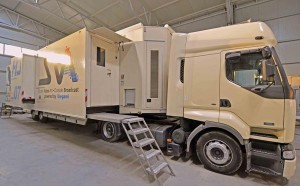 The Romanian independent production company Studio Video Art has equipped its newest flagship outside broadcasting (OB) truck with RTS intercom systems. An ADAM intercom matrix, KP modular keypanels and a BTR wireless intercom system will secure communications for broadcasts such as the next European football championship.

Studio Video Art is one of the first and biggest broadcast service providers in Romania. The Bucharest broadcast expert specialises in sport productions and has acted as host broadcaster for the qualifiers of the European football Championship 2016, the Romanian football league, and the Romanian Football Cup and Super Cup finals.

“We strive to combine the best available technologies, state-of-the-art equipment and professional service,” comments Bogdan Alexe, chief operating officer of Studio Video Art. Together with Romanian system integrators Magic Fox Media and Blitz Technology, the team from Studio Video Art devised a communication system built upon RTS equipment for the 20-camera OB7HD. The heart of communications in the expandable rolling control room is an RTS ADAM intercom matrix with 64 ports. The ADAM matrix is connected to KP-12 modular series keypanels. Additionally, an RTS BTR 800 wireless intercom system secures communication within and beyond the vehicle.

“The initial feedback on the OB7HD has been fantastic – not least because of the quality equipment installed,” confirms Alexe. “We are now looking forward to productions across Eastern Europe, during the European football championship as well as for qualification games for the 2018 World Cup.”