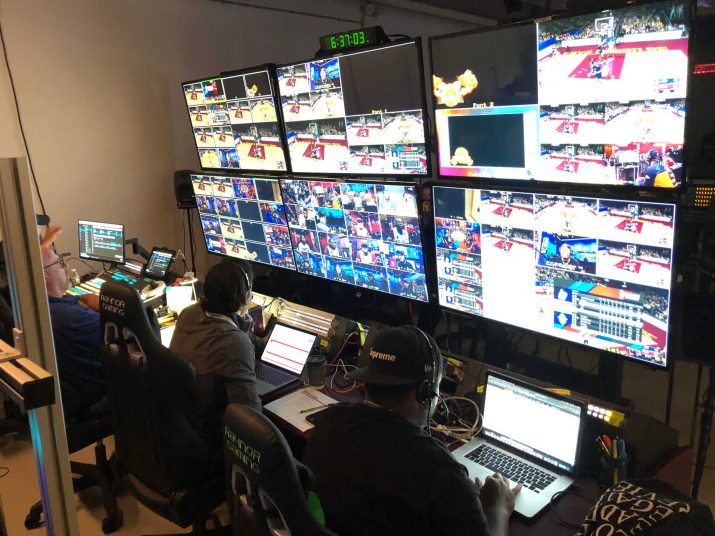 The NBA 2K League’s control room in June 2019 featured a Ross Video Carbonite production switcher at the front bench. Producer Chad Perry and director Rick Phillips (far left) were back for their second season with the league

The rebrand reflects the expansion of the division’s workload and the increasingly diverse nature of the projects being worked on. Stephan Repass, general manager of Ross Production Services, commented on the growth enjoyed by his team over the last seven years.

“We’ve really expanded since 2013 when our previous company was acquired by Ross Video, and the acquisition was an excellent springboard for growth. The team is bigger, we have more equipment and can manage even more complex productions than ever before. We launched our seventh production vehicle earlier this year and are already in the process of building our eighth; that’s a clear reflection of the hard work put in by everyone on the team and our relentless focus on customer service,” Repass said.

He added that this year it has not been smooth sailing for the crew with the COVID-19 pandemic and resultant lockdown: “We had a very full schedule of events right up until the beginning of lockdown, but then all live sports stopped, and our business went off a cliff overnight,” Repass noted. “Fortunately, the whole Ross business was in a very positive financial situation, so we used the time wisely to spring clean, learn some news skills and get ourselves ready for the inevitable restart. With sports beginning to come back online now, the business is returning and we’re absolutely ready to go.”

Speaking of a return to action, Ross Production Services is teaming up with the NBA to produce over seven weeks of WNBA games in Palmetto, Florida, starting 24 July.

It will also be producing three full weeks of World Team Tennis at The Greenbrier Resort in West Virginia from 12 July, as well as working with a brand-new sport league called Athletes Unlimited to produce 30 softball games over the course of five weeks, starting in August.

“There’s no doubt that we’ve been through a tough and very sobering period,” concluded Stephen Repass, “but we’re glad to be coming back and bringing some top action to sports fans everywhere.”