Ross Video has upgraded its sponsorship of SVG Europe from Gold to Platinum. The company believes that taking the top level of sponsorship will allow it to make its mark on the European sports broadcasting industry, repeating its US success.

Stuart Russell, EMEA marketing manager at Ross Video, commented: “Ross Video has enjoyed a long and fruitful relationship with SVG in North America and we’re very pleased to be strengthening our ties with SVG Europe by taking our next step and becoming a Platinum sponsor. 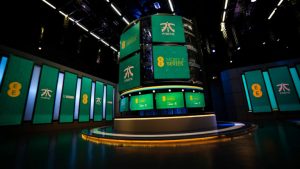 “I’m very conscious of the fact that Ross is an influential force in the sports market in the USA – Ross powers over 58% of NFL venues and 45% of combined venues for MLB, NBA, NFL, NHL and MLS – but we don’t yet have that same level of brand recognition or presence in Europe, despite some notable successes. I believe we have very interesting stories to tell as a brand, and SVG Europe provides us with a valuable forum to share these stories and explain how our expertise in live production can help our customers respond to the creative, business and technical challenges they face daily,” Russell noted.

He went on: “While there’s no doubt that sport is a lucrative business, teams, stadia and rights holders are not immune from commercial pressure. The in-stadium experience is under scrutiny like never before as teams try to tempt fans off their sofas and into venues, and there’s an understandable drive to increase (and more efficiently monetise,) fan engagement. In this competitive climate, content creators need technology partners who can help make their productions more creative and engaging without adding significant cost and complexity. SVG Europe provides us all – vendors and customers alike – with a framework to discuss these important issues and learn from each other’s experience while considering best practice and pitfalls along the way.”

With a track record spanning almost 45 years, Ross Video is dedicated to live production and has been ‘living live’ with customers since the business was founded by John Ross in Montreal, Canada. Now managed by John’s son David Ross, the company remains privately-owned and employs over 700 staff around the world, with offices in four continents. Its EMEA HQ is in Reading, UK.