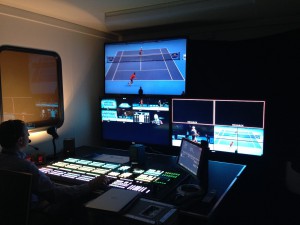 The ATP World Tour Finals have been running all this week at London’s O2 arena, with the sport’s top ranking players – including Murray, Federer and Djokavic – battling to end their competitive year on a high. As part of this year’s event, Ross Video was invited to partner with Gearhouse Broadcast to provide live 4K productions throughout the tournament.

Capable of switching SD, HD, 3G and 4K content, the Acuity looks set to become one of Ross Video’s most successful products and has consistently proven itself during a series of 4K technology demonstrations this year.

Simon Brooke has been working with Gearhouse Broadcast and the Acuity switcher all week and he notes: “What can I say about the Acuity? Flexible, powerful and it looks great too!”

Andy Newham, Ross Video’s business development manager for switchers in EMEA, adds: “This event has provided the ideal opportunity for us to demonstrate the power and performance of Acuity at the highest level of live 4K sport production. Live production is always a demanding environment, especially when it comes to sport, and Acuity has met all of the challenges faced this week with ease.”