The scale of the operation was very large, with multiple OBs in various locations in Windsor including Windsor Castle, two separate locations on The Long Walk (Domestic and Foreign Broadcast Compounds), and The Windsor Castle Pub. 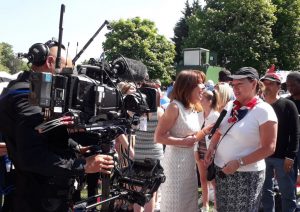 The Royal Wedding saw a reported 18 million Britons tune in, with the BBC enticing a peak audience of over 13 million, ITV almost four million, and Sky News, Sky One and BBC News programmes bringing in a further ½ million. Globally, the audience was massive, with an estimated 2 billion viewers, making it the fourth most watched Royal Wedding ever.

Broadcast RF supplied a bi-directional, multi-service, point-to-point link with full redundant backup, to connect the remote OB at the Windsor Castle Pub to the OB at the Long Walk Domestic Compound. This carried several video streams in each direction, along with program sound and multiple talkback channels.

A total of nine Broadcast RF engineers were deployed on-site. The early part of the rig at the Castle commenced on Tuesday 15 May, with the other sites following on consecutive days. Some positions were still being rigged on the afternoon of Friday 18 May — all running according to the pre-ordained schedule.

Within the mix of the 17 RF cameras supplied by BRF were seven new UHD RF systems, using Vislink HCAM HEVC transmitters, with BRF/Videosys camera control. Three of these were used by the BBC for the procession coverage, with Sky News taking the other four systems. 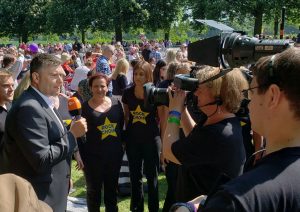 each system, to allow full UHD picture quality, required an RF channel that was twice as wide as a normal HD channel.

BRF’s project management team, Nick Fuller and James Halliday, spent the weeks in the run-up to the wedding poring over every detail of the plan, creating a thick file of project information, technical drawings, planning sheets and more, some of which were being amended only a few days before the rig began.

Fuller also put together a detailed wireless camera frequency plan, in conjunction with Ofcom PMSE, in order to fully allocate every available frequency for all RF operators. Ofcom PMSE weas able to open up access to more than the usual range of RF spectrum to help meet the needs of all the broadcasters and news organisations. Even with this extra capacity, there were literally no spare channels left on the day.

“Everyone did an outstanding job to pull off one of the highest profile jobs of the year,” said Broadcast RF Project Manager James Halliday, “from the folks back in the office and warehouse who organised staff and logistics and allocated, prepared and assembled all the kit for the job, to the engineers on site who worked incredibly hard — in an environment that was challenging in many ways.” 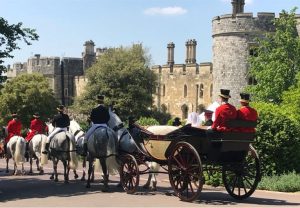 Jim Cathcart, ITN OB Engineering Manager Special Events said, “Let me take this opportunity to thank Broadcast RF for your usual fabulous work: like all of the Special Events crew we were overawed at what we were seeing. Please thank all the girls and boys from me, they were magnificent. Let’s do it all again sometime, but could we leave it for a little while?”

Michael Dugard from Prolink TV added, “I wanted to pass on grateful thanks to the whole BRF team involved in our RF set-up at the wedding. Special thanks to Nick for his work in advance and to the engineering excellence on-site. We had a pair of happy clients, a lovely event and fine weather – a perfect job.“