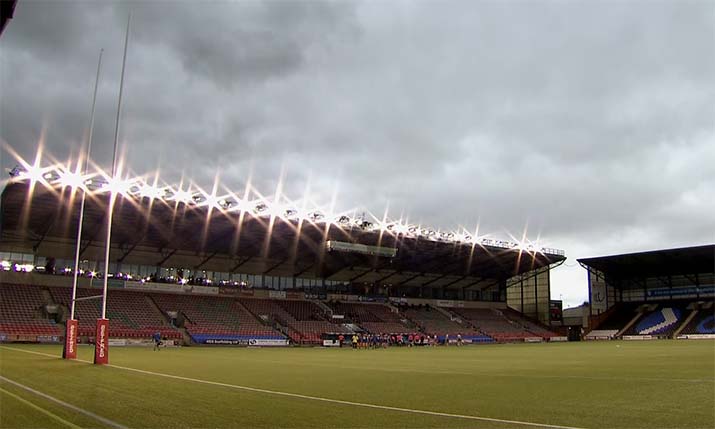 The Betfred Challenge Cup match between Widnes Vikings and Whitehaven was a completely remote production. Micron Video handled the cameras and Aviwest supplied the feeds back to the gallery over bonded cellular

There’s been a lot of interest in remote production and the promise it offers for wider coverage of sport. That potential is being fulfilled with the launch of a ‘Stream Gallery’ at EMG UK in High Wycombe. Unlike the other four remote galleries in operation by the company, this addition to the EMG UK ROC is different in that it is focused on live streaming using the ViBox All-In-One system from Simply Live.

This Stream ROC, which has been in use since March covering Rugby Football League (RFL) matches, is the brainchild of Neville Smith, founder of In Touch Productions and a 40-year veteran of sports broadcasting.

Smith’s history with Telegenic and EMG UK goes back to 1992 when he was executive producer/director of Sky Sports Rugby League, and the OB firm became its main facility provider for the next 28 years. Even before Sky was founded, Smith had championed rugby coverage, particularly rugby league, and is no stranger to utilising technology to further this goal; as part of the launch of Super League in 1996 he pioneered the use of the Video Referee. Smith left Sky on a high point in April 2019, as head of rugby league, but not before being enrolled onto the RFL Roll of Honour for ‘Outstanding Services to the Game’.

“We all learned a lot about remote production in that process,” Smith tells SVG Europe. “At the beginning of last year, I was about to sign a deal with Sky [for the Championship and Challenge Cup matches, and the Toronto home matches in Super League]. We did one match at the end of February and then, of course, COVID happened and a ball wasn’t kicked off for the rest of the year.”

Fast forward a year and the championship was set to kick off again, albeit in empty stadiums. “I was aware that the RFL was going to do more for the season ticket holders,” says Smith. “In the meantime, I got hold of the Simply Live kit, which I’ve been looking at for a couple of years.”

Along with his son Lachlan, a professional editor and replay operator, Smith familiarised himself with the remote solution, practicing on past matches. Impressed with the kit, he proposed using it to cover Championship matches for the Our League platform. This online pay-per-view platform is currently streaming matches for RFL season ticket holders until crowds are allowed back in. The RFL agreed and the gallery build swung into action. 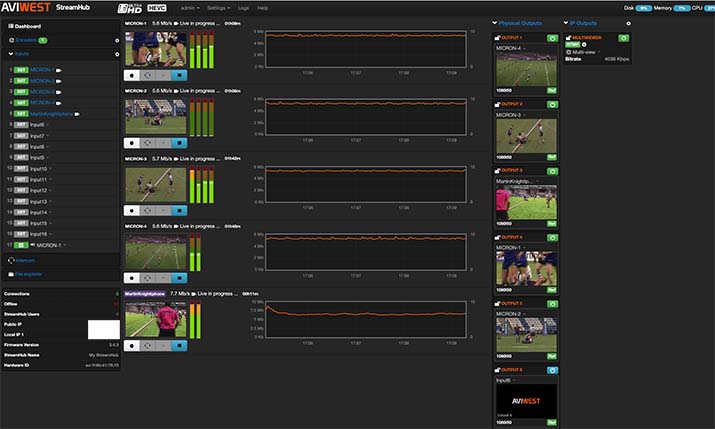 Eamonn Curtin, deputy CEO at Telegenic, says: “Building on the success of the three galleries which are servicing elite sports such as EPL and Rugby Union, we wanted to be able to offer a cost-effective solution for lower-level leagues such as Championship Rugby League. We tested different options with In Touch Productions and finally settled on the Simply Live solution and ‘Stream ROC’ was born.”

“EMG UK has been amazing in its support for this project,” says Smith. “They built the Stream ROC in a few short days, recognising the potential market that this sort of production is heading towards for the streaming market. Also offering critical support have been Aviwest, working with Micron Video to supply the camera streams and embedded audio from the venues, and Ce8 Graphics. All have been vital to help raise the bar for the RFL’s Our League platform.”

Remote coverage from the Stream ROC of the Betfred Challenge Cup kicked off at the beginning of March, and on the second weekend SVG was able to ‘sit in’ on a live stream. The game was a Second Round match where Widnes Vikings hosted Whitehaven.

A completely remote production, there was no truck at the ground. Instead Micron Video handled the cameras at the match, with Aviwest supplying the feeds back to the gallery over bonded cellular. “We had individual streams coming from the cameras,” says Smith. “We were not returning cue lights to them, but they were on the talkback, so [directing it] was just a case of being a little bit patient and not being over reactive to the match.”

Building on the previous, initial game of the season, where two cameras were used, Smith wanted to take things up a notch. “For the second game, I thought how can we replicate what we do with the full truck, using mini cameras or whatever else,” he says. “The Aviwest system allows you to stream iPhones, so we used an iPhone on a gimbal being operated by the floor manager for some of the shots on the night, such as from the players’ entrance and a little bit of coverage on the touchline.”

Following the Widnes game on the day, the team had access to a stream showing a multiview output of the six Aviwest sources, with four broadcast cameras into PRO380 transmitters, and two iPhones running the Aviwest MoJoPro app.

“Although there were four broadcast cameras, there was only three operators, with the wide shot just a mini camera mounted on top of the follow camera on a fixed lens,” explains Smith. “There are disciplined ways of cutting around that so it doesn’t show.” 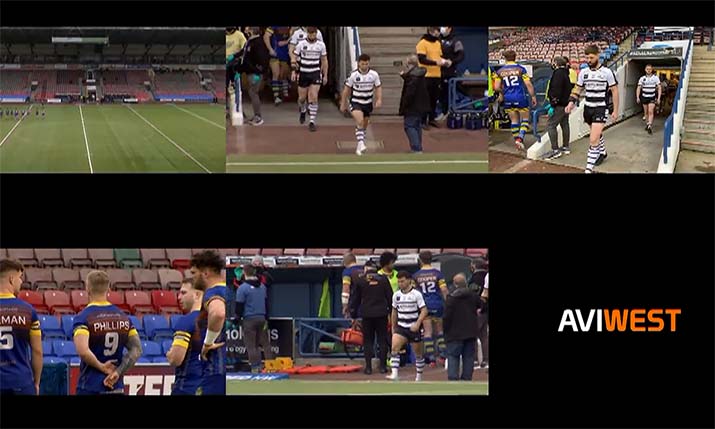 An iPhone on a gimbal was used for some of the shots in Widnes, such as from the players’ entrance and some touchline coverage

Smith’s long experience pays dividends when it comes to directing under remote conditions. “It’s just a different discipline from being in a truck at the ground where you’ve got absolute instant talkback and cue lights,” he says.

Another difference for the director is the signal latency.“What I learned with the latency when we did the Toronto matches is that you’ve got to discipline your directing and accept that the pictures are arriving about a second after they actually happened,” he explains. “So, when the ball is in play, you just cut the match as normal because the camera guys are following the ball. If play breaks down one of the things I tell them to do is just give me someone who has been near the ball, or involved with the play. So I tell the cameras, ‘Give me a close up, pick someone and then stick with him’, because that then gives me a bridge to get to the replay. I can come from the wide shot, and from the tight shot, to a close up of someone who has been involved, so the storytelling continues.

“The replay then gives us the breathing space to identify exactly what has happened and who’s been involved that way. The beautiful thing, as opposed to a big truck with all the monitors, is [the vision control] is right in front of you, so you’re always going to get there quickly. Same with the replays – as soon as it’s cued, I just punch it and it rolls the replay.” 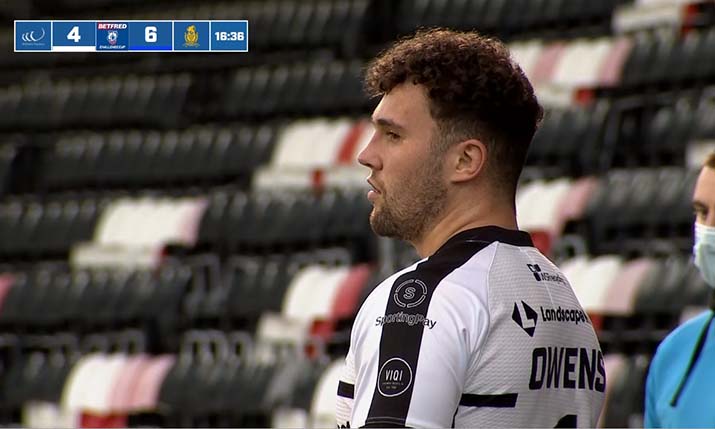 Smith says this increase in speed and versatility is welcome, but he doesn’t want to overdo it and have the viewer feel like they’re missing out on the match coverage. “That’s something that annoys me [as a viewer], if I feel like I’m losing ‘live time’,” he says. “But there’s always a beat in rugby league when the ball is out of play. When the player is tackled and the ball goes out of play, until he gets up and plays the ball, there is usually about a three-second window. So long as the replay is cued properly and you’re on the ball, there is time just to slam that in and then get back out to the geography and then back in for the next tackle.”

An external source, from Ce8 Graphics, feeds the Simply Live system with the onscreen graphics.

“The one thing we can’t do yet is accurately stop and start the clock,” says Smith. “The next level is having a timekeeper, with an iPad or similar, operating the clock remotely. I guess that that’s when we get into the world of the truck.”

However, Smith feels that the gallery can scale up when required. “From what are essentially two or four ENG cameras coming into us, we can scale up overnight to a truck and eight, nine, ten or twelve cameras, without any trouble. I just think it’s such an incredible piece of kit. I wouldn’t hesitate to do a Sky Sports coverage on it.”

“Also, by bringing it all into the hub, we can do two or three matches in a row with the same production team and with the same commentators [the commentators were in the gallery for the Widnes match]. With just an hour or so between the matches to regroup, get the team sheets and other information, the guys can go back in and do the same thing,” he continues.

“The next stage is to put commentators at home, which of course is happening in other sports, or if this develops with the rugby league, we might look at building a commentary hub in the RFL offices in Manchester, which would be easier for them as well as checking the carbon footprint box of course, which is really important.”

“What we’re trying to open up here is the possibility to go into other federations and other sporting bodies who don’t necessarily have the infrastructure or the platforms yet [for remote production],” says Smith. “The hardest thing has been getting the chance to prove a model. Now we’ve done it. We’ve proved it works.”