Japan 2019 was the most economically successful Rugby World Cup ever, with nearly £4.3 billion generated in economic output according a ‘The economic impact of Rugby World Cup 2019’ report just published by EY.

Rugby World Cup 2019 has been heralded as the best to date, delivering a unique experience for visiting fans, showcasing Japan’s renowned culture and spirit of Omotenashi and significantly boosting national pride. 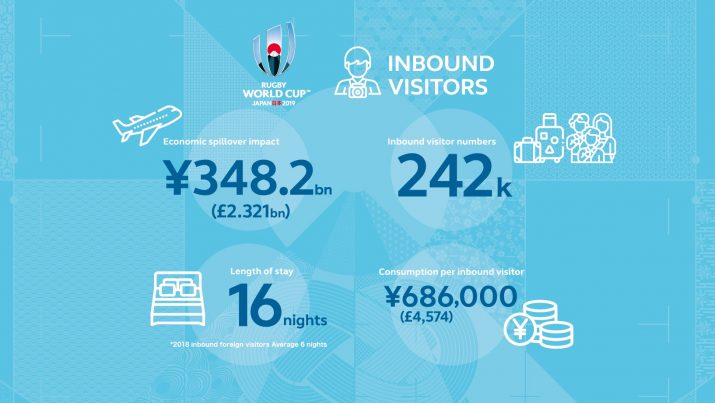 The 44-day global celebration of rugby, hosted across 12 cities the length and breadth of Japan, captured the imagination of a nation and fans around the world. It was the most competitive, best attended, most viewed, most socially engaged and most commercially successful of the nine men’s tournaments to date and the biggest sporting event of 2019.

Rugby World Cup 2019 was also one of the most economically successful events in Japanese sporting history, underscoring the nationwide approach to host Asia’s first tournament.

The EY report, launched during a special webinar event in Tokyo, outlines how Rugby World Cup 2019 generated £4.3 billion in output and added £2.3 billion to Japan’s GDP. It attracted 242,000 international fans from 178 nations, who stayed an average of 17 days, visiting five cities on average. More than 60 per cent of fans were visiting the country for the first time, while their daily spend was 4.6 times higher than that spent by the average visitor to Japan in 2018.

Aside from a record economic impact footprint that reached from Sapporo in the north to Kumamoto in the south, the tournament also created or sustained 46,000 jobs and 13,000 volunteer roles, many of whom will be supporting Tokyo 2020.

The host’s ticketing strategy also proved successful with a total of 1.83 million tickets sold. The 99 per 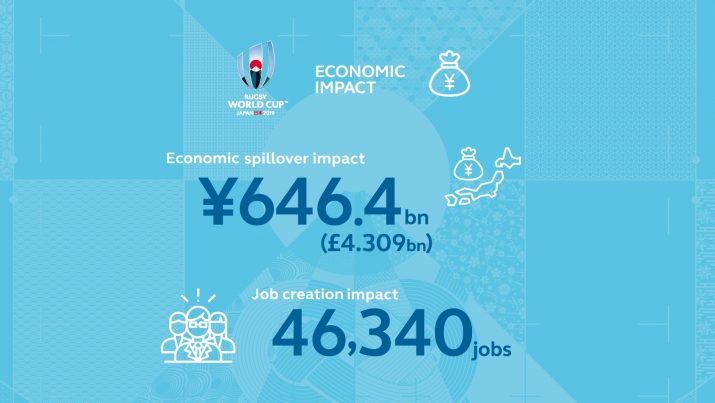 cent attendance versus capacity rate across the 45 matches is the most successful in Rugby World Cup history and among the most successful major sports events of all time. It was the biggest single-sport event ever held in Japan. In addition, a record 1.13 million fans attended one or more of the 16 official fanzones despite two typhoons during the event.

Stadia packed with Japanese fans (more than 50 per cent attending a rugby match for the first time) combined with joyous overseas fans created a special atmosphere, The performance of Japan’s national team – the Brave Blossoms – in reaching the quarter-finals for the first time played a leading role in boosting national pride with 90 per cent of people in Japan believing that hosting captured the nation’s imagination, boosting pride, excitement and engagement.

With 769,000 children in Japan introduced to tag rugby in school because of the tournament and a strong performance by the national team, Japan Rugby Football Union President Shigetaka Mori says that Rugby World Cup 2019 will continue to be a catalyst for rugby participation, popularity and profile in Japan.

“I would like to express my most sincere appreciation to everyone involved in the success of Rugby World Cup 2019”, he said.

“I am forever grateful that Rugby World Cup was held in Japan, resulting in the increasing popularity of the game and more people than ever becoming familiar with the beauty of our beloved sport. With enthusiastic cheers from all over Japan, the Japan national team made history by powering their way to the quarter-finals, the highest Rugby World Cup finish they have ever achieved.

“We are determined to make sure that the valuable legacy left by this immeasurably successful tournament will live on, and we will continue to strive to make rugby a well-loved national sport in our country. If the opportunity arose again, we would be eager to demonstrate our intention to bid for future Rugby World Cups and make the Japan national team the world’s best team.”