The Ruptly service offers unlimited access to 80,000-plus stories to digital publishers for €12.50 a month. “There is a significant client base which is finding it hard to make money on their channels online,” said chief commercial officer Matthew Tabaccos.

“This will enable smaller entities to gain access to high-quality content that they would never be able to get, because of high prices and inaccessibility.”

He believes the price of Ruptly Pass, which is €125 per year, is “very competitive with the break models of OTT.” 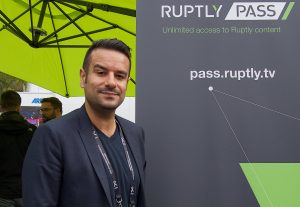 Ruptly publishes some 40 new video stories daily, including various sports news items, provided by a 3,000-strong network of video journalists from over 100 countries. It also offers about five live events each day via the live.ruptly.tv platform, including sports coverage, such as pre- or post-match press conferences. A collection of 360º videos and some longer-form content are included in the Ruptly Pass subscription.

Ruptly has also invested in two compact UHD OB and DSNG vans, which have been designed for versatile, file-based production.

Both are based on a Mercedes Sprinter and weigh less than 3.5 tonnes without making concessions in terms of fully-featured technical equipment. They were designed to be manoeuvrable, flexible and to be driven with a normal car driver’s licence, which integrators Qvest Media managed to deliver using to a novel body and lightweight construction method developed with Carrosserie Akkermans.

The vans were first used at the World Cup and are equipped with three Arri Amira UHD cameras each, 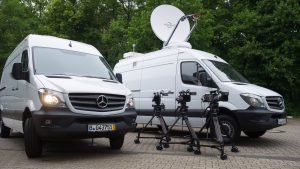 CueScript teleprompters and Canon lenses, which means they can not only do live news or sports, but also cine-look productions. They also have a 4K/UHD video mixer from For-A, a Yamaha audio mixer and an AJA 4K ingest and playout server.

The project demonstrates that “a high level of technical quality can be achieved with competitive budgets even when space is at a premium”, said Norman Tettenborn, Principal, Qvest Media.

The two vans can be used together as one integrated production unit using Riedel’s real-time network MediorNet, with the decentralised router distributing audio and video between the OB, DSNG and integrated stage boxes. The live feed is broadcast via a fully redundant Vislink NewSwift uplink.

“The vans passed the baptism of fire during the World Cup in Russia without a hitch and made our reporting considerably easier,” said Ahmet Cakan, Ruptly’s CTO.