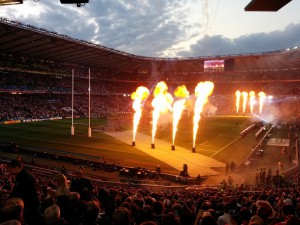 Hundreds of live events pass over Akamai’s content delivery network each year, so in many ways the Rugby World Cup (RWC) Opening Ceremony at Twickenham was just so much routine. The company is delivering the live streams of the RWC for a number of broadcasters including ITV (ITV handles the encoding at Grays Inn Road before ingesting onto Akamai’s platform) in partnership with Perform Group, which is packaging the live streams with its Opta Sports data stream.

However, Akamai had a message. The world’s internet networks are about to buckle under the strain of 4K video unless fundamental changes are made to its architecture.

“We have 190,000 servers in about 1400 networks and 110 countries. That puts us at a scale which is unsurpassed,” said Ian Munford, director of product marketing and enablement, Media Services, EMEA (former commercial director Dock 10).

More than 20 percent of all internet traffic traverses across its networks made of 2 trillion requests a day or 30 Terabytes of data per second. Impressive stuff but what Akamai was using the Rugby World Cup to tell us was that this was nowhere near enough.

“We are watching a different era starting to appear,” said James Taylor, director of Media Services EMEA. “Currently over 60% of all content travelling on the internet is related to some sort of media file. The standard today is to deliver 1080p content with eight bits of colour data at a 30 fps data rate. The next step will be UHD and we need to be ready.”

Munford added that the growth of VOD and the widespread penetration of mobile devices and smart TVs has increased consumer demand.

“As viewers start to pay for not just live events but for monthly subscriptions to various VOD services – they expect a better experience. Historically they have been accepting of poor performance, of buffering. Now they expect the site to deliver value in information, in the way it is presented, the whole editorial package. They expect quality and always on reliability. They expect, for want of a better word, broadcast.”

Akamai is imagining a time in the near-future where 500 million viewers will ‘tune in’ online at primetime to watch live content. It is already seeing a 61% CAGR of traffic a year. Traffic during the FIFA World Cup of 2010 was 22 Petabyte, which grew 10x to 222 Petabytes for the same event in 2014.

Coincidentally, the estimated worldwide audience (broadcast and live streamed combined) for the Opening Ceremony and first match England vs Fiji is 450 million.

“3Mbps is reasonable quality now but it’s nowhere near enough for 4K,” said Munford. “We think with 500 million viewers watching online we need 1500 Terabytes per second. Today we do 32TB per second, so you can see the huge gap we have to bridge. The average stream which viewers will be able to get will increase dramatically. 1500TB is very real and coming at us very fast.”

So what are Akamai going to do about it? “We could throw more servers at the problem – and we probably will,” he said. “We could be more efficient with our core software that moves content through the internet and we will do that too. But we have a more defined four-pronged strategy. Broadly, this is to think about a range of new technology which helps improve the quality and the scale at which we can deliver content and improves reliability.”

Combined with Forward Error Correction and advanced congestion control, HTTP/UDP is viewed as a way to prevent packet loss and reduce latency, and so speed the transit of content through the internet and make it easier to handle unpredictable peaks within the CDN.

The technology itself has delivered a 250% improvement in throughput in some countries, said Akamai.

The second key is peer-assisted delivery, which means getting video from peer devices instead of direct from a server. This is considered efficient for live and popular VOD content and the company says that today’s adaptive bitrate streaming formats lend themselves to this technology. “We are working to use realtime web communications (WebRTC) capability to improve the ability to scale using the power of local networks to deliver content,” said Munford.

The third key is multicasting, a mechanism to deal with the huge challenge in terms of delivering high quality video at huge scale. The use of multicasting would require agreements with telcos and cable operators, and it is envisaged that it could be used for events that require high streaming capacity, like sports and live news events, or maybe prime time television or special VOD launches.

“We are working with networks to drive the benefits of multicast enabled delivery,” said Munford.

The fourth technology pillar is pre-positioning of content. Munford explains: “If we know there is a large event taking place such as the Rugby World Cup, we are looking at the concept of pre-positioning content at the edge of the CDN to by-pass unpredictable events.

“From a consumer perspective, the expectation is for a television-like experience, which means immediacy. Pre-positioning allows us to be quite smart about how we move certain content pro-actively to the edge rather than being reactive, which is how caching works.”

It’s not just talk, Munford says. The April acquisition by Akamai of Octoshape is intended to optimise the quality of streams for OTT delivery.

“As we go forward we will develop more and more of these technologies and you will see a lot more activity from us in terms of live workflow especially around sports,” says Munford.

“In so doing you will see a transition from broadcast toward IP because unlike broadcast the internet is not a limited platform but one that allows editorial to be creative with the experience. And people will pay for that better experience.”

The 500 million audience figure is even on the conservative side. Akamai’s CEO and co-founder, Tom Leighton, has talked about 2 billion in primetime.

“That massive jump in scale is not too far away,” said Taylor. “The internet fundamentally has to change its architecture to meet that primetime viewership. It’s an arms race in terms of technology and in economics.”