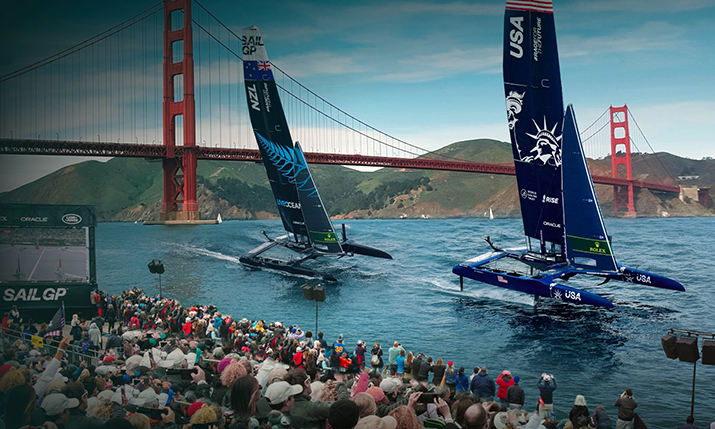 SailGP has bolstered its international broadcast offerings with the announcement of new broadcast partners for season three of the championship. This is as the league prepares to launch its season at the Bermuda Sail Grand Prix presented by Hamilton Princess on 14 and 15 May, and continues to celebrate its outstanding broadcast results from season two.

The league reported a total broadcast audience (dedicated and secondary) increase of 220% to 823.4 million viewers in season two, with the dedicated broadcast audience of 39.2 million representing a 131% increase. There were also 16 million event live stream views on SailGP’s digital platforms, including YouTube and Facebook, with a total watch time of 2.5 million hours.

Now more viewers than ever can enjoy the on-water action, which will not only be broadcast live globally, but SailGP highlights will be available in a new pan-regional deal with international sports broadcasting powerhouse Eurosport. The new deals were facilitated by IMG, SailGP’s global agency for media rights, sponsorship and host venue rights.

As two new teams join the league in Canada and Switzerland, both of those territories also welcome new broadcast partners, with TSN and RDS in Canada and Blue in Switzerland both carrying the new season live. They join the other key broadcasters in SailGP home-team markets, including Sky Sports in the UK, CBS Sports in the US, Foxtel and Kayo Sports in Australia, Canal+ in France, JSports in Japan, Sky Sports in New Zealand, RTVE and TV3 in Spain and TV2 Sport in Denmark.

Also, new for this season, SailGP events will be available in Turkey and across South East Asia on BeIn Sports and a pan Asian deal with Eclat will see the action in more homes in the region than ever before. Italian fans can watch on new Italian broadcast partner Eleven Sports and continue to watch selected events live on Sky Sports Italia. Sport24 in Portugal will also carry the next two seasons of the championship. As always all of the action can be viewed on SailGP’s award-winning app, as well as YouTube and Facebook.

Lawton will lead the team delivering SailGP’s global broadcast offering, from the live broadcast production and host broadcast feed to non-live content creation including SailGP’s docu-series Racing on the Edge.

Lawton was previously responsible for sports production at Meta, home of Facebook. Lawton joined Meta after five years as the head of live content at Red Bull Media House, and her 20-year career has encompassed long term production roles on events such as the Beijing and Sydney Olympics, FIFA World Cup in Korea and Japan, and Commonwealth Games in India.

Lawton said: “I’m proud to be joining the impressive and exciting journey of one of the world’s fastest-growing sports properties and look forward to working with all of our broadcast partners to provide their audiences with compelling and unique content as SailGP enters season three.”

With over 30,000 data points coming out of an F50, there will truly be something for everyone on SailGP Insights and the broadcast, from the typical race information on a boat’s position, time and current leg, to more in-depth technical data to enable fans to get true insights on what it takes to compete at the highest level and the complexities of the hydrofoiling F50.

SailGP chief commercial officer, Andrew Thompson said: “It’s a fantastic achievement that in just its third season SailGP is forging lasting partnerships with some of the biggest global names in sports broadcasting. Our championship is a truly global league with fans around the world able to enjoy the most exciting racing on-water live and in full wherever they live.”

Adam Kelly, co-president of media and events at IMG, said: “In its third season, we are proud to help bring SailGP to more viewers than ever through a number of new broadcast deals signed in key international territories with Eurosport, TSN, RDS and BEIN Sports. SailGP is a thrilling spectacle to watch and this weekend fans around the world will be transported to Bermuda as top global broadcasters bring the intense, high-speed action to life.”