Sam Blackman, co-founder of Elemental Technologies, now known as AWS Elemental following its acquisition by Amazon Web Services, has died of sudden cardiac arrest at the age of 41. He is survived by his wife Adriane and two sons. 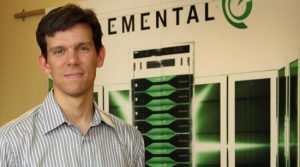 Sam Blackman, AWS Elemental CEO, died this weekend at the age of 41.

“Sam died peacefully yesterday surrounded by his loved ones,” his family said in a statement. “In his private life, he cherished his family, and in his public life he cherished his community and the business he founded, Elemental Technologies. He was a passionate advocate for community service who rallied so many towards a greater good for the environment, hunger, education and inclusion. We are thankful to all those who have shared their thoughts and prayers for Sam. We ask that you respect our privacy during this time of grief.”

Within the Sports Video Group community Blackman could be seen at various events and also did his part in being a part of the association’s panel discussions and more. Last summer he hosted an event in Rio during the Summer Olympics that provided journalists from around the globe a chance to understand the important role AWS Elemental was playing for live streaming efforts at the games.

“AWS Elemental has lost a passionate, visionary and humble leader and the world has lost an inspiring human being dedicated to community,” the company said in a written statement. “Sam’s spirit will always be at the core of what we do. Sam loved his work, but his greatest love was for his wife and children. Our thoughts are with his family and all those he touched on his journey.”

The Blackman family has asked that donations be made in lieu of flowers to three places. These organizations cover the areas he was most focused on giving back – hunger, the environment, education.

He led Elemental Technologies from tiny startup to one of the city’s major employers before selling it to Amazon in 2015 for $296 million. He stayed on as CEO.

“Sam brought energy, innovation, and jobs to an important and fast growing sector of Oregon’s economy,” she said. “But, more importantly, he did so with a commitment to Oregon’s values. As CEO of Elemental and later with Amazon, he led the company to grow financially while engaging civically on issues like education, hunger, and the environment. Sam’s approach made Oregonians stronger while helping build the economy that they rely on. My heart is with his family and friends today, and I thank him for the important contributions he made to the entire state.”

His commitment to Oregon and entrepreneurship resulted in being recognized by the Oregon League of Conservation Voters as a Volunteer of the Year, by 1000 Friends of Oregon as one of “35 Innovators Under 35″ and by the Portland Business Journal as the most admired CEO in technology and one of forty outstanding leaders under forty. He was also the recipient of the Tom Holce Award for Individual Achievement from the Oregon Entrepreneurs Network and was named startup CEO of the year award by GeekWire.

After graduating from Brown University and earning a master’s degree at the University of California at Berkeley, Blackman went to work as an engineer for Pixelworks, then a promising video technology startup.

Blackman left in 2006 with colleagues to start Elemental, which capitalized on the surging demand for streaming video over the internet. It’s growing presence in the marketplace and commitment to quality led to its acquisition in 2015 by Amazon Web Services.

“Elemental shares Amazon’s passion for invention and putting the customer first,” said Andy Jassy, Senior Vice President of Amazon Web Services at the time. “Together, we’ll collaborate on deeper technology integrations and new infrastructure offerings so that media and entertainment companies can evolve their hybrid and cloud models as they continue to innovate their services for viewers.”

After selling to Amazon last year, Blackman said he hoped the deal would be a draw to other tech companies and investors, bringing new opportunities to the city.

“This one, I hope, is something that draws a lot of eyes to what Portland engineers and Portland entrepreneurs can build,” Blackman said in 2015. “The teams here are building such great technologies. I really think this is just the beginning.”

Today AWS Elemental clients include ABC, BBC, Comcast, Major League Baseball, PBS and Sky. Just last week the company opened a new office in Portland that brought the Amazon and Elemental teams under one roof, a move designed to take the company to the next level. But Blackman’s goal was also to do the same for the people of Portland.

“One of my big goals for the company is to prove that Portland is a good place to grow and invest for the long term,” Blackman told The Oregonian.