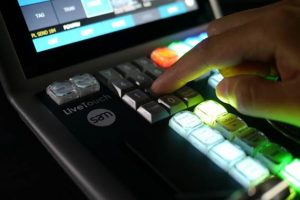 On December 19 SAM will host a LiveTouch Challenge event in central London to give operators a chance to learn how to optimise their use of the replay system while competing against their peers. Ahead of the event, SAM EVP and General Manager, Media Software Solutions, Neil Maycock spoke to SVG Europe – which is supporting the Challenge event – about getting acquainted with LiveTouch and its current deployment by F1.

Now an established part of the replay market, LiveTouch has been shown “to be easy to learn for existing operators, as proved by F1 this season,” says Maycock. “F1 used local talent to run the LiveTouch replay systems and the they were only given a couple of hours in the morning of each race to learn how to operate it. With less than half a day to learn, the replay operators were able to cut together one of the fastest, most demanding live sports productions anywhere in the world.”

Outlining the structure of the Challenge event, Maycock notes that “as well as speed we are also going to challenge how creative operators can be when you take away the traditional constraints of replay systems. LiveTouch has the ability to access all the media, from all the sources, from any station as well as fully loaded edit seat, so operators have no restrictions on what they can do with the media to stamp their own style on the output. The only limits are their own creative ones.”

The LiveTouch Head to Head Challenge will be staged at Soho House, 76 Dean Street, London, W1D 3SQ on Tuesday 19 December.

The event will include:

·        Training from 16:30 till 18:00 – the chance to learn essential replay functions such as clipping highlights, playback and building playlist sequences;

·        Then the Challenge will begin with participants pitting themselves against their peers to create the fastest highlights and the most compelling playlist sequences.

LiveTouch is the world’s fastest, most intuitive live sports and replay system, and is used by BT Sport, Formula One and other leading broadcasters. The overall Challenge winner will have the chance to win an iPhone X. The challenge will be judged by executives from Snell Advanced Media.

The deadline to enter is Dec 5. Places are limited so sign up now to secure your spot at www.s-a-m.com/livetouch-head2head.