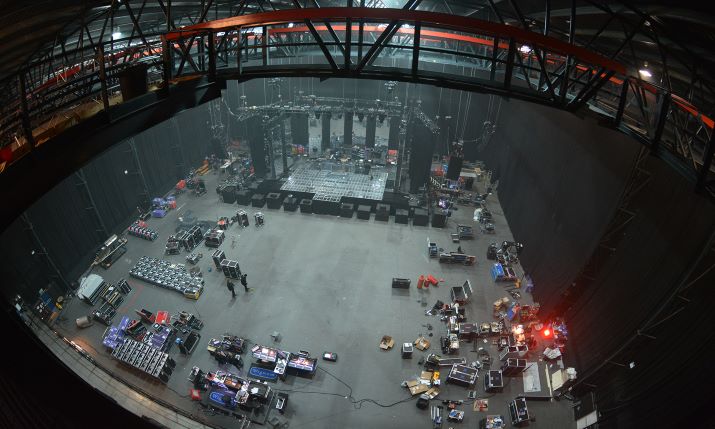 As part of the long-term loan agreement, Sennheiser supplied a mixture of evolution wireless G3 and G4 systems as well as IEMs to Backstage Academy

Sennheiser has partnered with the Backstage Academy in a long-term education partnership as part of its commitment to the UK sound industry’s future talent.

The audio expert will be offering a range of audio equipment to Backstage Academy for the audio professionals of tomorrow to hone their skills on.

Founded in July 2009 by Adrian Brooks, known for developing the world’s first lightweight aluminium trussing system back in 1981, Backstage Academy quickly earned an international reputation as a centre of excellence for backstage training, specialising in degree courses, professional short courses and bespoke training programmes for the booming live events industry.

For over ten years, Backstage has been praised for using best-in-class technology and equipment in state-of-the-art studio spaces, offering its students the opportunity to experience the industry first-hand by working side-by-side with leading professionals across the campus at the Production Park, a live events destination in the heart of Yorkshire.

“Backstage was born out of the need for personnel,” said Miles Marsden, industry partnerships director at Backstage Academy. “We had built Studio 001 at Production Park, but we were finding that people were disappearing on tours all the time. We decided to grow our own staff, one that is passionate about educating the next generation and would allow us to bring new blood into an industry that was quite mature. When today’s 50 and 60 years olds, who tend to be the leaders of this industry now, started on this journey, it was very amateurish. Now it has developed and professionalised. Backstage Academy is a great example of that.”

The Academy has gone from strength to strength, and now accepts 100 students per year across its three degree courses.

“We have a Live Events Production degree, which includes just over 70% of our students,” said Jack Scarr, marketing and commercial director at Backstage Academy. “This particular course has four pathways; Live Sound, Lighting, Live Visuals, which includes LED video walls and projection mapping among other areas, and at the far end there is Event Business. There are also courses on Stage and Production Management and Live Visual Design and Production.

Frazer Gall, the Academy’s Live Events Production lecturer, explained the key benefits of forming a relationship with Sennheiser: “The main value is that students get a wide range of microphones that don’t just show them one path, but the variety of different types of mic sub-categories available.

“Sennheiser is one of the biggest microphones and headphones manufacturers in the world, so it gives students a chance to use the equipment they’re likely to be using from the outset when they walk into their jobs. I don’t know any hire company that I have worked with that doesn’t stock some form of Sennheiser product.”

Another benefit, as the team agreed, is the exposure that students get not only to the brand and products, but also to the Sennheiser team, which works closely with Backstage Academy and bring their wealth of industry knowledge with them. “It’s also a great networking opportunity for the students,” added Scarr.

“We think it is very important to make the students aware of the range of job roles that are available because most of students come saying, ‘I’d like to do FOH sound’, or ‘I want to be a lighting or video designer’,” continued Gall. “Obviously, there is a much wider range of jobs that also includes after-sales support, manufacturing, and R&D, so it is great working with Sennheiser, as students get direct exposure to its staff and become further aware of a company’s internal structure and job roles.”

As part of the long term loan agreement, Sennheiser supplied a mixture of evolution wireless G3 and G4 systems as well as IEMs, with a view that this will benefit students by them getting experience with a wide range of microphones for different scenarios and applications.

“From the outset, the first year Sound module the students cover detail on how a microphone works. Having a range of Sennheiser mics of all the different types helps them understand different pick up patterns and mic applications,” noted Gall.

“In the second year, they’re actually working with live bands, as they are setting up outside now, so it helps the students to decide which microphone would be best to use; whether it’d be better to use a super or hypercardioid for that little bit of extra ambience, or if they should be using particular types of drum kit microphones. By the time they’re in the third year, they’re accumulating an in-depth understanding of RF and they should be able to set up RF for both in-ears and microphone systems – so there is a wide range of applications where the microphones and the radio equipment are being used.”

Before the pandemic hit the country, the Backstage Academy team had run their first class using Sennheiser’s e935 and e945 mics, comparing how each mic’s pick-up pattern affected the performance of three vocalists visiting from Leeds Beckett College.

Andy Egerton, Sennheiser’s artist relations manager, said: “Backstage Academy is offering its students a real taste of the industry. I would have loved to be doing this as a student. This quality of audio equipment and RF technology wasn’t available when I went to university. The advancement of this equipment and the teaching to deliver it validates just how valuable it is. I have already started encountering Backstage’s ex-students, who are getting in touch with me via the companies that they are currently working with. That proves this place is a success.”

“It was pretty obvious to me that Sennheiser had a real desire to be involved in the education of the upcoming talent, so, to my mind, it’s a marriage made in heaven,” concluded Marsden. “This partnership encapsulates what we aspire to at the Backstage Academy. We are helping to create tomorrow’s users, hirers and specifiers. What more could we want?”