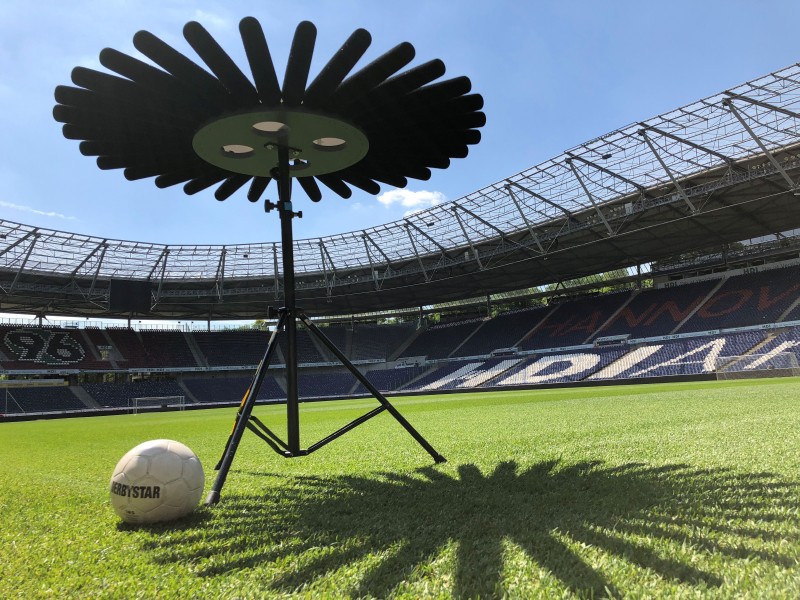 Sennheiser has developed a prototype device for capturing sports sound effects cleanly and discretely enough to meet the needs of object-based broadcast formats.

Referred to generically as the Sports Microphone Array, the system, which is currently nearing a beta stage, consists of a circular array of 31 MKH8070 shotgun microphones.

The purpose of the array is to capture sports sound effects that are sufficiently discrete and pristine to be used as audio objects for immersive formats, such as Dolby Atmos and MPEG-H.

Even though the circular arrays are intended to be positioned along the perimeters of playing fields, the transducers that aren’t facing the actual playing field will take in other ambient and specific sound elements, such as crowd noise, enabling the system’s processor to more precisely distinguish and isolate the desired effects sounds and feed them to the downstream processing that will create immersive soundscapes.

The Sports Microphone Array currently uses the same locational data as Lawo’s Kick system, software that lets its consoles “follow” a football’s path around a field by automatically opening the faders on channels whose field microphones are closest to the position of the ball.

That tracking data is derived from ChyronHego’s camera-based TRACAB tracking system, which generates official match data for the German Bundesliga, which is using the Kick system.

However, according to Brian Glasscock, project manager for the AMBEO Immersive Audio initiative, the Sports Microphone Array could theoretically use similar types of data collected in any number of ways by any sports organization or league.

Benefits of the Circular Array

The circular design prevents off-axis spots in field coverage and will increase low-frequency response and directivity, parameters that current effects-gathering techniques fall short in when applied to immersive audio. Among other issues it resolves are low signal-to-noise ratios resulting from the fixed directivity of individual effects microphones and the distance between those mics, which can create comb-filtering effects due to the different arrival times of the sound waves at each microphone, adversely affecting sonic tonality.

The density of coverage of the circular array creates a beam-forming effect that allows the audio to follow, for instance, a soccer ball, basketball, or even a hockey puck at the equivalent of a high frame rate, making transitions between the individual transducers virtually seamless and doing so at 40-60 ms of latency. That, says the array’s developer, will allow A1s mixing a game in an immersive format to focus on the overall mix instead of on each individual element.

The prototype of the array has been deployed in Europe for testing in conjunction with the Kick software, as the AMBEO team begins to define how the array will fit into the emerging workflow for immersive broadcast audio.

The circumference of the array is currently 1.5 meters, although it will be more compact in the future, explained Glasscock, adding that the concept has been discussed with a number of teams and leagues in the U.S., where it can translate to conventional broadcast sports here without any issues.

The Future of the Project

When the circular array will become a product and what it will cost are to be determined.

“What we do know is that the immersive-sound market has a need for a way to achieve a clean feed for audio objects free of crowd sound and other noise,” said Renato Pellegrini, an entrepreneur and PhD in immersive-sound technologies, who joined the Sennheiser AMBEO team in 2017 to lead development of immersive-audio–capture solutions for broadcast sports.

“If the [effects audio] is already part of the mix, you can’t use those effects as individual objects. This is a way to make that clean feed happen. That’s the value of this to [broadcast-sports producers].”

According to Glasscock, the circular array could also help accelerate uptake of immersive-audio formats in the U.S. and elsewhere because it provides ready-made effects audio that will translate easily into the objects that immersive and personalized broadcast-audio formats are seeking.

“It’s been a long-term dream to take the kind of object audio that’s now regularly used in cinemas, which were rendered in postproduction, and make that available for live television,” he explains, noting that the circular-array approach outperforms existing sound-capture approaches and simplifies the workflow for object-oriented mixing. “We think we’re almost there.”