New normal: The bigger the vehicle, the more suitable it is for match coverage

The weekend of 20-21 June marks the re-start of the Italian top flight, Serie A, following the long pause caused by the coronavirus pandemic. The season resumes with Torino taking on Parma and Verona up against Cagliari on Saturday 20 June, while Atlanta v Sassuolo and Inter v Sampdoria will take place on 21 June.

The company responsible for the television production of Atalanta v Sassuolo is NVP Spa, a well-known service provider with offices in Milan, Rome and San Piero Patti in Sicily.

“We had a very careful approach since the beginning,” NVP chief technology officer Ivan Pintabona told SVG Europe, “not least in consideration of the fact that we were the last TV service to work on both Serie A football and the Cups – since we worked on the last matches on the fields of Bergamo and Sassuolo. 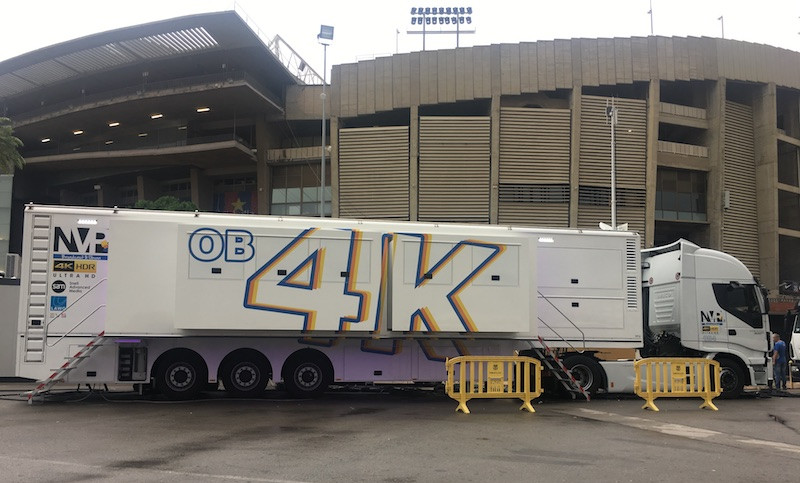 “From the beginning, we have adopted social distancing measures and others as required by the various PPE and fortunately we have not had even one case of infection by coronavirus among our operatives and freelancers. Then we increased all the prevention procedures following the guidelines of the various scientific committees.

“So, in addition to distancing, we immediately applied pre- and post-sanitation which became standard procedure. Among these we used ozonisers before and after events and UV lamps to sterilise the place,” he said.

“In addition, we immediately applied the new layout of the vehicles required by the Football League which, compared to the previous guidelines in standards A and B (now abolished), today requires standards C and D providing for a metre and a half of distance between the different operating areas.

These powerful trucks were re-designed regarding layout of the personnel on board, given the great availability of space, and they also provide for the use of bulkheads that isolate laterally — and more, thanks to a transparent plastic material that is more malleable than plexiglass. Needless to say, operators wear masks all the time and use gels and gloves.

The ‘new normal’ required by the Lega Calcio refers to guidelines on operations involving people engaged simultaneously in the various areas on board and in the TV compound. It also involves playing times and marks many general precautionary guidelines that should be taken. The reduced production format foresees a smaller number of cameras, only ten, as used in the past for smaller matches.

In this case, OB4 is hired for 20 June with the reduced number of cameras shooting in HD. Around 30 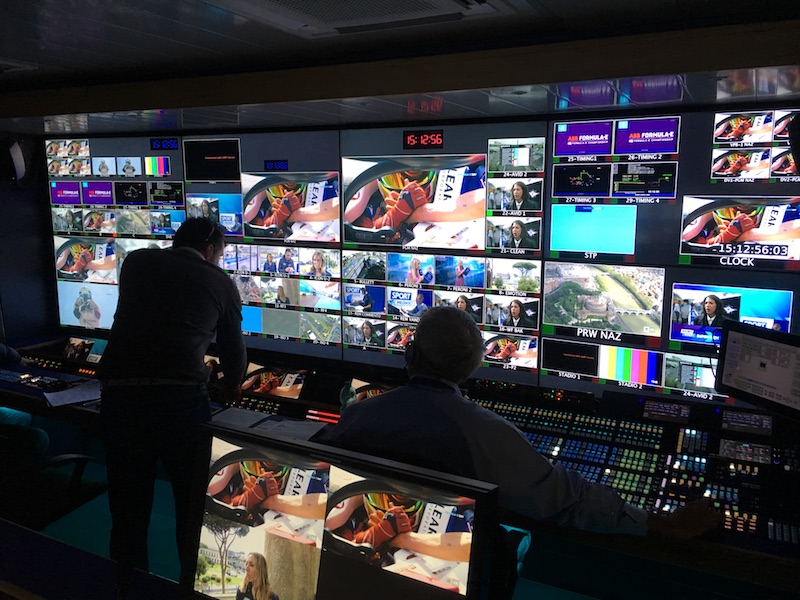 people including cameramen will be engaged. The consequent reduced impact of the match, also linked to the absence of fans in the stadium stands, suggests that the Lega Calcio will try to field something new and alternative to enrich the television product — even if, at the time of writing, there was still no official announcement.

Another change due to the ‘new normal’ is that the integration on board the vehicle will not be hosted — despite the double gallery availability — as would normally have happened previously. Instead it is carried out by an independent external vehicle.

Ivan Pintabona said: “We could deploy a smaller mobile vehicle with similar technical capabilities, always enabled to shoot Serie A: however we prefer to rely on one of our larger vehicles because the availability of space on board allows an optimal spacing among working areas.

“In practice, today the trend has reversed compared to the past: the bigger the vehicle, the more suitable it is: that is, no one is going in the direction of using smaller vehicles.”

The OB van is also expected to work with the doors of the control rooms open, despite air conditioning, pre-ozonisation and sanitation of the areas involved. Three feeds will be produced: national, an international second and a third feed with different graphics to allow the inclusion of different sponsors depending on the geographical areas of further rights holders. All graphics will be applied downstream, in the operations centre.

Pintabona resumed: “Up until today (8 June) we have witnessed several proposals that seek to increase the level of ‘spectacularity’ in the stadiums. Among these is a mini action camera, aimed at the referee; virtual screens instead of spectators; and new graphic additions and statistics — all in search of greater involvement of the spectator from home.

“The official document issued by the Football League indicates the process of television production step by step in this ‘new normal’ and even the access routes to the stadiums are specified in order to let the players enter by different routes from those used by the workers.

“Everything is differentiated with a precise protocol. For example, for the evening games, the previous day of preparation is no longer scheduled: for the games that are played at 20.30 the television crew does not arrive the day before, as happened in the past, but on the morning of the match itself.

“Then all the shots that would require an excessive closeness between players and interviewers and crew, or co-presence in a closed place (like in the changing rooms), are cancelled. This is equivalent to eliminating all possible direct interaction between players and TV operators, as seen in the pre and post game,” said Pintabona.

“The bigger the vehicle, the more suitable it is: that is, no one is going in the direction of using smaller vehicles” — Ivan Pintabona

Among the confirmed official news we can mention is the presence of a health official in charge of evaluating the answers given to specific questionnaires. All operators arriving at the event must complete this questionnaire which seeks to identify any contacts with people who have or have had fever or obvious symptoms. Depending on the answers, the official assesses whether or not this person can receive an entry pass and therefore enter the production process.

Certainly, the health of people was and is the priority, and not the television product itself. The main idea is the search for the right compromise to re-start the halted football championship as fast as possible, with the least possible risk.