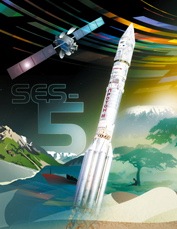 The launch of the much delayed SES-5 satellite will now take place on 10 July at the Baikonur Cosmodrome in Kazakhstan. Launch operator ILS has informed SES of the new timing for the launch of the craft, which will be located at the 5 degrees East neighbourhood.

Manufactured by Space Systems/Loral and carrying 36 Ku-band transponders and 24 C-band transponders, SES-5 will cover Europe, Africa, and the Middle East with two Ku-band beams tailored for DTH services, one serving customers in the Nordic and Baltic countries and the other serving sub-Saharan Africa.

The satellite was due for launch in June 2012 but was postponed for technical reasons related to the Proton launch vehicle. ILS engineers at the launch site had received an out-of-tolerance telemetry reading on a first-stage subsystem during preflight testing, and, from additional preflight testing performed on 19 June , it was determined that further investigation was necessary, requiring the launch vehicle be returned to the processing hall for additional testing.