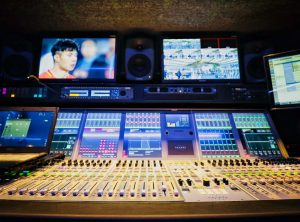 Calrec console technology inside the SMT HD9 outside broadcast vehicle

Shanghai Media Tech (SMT) recently outfitted its HD9 OB van and Electronic Field Production (EFP) system with a Calrec Artemis Shine and Artemis Light audio console, respectively. Both the van and EFP system will be used for the 2018 Asian Games in Indonesia and the 2022 Winter Olympic Games in Beijing, China.

YuanYue, supervisor of the technical department at SMT, commented: “We’re increasingly expanding our capabilities for 3D/4K capture and production, visual creativity and product development — as evidenced by our newly upgraded OB van, which is one of the first IP-based A/V broadcast systems in China. For this, we needed a console with rich IP protocol and interface support like the Artemis Shine. And for our EFP system, we needed a console natively designed to have a main and a sidecar surface, and the Artemis Light was the ideal fit.”

Prior to the purchase, SMT already had some experience with the Artemis console. YuHai, chief engineer of the audio department, said it left a great impression with its user-friendly interface and its iPad app, as well as with its immersive monitoring function. Reviewing the market more closely, SMT made its decision on the Artemis when it became aware of the console’s enormous routing and processing capabilities and that it integrates flawlessly with other vendors’ IP products.

“We’re so delighted that Shanghai Media Tech is using our Artemis consoles for two very prominent sports events. This project with them underscores the true benefits of the Artemis product line, which includes impressive routing and processing capacity along with a modular design that lets the I/O boxes be easily swapped out during a production. It’s this type of versatile combination that we want to continually offer our customers,” said Dave Letson, VP of sales for Calrec.