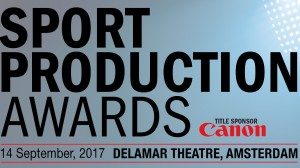 Ahead of this week’s Sport Production Awards – which are sponsored by Canon and will take place at the DeLaMar theatre in Amsterdam on 14 September, immediately the Sport Production Summit – here is a reminder of thie shortlisted entries.

Nominations were sought in three categories – Outstanding Digital, Technical and Live Event Achievement – with a fourth Award, Outstanding Contribution to the European Sports Production Community being a non-voting category.

“We would sincerely like to thank every broadcaster, production company, sports federation and vendor that took the time to submit an entry for our 2017 Awards,” said SVG Europe Executive Editor Fergal Ringrose. “We were delighted with the quality of the responses, right across the categories: a total of 24 entries were received for these Awards. We would also like to thank those many members of our European Advisory Board who took the time to cast their votes.”

OUTSTANDING DIGITAL ACHIEVEMENT: The Outstanding Digital Achievement award is presented to the best European production or innovation that was distributed via digital distribution methods which include OTT, an app, VR, and social media platforms. Nominees will be evaluated on the level of innovation and quality of production.

OUTSTANDING TECHNICAL ACHIEVEMENT: The Outstanding Technical Achievement award is presented for a specific technical achievement within a larger European production. Some examples include a new use of augmented reality, a new camera system, a new approach to live event audio. The award is not for the technology itself but rather its use within an event in a positive and meaningful way.

OUTSTANDING CONTRIBUTION TO THE EUROPEAN SPORTS PRODUCTION COMMUNITY (not open to general nominations): This SVG Europe award is presented to an individual who has changed the nature of sports content creation and distribution within Europe. Criteria includes their longevity within the industry, the impact their professional career has had on the entire sports production community, and their commitment to moving the industry forward in a positive way.