Show and go: How FreeSports’ Rugby League Back Chat is staying on air during the COVID-19 lockdown 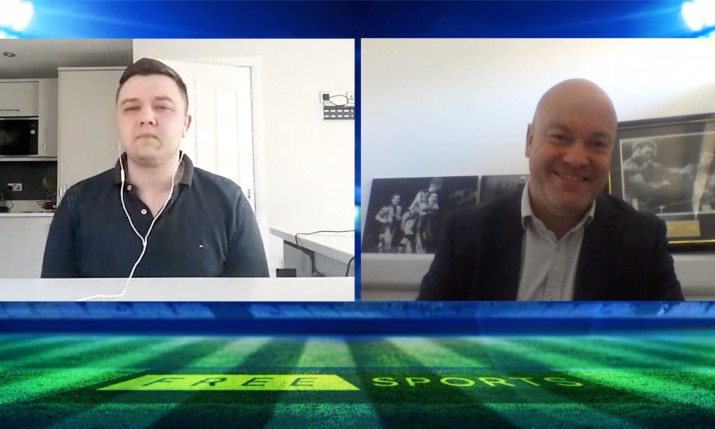 OXyFire Media Creative’s Jay Rozanski explains how technology from Telestream and Blackmagic Design is helping him to remotely produce from home a rugby league programme that is, in normal times, a studio-based chatshow.

Rugby League Back Chat is a 30 x 60-minutes series produced by PHA Broadcast for FreeSports, part of Premier Sports.

The topical quick turnaround chatshow covers the Super League and Australia’s National Rugby League, discussing all aspects of the game in a fashion that, according to the producers, “pulls no punches.”

Of course, when the COVID-19 lockdown and social distancing rules came into effect in the UK in March, the show could no longer be produced from a studio with multiple guests sat side-by-side. So a different approach was required to keep the commission on the air.

“It was never going to be broadcast quality sound or pictures. But we wanted to get a show on air to discuss what was going on and how it was affecting rugby league.”

Back Chat is directed and edited by Jay Rozanski of oXyFire Media Creative, the Sheffield-based live streaming and video production company.

Like many television production companies, not just those working in sport, he took advantage of internet and IP-based technology and mobile phones in order to produce the show remotely.

As a result, the first episode of Back Chat after lockdown saw presenter Matt Shaw front the show from his kitchen while interviewing various rugby league contributors – including Leigh Centurions owner Derek Beaumont and Leeds Rhinos player Luke Gale – from their homes.

The workflow for the post-produced show that made that possible saw mobile phone video calls fed into a Telestream Wirecast on an Apple iMac via the Rendezvous plugin. 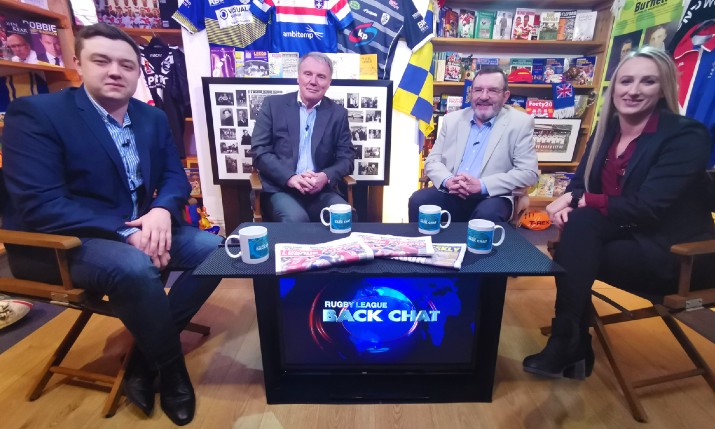 Rugby Leage Back Chat in its pre-COVID-19 format, with guests sitting closely together in a studio set-up

Two Blackmagic Design UltraStudio Mini Monitors and two Hyperdeck Studios were also part of the workflow, with the interviews edited in Adobe Premiere. All the remote sources were recorded in isolation before being cut together and played out ‘as live’.

A Blackmagic Design SmartView 4K was used for monitoring the feeds while an XR18 Digital Mixer from Behringer sweetened the sound.

It will come as no surprise to anyone who has been making shows remotely using the internet for contribution and distribution that connectivity has been one of the big challenges in keeping Back Chat in production.

“It was never going to be broadcast quality sound or pictures,” acknowledges Rozanski speaking to SVG Europe from his home in the North of England from where the programme is being produced.

“But we wanted to get a show on air to discuss what was going on and how it was affecting rugby league.”

Wirecast was chosen for the job because it is a system that Rozanski is familiar with, giving them some “control” in order to make it “feel like a Back Chat show.”

With contributors in different places, unreliable internet connections and interviews being recorded one-to-one, however, the big challenge creatively “was not being able to have a conversation or debate [as they would in the studio],” he adds.

The Speedify mobile VPN was used to bond wifi and mobile signals in order to maintain the integrity of the feeds. For future episodes, however, Rozanski will use a Quicklink Skype TX to route calls into his portable production system, potentially allowing for more debate.

“We want to also show something positive and give viewers and fans something to look forward to. You can’t talk about [the impact of the coronavirus] endlessly.”

From a directing perspective, he says it was “different but similar” to what would happen on an ordinary show. Presenters and guests were still briefed – but they were done so remotely.

“The additional things we had to do mainly involved checking contributors hardware,” he notes, adding that despite the challenges, he is “very grateful” to the show’s sponsor TotalRL.com, who have been “supportive in helping us to move forward.”

The hope is to keep the show on air this way until the end of lockdown and the resumption of the rugby league season.

There is only a finite timeframe for this, however, concludes Rozanski. If the lockdown goes on too long, the show will have to take a break.

“There is no value in going over COVID-19 again and again,” he says.

“We want to also show something positive and give viewers and fans something to look forward to. You can’t talk about [the impact of the coronavirus] endlessly. It’s not good for people’s mental health.”