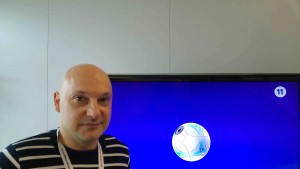 Christophe Anrys: “I think the [cloud] technology makes sense when you build a facility from scratch”

Skynet iMotion Activities (SiA) knows all about live sports production and transmission. The Brussels-based company, which is part of the Proximus group (the new name for state-owned telco Belgacom), provides live production and transmission of Belgian football matches to Proximus TV subscribers but also to a number of international clients. Proximus TV is an IPTV platform which was initially launched in 2005 and offering a number of premium channels, including different football packages at prices varying from Euro 9.95 to 14.95 per month.

«We have exclusive rights to the Belgian second division matches and we share rights of the first division with other subscription-based platforms. But we also handle the international signal for the Division 1 matches,» Christophe Anrys, SiA solutions and applications manager, described.

On championship days, the company must be ready to handle production and transmission of eight football matches simultaneously, in both Dutch and French, the country’s two languages. «Our company employs around 50 people but on championship days, we can work with up to 100 freelancers,» he said.

In addition to the packaging of the football matches (essentially logo production, with some additional graphics thrown in) and transmission of the Division 1 matches to London-based Deluxe Media — which delivers the content to international clients — the company also produces its own football programme, for Proximus’ premium 24-hour football channel 11.

The channel also shows the Belgian women’s football matches as well as the Under 19 year-old championship. In addition to the Belgian championships, Proximus has exclusive rights in Belgium to the UK Champions League and the Portuguese championship, both of which are aired on channel 11+.

«Pubcaster RTBF has the rights for the Red Devil matches, but apart from that, Proximus’s football offering is pretty comprehensive. In my view, that’s what attracts our subscribers, even more than films,» he stated, although the IPTV platforms’ total number of subscribers is not revealed.

Because it does not have the rights to broadcast any of Belgium’s national team matches, Proximus won’t be showing any of the Euro 2016 games, which are to be aired on RTBF. In addition to the football channel, Proximus also provides a premium 24-hour movie channel, MS, and a VOD option, which can be combined in a Euro 9.95 package. There is also a 24-hour promo reel channel called Zoom.

The company relies on two different service providers for all the on-site set up and OB. «We work with Outside Broadcast, a Belgian service provider which now belongs to US-based NEP, or VideoHouse, which is part of the Euromedia group, for all the OB truck and camera infrastructure on the matches,» Anrys said.

SiA bets on technology to facilitate upgrade to IP

SiA, which just acquired a couple of Kahuna 9600 switchers from Snell Advanced Media (SAM), is looking at IP technology very closely and, according to Anrys, will most probably make the switch over to IP in the next five years. «There are still a number of hindrances, for instance we are waiting for things to become a little less foggy on the standards front. But it would make a lot of sense for us, it would enable us to make big savings and use much less cable. That’s why we purchased the Kahuna switchers, because they would enable us to make the upgrade to IP when the time comes,» he explained. The switchers are used together with SAM’s Maverick control pannel.

The company is of course well equipped with EVS XT servers: four of them are used for playout and the other six (EVS XT3 and LSM) for studio work and transmission. The company has chosen EVS IP director for media management and EVS Clean Edit for football highlights. «It enables us to edit while recording,» Anrys said. Audio and mixing consoles are linked together through MADI (Multichannel Audio digital Interface), which supports up to 64 audio channels with a 48Khz frequency and 24 bits per channel resolution.

One of the company’s main drivers in the year to come will be to acquire technology that can handle the move to IP. «We are still SDI-based but anything we will purchase from now on must have IP connections, inputs and outputs to ease the move to IP when we decide to take the jump. We are looking at acquiring a hybrid matrix (control panel ) for instance, which can handle both IP and SDI,» he said.

4K, on the other hand, is not on the cards for the foreseeable future. «I don’t see a huge appetite for UHD in Belgium. It’s too expensive, even for the Belgian championship matches and the benefits for viewers are not entirely clear. There is very little 4K content out there, even if a number of people in Belgium have already bought 4K TV sets. Having said that, I believe sport, and football in particular, will drive the adoption of the technology, so it might come faster than I expect,» he admitted.

Cloud technology is also being looked at but the company has strong reservations. «As things stand the move would be too expensive for us, even if it would probably enable us to save time and money in the long run. I think the technology makes sense when you build a facility from scratch but there are too many issues when you have to integrate it in a pre-existing structure such as ours,» he indicated.

According to Anrys, the company has no immediate plans to expand its sports coverage or portfolio of sport channels. On the contrary, the company used to broadcast Belgian League 1 basketball but stopped showing the sport in 2015. «The audience figures were disappointing,» he admitted.