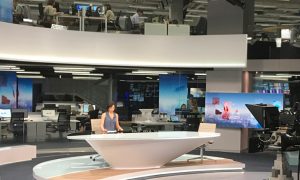 As a result of this upgrade, SIC now boasts what is considered to be Europe’s largest ST2110 facility to date, with data streams travelling several kilometres. After only four months of installation, SIC’s production teams enjoy the major boost ST2110 and ST2022-7 have brought to their activities.

“We studied what the industry was offering and what would be right for us in terms of technological platforms. We were especially interested in what Lawo, Sony and Cisco proposed,” explained José Lopes, SIC’s director for operations and technologies. 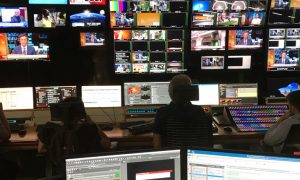 “In SIC’s setup, Lawo provides the processing power, Sony supplied its Live System Manager vision mixers and cameras, and Cisco took care of the spine/leaf network infrastructure,” stated Carlos Ladeira, TV systems and equipment integrator with SIC. He added: “The reason to choose V__matrix was mostly related to the flexibility, which no other contender was able to match.”

VSM, Lawo’s overarching, brand-agnostic control system provides extensive control over both IP-native and SDI devices. In addition, “ST2022-7 network redundancy, together with the control systems we have here, like VSM, definitely make our life a lot easier,” added Miguel Inácio, SIC’s coordinator of infrastructure management. “We can use a production set up in one of our production control rooms and completely reconfigure it for the next program within seconds. In May, we covered Portugal’s EU election. For the first time in our history, change-overs no longer required physically repatching a bunch of cables—with VSM, all went a lot faster.”

Ladeira continued: “We have a 24 hours news channel with a dedicated studio and production control room running almost around the clock. We have not had the slightest issue, so I guess this is a good proof of stability.”

Besides the fact that SIC’s operation has been running smoothly since 27 January 2019, the various SIC teams involved in this IP project are proud of delivering the project two months earlier than originally scheduled: SIC’s new installation went on air on 27 January 2019.