Simon Fell, most recently director of Technology & Innovation at the EBU, has joined the Digital Television Group (DTG) as its independent chair.

Fell, whose career across IT, online and broadcast media, telecoms and airport technology spans five decades takes over from Dr David Docherty OBE, who steps down after 10 years in the post. 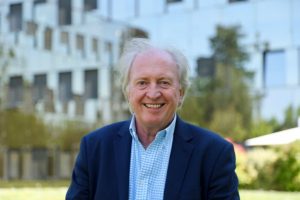 Before joining the EBU in 2013 he was CTO at Heathrow Airport where he managed the technical architecture department and introduced an innovation team. He has held several executive positions at UK broadcasters including ITV where he was director of Future Technologies.

“I am thrilled to be joining the DTG at this crucially important time for our industry,” said Fell, a fellow of SMPTE, RTS and RSA, and a frequent speaker at international conferences.

“Having worked closely with the DTG since its inception I am fully aware of the unique and vital role it plays in achieving industry collaboration. I believe that by working together our industry can be better prepared for the change that technology and international competition is bringing to media companies globally.”

“Simon brings extensive board-level experience and an international perspective to the post of DTG Chair,” said Richard Lindsay-Davies, DTG CEO. “I relish the opportunity to work closely with him on the next phase of the DTG’s development.”

Dr David Docherty steered the DTG through a decade of profound change which included the UK’s digital TV switchover, the launch of HD and UHD services, the coexistence of mobile data services with digital terrestrial television, the rise of internet-distributed programming and on-demand consumption, and industry preparations for 5G.

“I’ve thoroughly enjoyed my time as DTG Chair and wish Simon every success in the role,” said Docherty.