“It makes sense for us to have a varied size of fleet,” explains Martin Ayshford, operations manager, outside broadcast, SIS LIVE. “Whilst we do have monster triple-expanding trucks, we also have a range of medium-sized trucks that can get through the back streets of London, which is exactly what a lot of production companies want.” 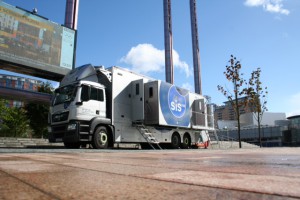 Suited for city-centre work, the OB14 can operate fully expanded or completely closed up.

OB14 has been designed primarily for use on the BBC’s Match of the Day contract on the weekends but will deliver various ad hoc OBs throughout the year, particularly in the theatre, comedy, and light-entertainment genres (hence the requirement to be able to worm through narrow London streets). A key feature of the truck is that it can operate either fully expanded or completely closed up, making it far more suited to operate in restrictive city-centre parking spaces than the larger vehicles.

Ayshford says the truck is ready for both the almost tapeless present and the definitely tapeless future, being wired for EVS XT3 XFile and XFly and ready to work at 3G (“It’s geared up for 3Gbps, though we haven’t done a 3G production yet.”). Internally, it comprises an expandable production area, adjacent to vision, engineering, VTR, and audio areas, while, technically, it can support up to 12 HD multi-format cameras (plus additional radio cameras) and records onto three EVS and three HDCAM units (the tape decks being a requirement more for LE than for sports).

“It’s actually crammed full of as much technology as we can get into it,” says Ayshford.

Probably its most immediately arresting feature is outside it and on the roof: OB 14 mounts an integrated iDirect satellite dish capable of providing Internet connectivity throughout Europe. This offers broadcasters ADSL access to upload and download file-based or streamed data, as well as access to e-mail and the Internet in general. Ayshford reckons comms will be its initial main workload, obviating the need for ISDN lines, but, with a speed up to 5 Mbps download and 2 Mbps upload, there is plenty more that can be thrown at it in the future. Interest in remote-production workflows is not confined to the sports arena after all.

For now, the truck has already had its first couple of outings, making its Match of the Day debut at Old Trafford at the end of August.