SIS LIVE, Sunset+Vine rise to the challenge of the Anniversary Games 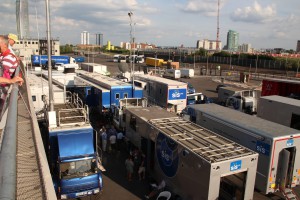 Since the London 2012 Olympics and Paralympics the UK government, sporting bodies the media have been discussing ‘the legacy‘ of the events. Success in subsequent tournaments and ongoing redevelopment of the Olympic Park in east London have been part of this, but the most obvious inheritence has been the Anniversary Games, different aspects of which were broadcast live by the BBC and Channel 4 over the weekend of 26-28 July.

With much of the international broadcast centre (IBC) now converted into studios for BT Sport, the TV coverage was centred on OB trucks and satellite uplink vehicles supplied by SIS LIVE, which had been part of the London 2012 operation. The overall event was covered by the company’s OB3 unit, which was also used to produce outputs for international broadcasters. Another HD vehicle, Unit 12, provided transmission for domestic broadcasters, the BBC and C4, as well as covering the field events. SIS LIVE also provided facilities to Swedish broadcaster SETV4.

BBC Sport produced broadcasts of the Diamond League Athletics tournament on Friday 26 July and Saturday 27 July, with Sunset+Vine overseeing production of the International Para Challenge for C4 on Sunday 28 July. Transmissions for both were uplinked from the SIS 56 dual antenna truck. The main and back-up signals were sent to SIS LIVE’s teleport and master control room at MediaCityUK in Salford. These were then relayed to BT Tower in London, where they could be selected by participating broadcasters.

Cameras for the track events were positioned around the stadium, including the finish line, where two super slo-mo systems were positioned. Operators on a buggy used hand held cameras, while a remote controlled camera on a horizontal track followed the action. High and wide cameras were installed for shots of the stadium and crowds.

Super slo-mos gave head-on views of the long jump, triple jump and javelin. RF cameras were used for presentation and interviews in different parts of the venue. HD mini-cams were positioned by SIS LIVE’s special cameras department to give close-up shots of any false starts in the track events and foot faults on the long and triple jumps and javelin. Similar views were given of the bars for the pole vault and high jump. RF feeds from the stadium and the Heliteli went through the Link 22 terrestrial links vehicle and for distribution to the scanners over fibre.

SIS LIVE’s mid-size scanner, OB14, was dedicated to SETV4 for its specific coverage. This included shots from a camera with a 72:1 lens, used in the stadium to focus on Swedish competitors. Also provided was a camera and interview facility in the ‘mixed zone’ and a commentary position with ‘Comm Cam’. OB14 was equipped with EVS and Digibeta machines and received feeds from OB3 and Unit 12, including the international signal, Integrated Field A, Field B, the throws main camera, and another giving a low angle of the throw events, in which Swedish athletics usually do well.

In all 33 cameras were used around the Olympic Stadium for the Diamond League event, with different feeds going back to OB3 and Unit 12. Fewer cameras were employed for the International Para Challenge.