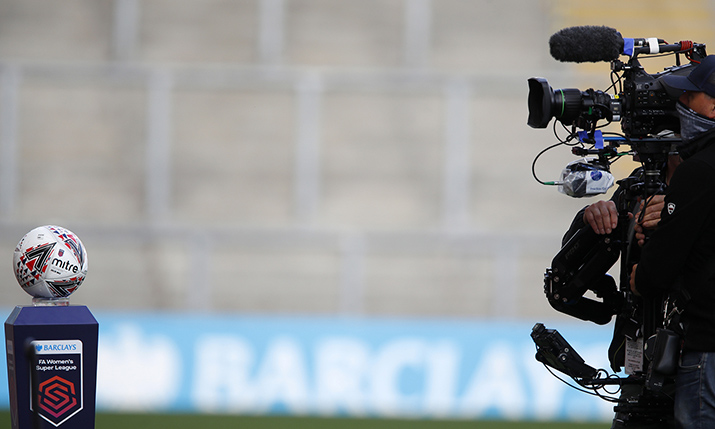 Sky Sports and the BBC will show live coverage of the Women’s Super League (WSL) in the UK from next season after the FA secured its first standalone commercial broadcast deal for the top tier of women’s football.

The three-year contract will see Sky Sports show at least 35 games exclusively live per season with the BBC broadcasting 22 live matches on free-to-air TV, with a minimum of 18 shown on their main BBC1 or BBC2 channels.

Any remaining matches not selected for broadcast by the BBC or Sky will be shown live on the FA Player streaming service.

The deal marks the first time that the rights to the WSL have been sold separately from the men’s game, with clubs in the league receiving a proportion of the revenue. Part of the income will also be distributed to clubs in the FA Women’s Championship to aid their development.

The agreements with both broadcasters will run until the summer of 2024.

“We are delighted that Sky Sports and the BBC have made a commitment to broadcast more live women’s football than we have ever seen before, while signifying its true value.”

Kelly Simmons, FA director of the women’s professional game believes the agreement is a “game-changing agreement that will transform the WSL.”

“Visibility and investment are such key factors in growing any women’s sport,” she said. “And we are delighted that Sky Sports and the BBC have made a commitment to broadcast more live women’s football than we have ever seen before, while signifying its true value.”

Sky is committing to throwing a large resource as the coverage. It said it will now begin a recruitment process for “the best in class on and off-screen production team” as part of a plan to align the WSL with the broadcaster’s other big sporting leagues and events.

The WSL will get the “full Sky Sports treatment” it added, with lengthy build-ups and reaction to all live matches, plus daily news from the competition across Sky Sports News and Sky Sports digital platforms.

Rob Webster managing director, Sky Sports said: “Our goal is to bring our customers more of what they love, and we are certain the WSL will be a success with our football-hungry viewers.

“We look forward to working with The FA and building a close partnership that helps grow the women’s game now and for future generations.”

Barbara Slater, director of BBC Sport, said: “This is fantastic news for sports fans and for women’s football. We are delighted to offer the FA Women’s Super League a free-to-air platform to ensure the sport, and the players, connect with the widest possible audience.”

Slots for the live coverage are still being discussed but it is expected that matches will be scheduled so that kick-offs do not clash directly with men’s Premier League or EFL Championship games.

Although no financial details have been revealed, The Guardian newspaper reports that the deal is worth approximately £8m per season.

The current rights deal for the WSL is with the BBC and BT Sport, with 22 live matches per season for each. The corporation shows its matches on the ‘red button’ interactive service.