The last time the Champions League Final was in Germany it was Sky Deutschland that found itself in the role of host broadcaster and Alessandro Reitano, Sky Deutschland, director, sports production, was at the centre of all the action. This year it is up to ZDF to play host at Berlin’s Olympic Stadium for Saturday’s big match between Barcelona and Juventus, and Reitano and the team of 70 from Sky Deutschland will put their efforts into a new approach to studio operations, the FreeD replay system, and 4K broadcasts of the Final. 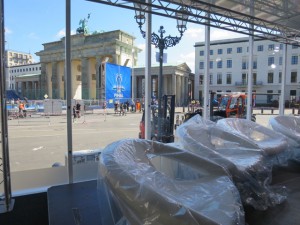 A look from inside the new portable Sky Deutschland Studio shows just how great of a view it affords of Brandenburg Gate in Berlin.

“With FreeD and UHD we can offer some clear differentiation,” says Reitano of the need to give viewers an alternative to the ZDF host production that will be available to German viewers via over-the-air broadcasts.

Along with Free D and UHD there is a new concept in studio operations that Sky Deutschland viewers get to see everyday at 18:30 when a Champions League Final pre-game show is broadcast from the studio set overlooking the Brandenburg Gate.

The studio set-up is based around a motorhome trailer that has been rebuilt so that one of the expanding walls is a glass wall, giving the set a real sense of presence at an event. There is also a roof top terrace for standup reports and a separate area that is open to the public and can be used for marketing. Perhaps most important is that it can be set up in one day. 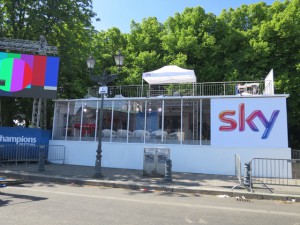 The new portable studio is a reconfigured motor home chassis.

The flexibility of the environment couple with Sky’s owning the truck means it will become a bit part not only of Sky broadcasts from other sports like beach volleyball and golf but also for marketing road shows as it can be used to promote next-generation services like UHD and more.

TopVision’s RT1 production unit is on hand to cut the six-camera studio show as well as a four-camera shoot of match on Friday that will played about 40 metres away from the studio set and will feature past professional footballers competing on a mini pitch.

“We will also be using TopVision on site as we have worked closely with them on Champions League for the whole season,” adds Reitano.

TopVision facilities were used by Sky Deutschland last Saturday for a UHD production of the Bundesliga DFB Cup Final and UEFA will produce the Champions League Final in UHD on Saturday out of that same vehicle. 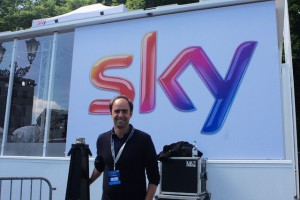 Alessandro Reitano in front of the Sky Deutschland studio.

“It was really excellent as it was the first time we had 11 UHD cameras and no up-conversion from HD so it was a really proper UHD match,” says Reitano of the UHD production. “We also had four new Sony HDC4300 cameras and very nice prototype lenses from Canon and Fujinon.”

The new Sony cameras solve one of the big problems for football production: making shallow depth-of-field issues in UHD a thing of the past.

“We were very happy and we had a sports-bar concept with 13 sports bars in Germany using Samsung UHD screens to offer a live showcase,” explains Reitano. “We had only good feedback from the bars and media.”

The big lesson for Reitano is that there is a noticeable difference between a native UHD camera and an upconverted HD signal. The signal left the stadium via 12 GB paths and was then compressed down to 35 Mbps for delivery to the bars.

“When we switched between the upconverted Spidercam camera and the native UHD cameras there was a good amount of differentiation between the two, even after getting compressed to 35 Mbps,” he adds.

This Saturday UEFA will take over the production but Sky Deutschland will once again deliver it to the 13 bars across the country.

For the actual match coverage look for the FreeD replay system to play a big part after it was used six times during last Saturday’s match. The system required 32 cameras to be installed in the roof of the stadium spaced at approximately 12 degrees apart. The end result is the ability to show replays and then freeze the action and rotate around the play from any angle.

“It took four weeks to set up and calibrate but the result is really awesome,” says Reitano. “We also have six 5K cameras in the system so we can zoom in.”