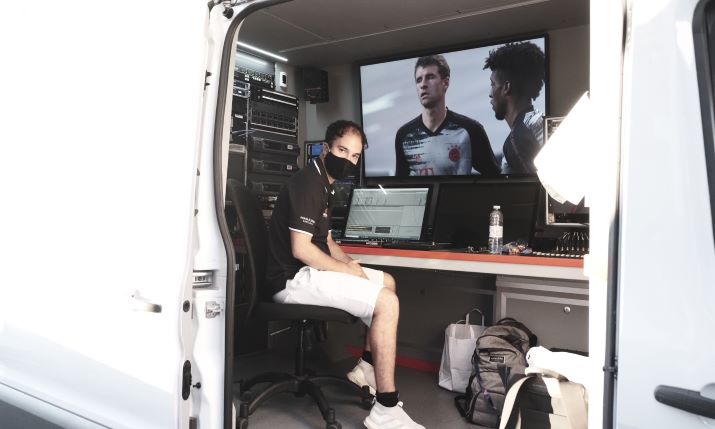 Sky Germany’s Johannes Demmel is a senior manager for outside field operations at UEFA Champions League matches. When lockdown began, Demmel, like many others working in sports broadcasting, was confronted with a break of almost five months, “not being able to enter a stadium; not even preparing any outside production at all”.

After long weeks of guessing and uncertainty regarding the restart of the season, in July UEFA informed Sky Germany about its host broadcasting obligation for the Champions League match with FC Bayern Munich versus Chelsea FC on 8 August.

Pulling the project together

Said Demmel: “Finally, we had a project looking forward to. With the experience of the return of the German Bundesliga, we already had an idea of the new circumstances in the stadium, of the hygienic protocol and access restrictions. Furthermore, we also knew that no public were allowed in the stands.

“However, the cooperation [required between] all involved parties – FC Bayern, the OB van supplier, UEFA and its partners – was [also challenging] in the short preparation time [we had available],” he said.

Demmel went on: “[In the face of] this new situation, we had to question every established workflow, maintain social distancing in the OB van, [create] zoning in the stadium, [decide on] camera positions, [add] acrylic screens [in the] commentary position and in the OB van, plus [put] hand sanitizer stations in the TV compound. [We also added] temperature checks, [the need to wear] a mask, and a personalised admission control questionnaire at the entrance to the stadium.” 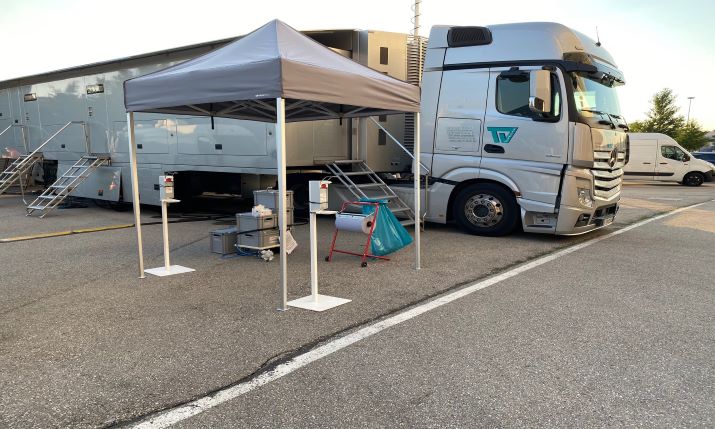 Matchday arrived and with it, a mixture of excitement and apprehension for the team on location. Said Demmel: “Walking into the TV compound on matchday was a strange feeling and it was present at all times during the day. I always felt privileged being in the stadium, but this impression is even stronger now for matches behind closed doors.”

Sky Germany’s world feed director for the game, Carsten Cassing, added: “It was a strange but also good feeling to be back in the stadium five months after the date the match was previously scheduled for. But still I had mixed feelings waking up on matchday and on the way to the stadium.”

Cassing went on: “The way of working for me personally and with colleagues has not changed too much and is professional as always. Some camera positions had to be adjusted but the way we are working with camera and EVS operators basically is the same as before.

“After the successful restart, I also believe that the implementation of remote concepts will get more importance in future,” Cassing continued. “We are using a remote control for the low camera at the halfway line between the benches in order to guarantee social distancing.”

Jörn Tietgen is a freelance floor manager, covering the commentary position for Sky Germany at the Bayern Munich versus Chelsea game. He described his matchday experience: “It seems that everything has changed in the stadium compared to the situation before. Being a freelancer I’m very happy to be able to work again. The experience of the break taught me being happy about having the opportunity to work.

“The job itself has not become more difficult now; maybe [it is] even easier as the stadium is very quiet and referring to communication, everybody enjoys the new silence,” Tietgen added. “Indeed, even though many matches without the public have been played already, as soon as the match starts I realise the new atmosphere in the stadium and I remember myself how privileged I am.” 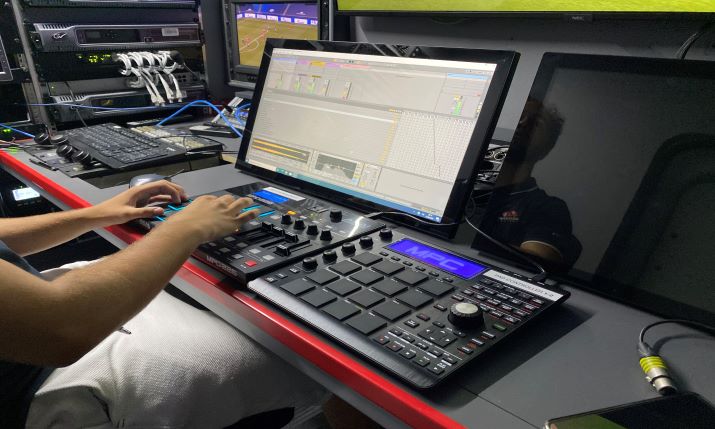 Commented Andre Kolouschek, who, alongside his team, has been responsible for implementing the stadium atmosphere with enhanced audio on the world feed: “As soon as the decision was made that matches will be played behind closed doors, we knew we would have to react.

“It is interesting to see that there was this big chance in this crisis,” continued Kolouschek. “In order to give the audience a feeling of normality, we decided, among other things, to create an artificial stadium atmosphere for the games and to make it sound as if the stadiums were crowded with fans.

“We worked out how this could be implemented and in the end we found a good and practicable way that also delivers a very good result. From now on, we were busy every day creating an individual soundbed for every football game that sounds as realistic as possible and let the audience forget that there are no fans in the stadium. I am grateful for this opportunity,” Kolouschek added.

With the final eight matches being held behind closed doors, this audio concept was offered to UEFA and implemented as an end-to-end service. Working closely with UEFA, Sky Germany sent two colleagues, Lino Ballof and Louis Vogler, to Lisbon, Portugal, to realise the enhanced audio for the world feed.

Vogler was part of the crew working in the Estadio José Alvalade, while Ballof took over for the matches at Estadio da Luz, which also included the UEFA Champions League Final.

The simplified on-site set up comprised of two samplers connected to a consumer-level laptop, along with hours of prepared samples to hand. 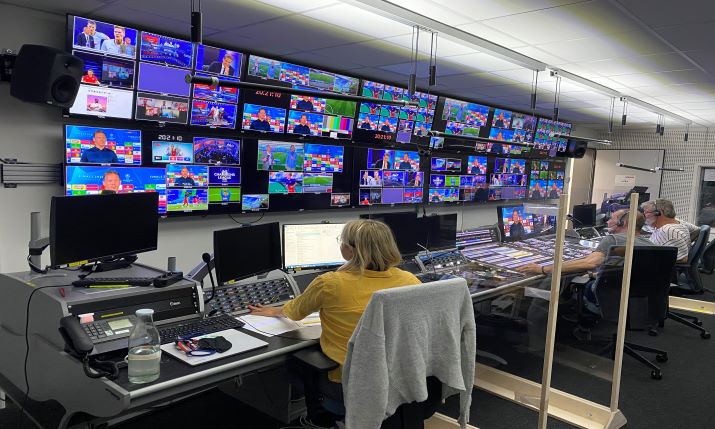 Meanwhile, productions carried out in Sky Deutschland’s Munich studio have also changed drastically. Johanna Torchetti, Sky Deutschland manager for field operations football, explained: “Looking back, we had our last on-site productions in March. Most of the staff has not been to the stadium since then, a new situation for me as a production manager. However, I was able to adjust well to the situation and there was a lot to do in the broadcasting centre. The most important thing was, of course, to keep our staff but safe.”

The new in-studio normal includes a ‘Super Hygiene Concept’ – the so-called ‘Playbook’ – masks and temperature checks upon entering the building, and meetings either virtually, outside when the weather permits, or in a large studio to allow everyone to socially distance. Moving around the building involved following a one-way system, and Plexiglass partitions in smaller VCRs and PCRs and have meant the rearrangement of regular seating, again to allow for suitable space between crew.

Continued Torchetti: “Nevertheless, of course we feel lucky to be able to get into the office and work. Moreover, some of the job descriptions have changed. For instance, production managers are helping out during production days by supervising our hygiene concept, and operators are now generating the unique version of stadium atmosphere for our second sound option.” 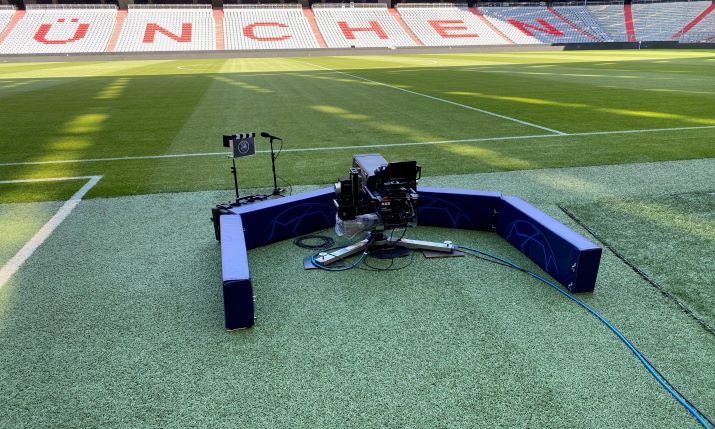 Added Miriam Müller, a Sky Germany  rundown operator, “it feels good to be back and to finally finish the UEFA Champions League Season”. She went on: “It feels like the first leg of this match was years ago, although it was only in March.”

Müller continued: “Since it is a special tournament, it is also exciting to work on it, because it has never happened like this before. Of course, all these hygiene measurements are a little bit exhausting; for example, most of the crew is not sitting in the same gallery anymore. This means we have to pay attention to explain what we plan to do in even more detail. It is so much more communication via headsets.”

Concluded Torchetti: “All in all, one can say that in this [unusual] situation, many new techniques have been established, including Skype or Zoom calls with pundits and fans to generate more engagement. What was previously impossible [at the start of this return to live football in Germany] is now used on a daily basis.”

She added: “Finally, in this difficult time, we have moved closer together as a big team. The same as our German fellows of FC Bayern, we could not be prouder after these busy weeks!”

Both Torchetti and Demmel are already in preparations for the upcoming season which awaits the Sky Germany team in a few weeks’ time. Their next challenge is to re-evaluate all measures in place to keep crew safe, reassessing ways to produce the football programme under the pressure of new and ever-changing circumstances.