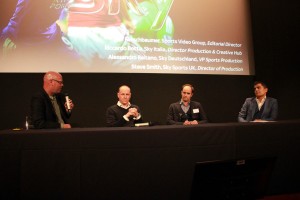 Their discussion provided real insight into the differing UHD approaches and market conditions across the three Sky territories (UK & Republic of Ireland, Germany & Austria, and Italy). Sky was not first UHD mover in the UK – that was achieved by BT Sport in 2015 – while it is first mover in the German market; differing introduction strategies have been taken in those markets.

Across all three territories, the painful experience of 3D has also loomed large in terms of parallel production, making commitments to programming rather than channels and the dangers of simply moving too quickly into new services without production, operational, delivery – and most importantly, consumer – understanding and acceptance. 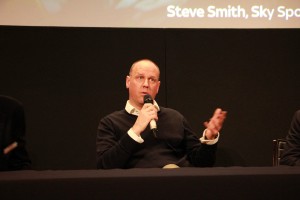 Steve Smith: “The key is putting the customer at the centre of the strategy”

Describing the August introduction of UHD programming at Sky UK, Steve Smith said it was “the launch of Sky Q that was always going to be the platform for the launch of our UHD content across sports, entertainment, movies and drama. That’s where we are, in terms of simplicity from a customer point of view. It’s a premium product.

“As regards the technology side,” said Smith, “we had to consider what our customers wanted. This is why we made a decision that we would not launch our UHD sports offering until (a) we had an integrated solution doing one production in UHD and HD, where the quality of HD would be as good if not better than the current HD quality, and (b) from a customer perspective it needed to be simple and clear — which is why we chose to launch our UHD sports offering with, in effect, all Premier League games live.

“From a sports perspective, we’ve chosen not go down the [new] channel route,” said Smith. “If you have a silver Sky Q box, a banner will come up when you tune into an event to say if the event is available in UHD. You also get the opportunity to access UHD via the red button. Or, within the sports EPG, there is access to UHD there as well. So, three different routes to access the UHD feed on the Sky Q box — two of which are prompted when you switch the game on, the other through the EPG.

“The key is putting the customer at the centre of the strategy,” said Smith. “What will resonate with the customer? What will drive them to consume in UHD and keep coming back?”

Market preparation for UHD in Germany

“We now have Sky Plus Pro, which is a kind of next generation box,” said Alessandro Reitano. “The box is Ultra HD ready. We launched an Ultra HD channel on October 5, and this Friday [October 14] we will have our first live sports coverage. It is an occasional channel, not a 24/7 channel, where we open the feeds when we have live sports coverage, and we use the box for video on demand services. 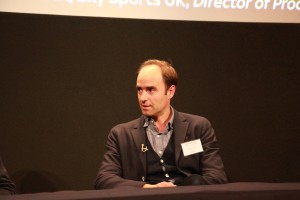 Alessandro Reitano: “The public and private broadcasters are looking into Ultra HD, but we are first mover”

“We’ve been testing UHD since 2012,” said Reitano. “This is different to our approach to 3D, where in my opinion we launched too fast, without experience of the user experience and how they would come to accept 3D – especially in live sports. We have taken the opposite approach with Ultra HD. In 3D we provided a different cut of the game to the main broadcast cut, and this was not accepted by viewers. We feel we’re now a step ahead with our UHD approach.

“We are in the good position in that we are on our own in Germany,” he said. “The public and private broadcasters are looking into Ultra HD, but we are first mover.

“This has also been the challenge for us, to prepare a market that is not totally convinced. We are not in the same position as Sky UK and Sky Italia as we are not the host broadcaster for the Bundesliga matches. Yes we are in the lucky position that we’re showing 612 matches, but we’re not producing those matches.

“You have to start to convince the [football] federation and the OB market that it’s time for Ultra HD.” he said. “It’s the same with UEFA: yes we are host broadcaster on Champions League, but only for 12 matches. So preparing the market, and making the players confident that this is something new that should be invested in, has been really tough.

“That’s why we are in the lucky position that we convinced them to produce in simulcast, not in parallel. Producing in parallel kills the whole budget – it kills everything. We had to work very hard to convince everyone to believe in Ultra HD and to invest in UHD,” said Reitano.

HDR to be trigger for UHD launch in Italy

“In Italy, Ultra HD is probably lagging behind,” according to Riccardo Botta. “Many Sky competitors in the market are still completing their HD proposition. Some of them did some experiments on air in 4K for Champions League Final and for EURO 2016.

“But for us there is no proper [domestic] competition in Ultra HD, so we have decided to wait until HDR comes out and then we will launch with HDR,” he said. “This is the way we’re going to market UHD, as we want to show a really different customer experience. HDR is very superior in terms of quality of vision. We want to provide the best viewer experience without any intermediate steps.

“In the Italian market, due to early Digital Terrestrial Television penetration with first generation 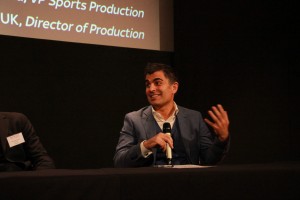 Riccardo Botta: “We have decided to wait until HDR comes out and then we will launch with HDR”

STBs, the whole market has still to get the full HD experience. For our customers, we decided [earlier this year] to launch Super HD, where we encode in a higher bit rate on the satellite and then we get the signal from the OBs at a higher bit rate. In other words we increase the bit rate both when we receive the feed, and when we compress it for the final satellite distribution. This provides a superior user experience to HD you can have on DTT,” said Botta.

“Overall, the quality of Super HD – while still HD – is better than normal HD. So we are offering it as a better consumer experience. We now have a Super HD match every Saturday night and Sunday night – and that’s enough for the market perception. We want to give the customers UHD when it will be a significant improvement to their viewing.

“The Italian OB market invested probably ten years ago, for the transition from SD to HD,” he said. “Now it is difficult to find a business case for them on UHD, because we cannot guarantee any long term commitment or service that will pay them back for a number of [UHD] trucks. It’s a chicken and egg problem. It may be that [when we start UHD] we will need OBs from elsewhere in Europe to come over to provide the production, as there will be almost no UHD trucks in Italy.