Sky Sports News operations in the UK, Germany, and Italy continue to move closer to working as one unit, sharing not only technical resources but also on-air talent and more. Executives from Sky Sports News operations at all three channels took to the stage to share the recent advances during the Sky Insights Day, held last week at Sky UK in association with SVG Europe.

The new unified efforts among the Sky Sports channels has been the result of years of talk as all involved realised that they were doubling or even tripling up. So now the three channels talk on a weekly basis to decide how to cover an event in terms of personnel and equipment. 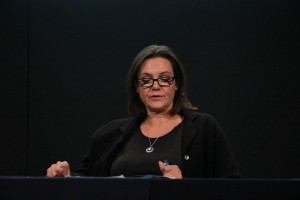 Helen Kemp: “It was the start of a new way of thinking about how to work together”

“We needed one event to concentrate on how we could work as one and it was the draw for the Euros in Paris last December,” said Helen Kemp, Sky Sports UK, Resources and Facilities Manager. “The cooperation went very well and it was the start of a new way of thinking about how to work together.”

Dominik Boehner, Sky Sports News Deutschland, Director Intake and Output, said the three channels were able to divide and conquer in terms of covering the teams involved in the draw. The UK focused on the four teams from the UK and Ireland, Sky Deutschland focused on Germany and Austria, and Sky Italia zeroed in on the Italian team.

“As a news channel we need to be flexible and we wanted content quickly so we had 20 reporters, two trucks, and six [cellular] backpacks,” explained Boehner. And now the reporters and presenters are learning different languages in order to better integrate with the different channels.

The three networks each are relying more and more on cellular backpacks for backhauling live reports from the field. Sky Sports UK has 15, Sky Deutschland has five, and Sky Italia has two. “But we can use any of the backpacks to get material from one channel to the next with a switch at the Master Control Room,” explained Kemp.

The use of mobile backpacks doesn’t mean traditional SNG vehicles are being put to pasture. In fact, last year Sky Sports invested in its own SNG fleet with five dedicated SNG vehicles, including a 4×4 vehicle located in Scotland to get to just about anywhere.

“It’s a huge and exciting time in our department as the trucks are simple to use and much smaller and quicker to deploy,” added Kemp. “A single operator and a cameraman can roll out the cable and if there are any problems with the truck the staff at the MCR can access it remotely and solve issues.”

Boehner added that the speed of setting up a Ranger unit came in handy during the Euros draw as flooding on the Seine allowed for the unit to be moved and cabled very quickly. “The Italians were the first on air and all it took was the press of a button to get going,” said Boehner. 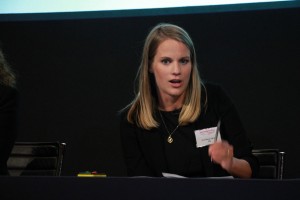 Anni-Maria Sahala: “We could do three simultaneous feeds using the three cameras”

The FIFA election of the new president was another event where the three channels worked well together as Anni-Maria Sahala, Sky Sports News UK, International and Syndication, says that only one live SNG unit and three reporters and cameras were required. “Switzerland can be an expensive place to operate so we saw huge financial benefits by not having each channel send their own trucks and cameras,” said Sahala. “And editorially it worked out as we could do three simultaneous feeds using the three cameras.” 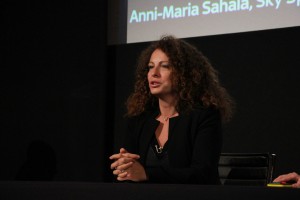 Valentina Fass: “Getting the same technology [at all three channels] is the next challenge”

Valentini Fass, Sky Sports News Italia, Journalist, added that another advantage is each of the channels has deeper contacts with teams and athletes in their respective nations. “Getting the same technology [at all three channels] is the next challenge,” she added. “We can exchange material very quickly now and things have improved a lot, so going forward we just need to take away some of the remaining barriers.”