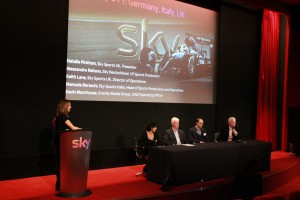 Since the three constituent parts of Sky in Germany, Italy and the UK came together as part of Sky Europe two years ago, the broadcasters have been looking for synergies that would enable them to save money and work more effectively. In sport, the obvious place to start was Formula 1, which all three broadcast. At the Sky Insights Day they revealed how the new combined operation has worked in its first season.

When Sky Sports UK started with F1 in 2012, it wanted to keep its operation simple, rigging fly-away packs into locally sourced Portakabins. But what was available differed for each race, and rigging/de-rigging took a lot of time. When the three countries combined, they thought there might be a better way of doing things.

“We all had distinct operations,” but “we came up with a solution that worked for everyone,” said Keith Lane, director of operations, Sky Sports UK.

The challenge was in fitting all the equipment into air-freightable pods that fold out into facilities big enough to operate in, and allowing the three countries to retain their own ways of working while combining to produce more than the sum of their parts.

All of the feeds coming in from Formula 1 (including on-board cameras), plus radio links from all of Sky’s cameras, arrive at the MCR pod (for storage on its 500TB server), for distribution to the three customised galleries. Working together “triples our capacity to get good stuff from the drivers, and that’s so valuable,” commented Sky Sports’ presenter, Ted Kravitz. One country might have stronger links with an F1 team than the others (such as Sky Italia with Ferrari), and that interview is then available to the other two. “It’s been fantastic for the content of our production.”

Many of the technical graphics that Sky UK uses come from Sky Italia. “It’s such a great resource that we’ve got all these three companies working together,” said Kravitz.

“When we started discussing this with Sky it was about how we can do it as cheaply as possible, with as little weight as possible, for this new contract,” explained Kevin Moorhouse, Gravity Media Group, Chief Operating Officer – facility provider for Sky in Formula 1.

“We went to Smiths of Great Bentley and said: ‘We now want to build a production gallery on a footprint that is 2m x 3m, but we want it to be 6m x 6m.’ They looked at us as if we were crazy, but they managed to build these pods. The whole thing has been designed so that we can get these things put out and set up really quickly,” he said. 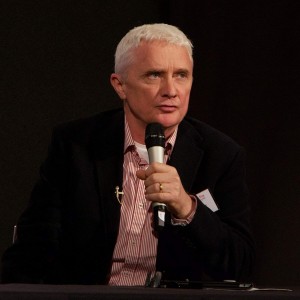 “When we first started doing Formula One it would take us two-and-a-half to three days to set the facility up. We’re doing it now in one-and-a-half days. We used to run out 20 cables. We now run out four 24-way fibres. All the pods are connected by fibre.” The de-rigs are now being done in just three hours.

“Our technical team for all three clients is about the same size as when we did it for Sky [UK].” Gravity does employ some more people, but on the production side (such as more cameramen, EVS operators). Overall, there was a large reduction in the numbers of people needed.

“We can create more output for the editorial teams, and this is key,” said Alessandro Reitano, VP Sports Production, Sky Deutschland – which has been broadcasting F1 for about 15/16 years.

He admitted that it was sometimes difficult to convince editorial teams to work more closely together and share more. “But, they realised very quickly that there were more benefits than risks. It has worked really well, and we have had no crises so far.”

One of the biggest bonuses for Sky Deutschland is that now they have catering (which they hadn’t before), and this has helped a lot in building the teamwork between the countries as they meet there and can discuss what they can share. 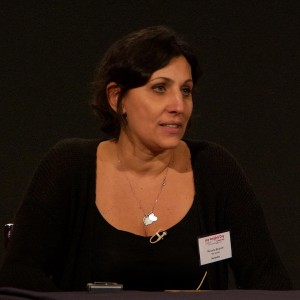 Manuela Baraschi: “Now the product of each country is surely better than last season”

and human facilities,” said Manuela Baraschi, head of sports production and operations, Sky Sports Italia. “But after the first races we understand that we work for the same target, to produce the best product.” For example, Sky Italia has benefited from being able to use the Sky Pad for analysis. “Now the product of each country is surely better than last season.”

Sky Italia is about to enter the last season of its current rights contract, but hopes to renew it. It also works with RAI, which broadcasts every race (but only ten live).

The biggest benefit Reitano sees is getting access to more driver interviews through the other broadcasters. “The output is very successful, and we’re doing stuff on air which we never did [before], so the editorial people are very happy.” Language hasn’t been a barrier, as F1 is such an international sport, all the crew spoke English anyway.

As a Sky Sports presenter one of the concerns for moderator Natalie Pinkham was: “‘Are we going to turn around and find we don’t have a camera; was it going to go to somebody else?’ and we felt very proud of our content, if we got an exclusive with Louis [Hamilton], why did we want to share it.” But, she has found that working with Sky Italia, for example, opens up relationships with Ferrari, and gives everyone broader coverage. “There haven’t been any of the problems we foresaw. It’s worked very well.”

Massive challenge for the RF guys

“As a business you look across all three companies and look to see where there are opportunities to bring things together,” said Lane. In sport, Formula One was the only one where there was an immediate opportunity to take three sets of costs and to significantly reduce them. “The challenge was to say ‘how can we bring it together and make it as good as it was, if not better’,” he added.

One particular challenge, which Gravity had to address, was how to be able to take an RF camera the length of a pit lane, through a garage, and into the paddock, without any break up, “which was a massive challenge for the guys in the RF team,” but was achieved, and benefitted all three countries.

Sky UK had originally developed Sky Pad for F1, and was able to enhance it so that Sky Italia or Sky Deutschland could switch it to their own language with a single press on the screen. “It is seamlessly put together by the operators of the relevant countries to make sure the assets are there, and they’ve got an insight into content they hadn’t had before,” he said.

Sky UK had decided near the end of the last F1 rights contract it had to reduce the amount of computer graphics it did on site, because it wanted to do it differently. “In fact, [the computer graphics] came back, because Italy was already doing it. They had some great assets,” said Lane. “Where we thought we’d have to compromise to make savings in our production for other choices, actually, no, we got them back.

“It’s been a natural fit for us, which has come together very well,” he added.

“The operational model works very well,” said Baraschi, but she believes that they have to go beyond just technical co-operation to make the most of it, including sharing editorial people.

Ultra HD in the pipeline

“From next season [March 2017] we are going to do a UHD service, for which FOM [Formula One Management] are going to be providing the coverage, as they do now, but we need to consider how we are going to get that signal back,” said Lane.

Tata is the group’s partner for delivering the services, “and the key thing there was to be smarter.” In the past the three countries would duplicate a lot of the cameras and the feeds they were getting from Formula 1, such as the on-board cameras. “Tata has enabled us to do things very differently,” beyond the traditional managed video service. “We wanted a great big fat pipe, and […] we now do 16 services of encoding and decoding ourselves for all three companies, including on-board cameras, the reverse vision feeds, [and] some of the courtesy feeds that we get from the relevant territories,” explained Lane.

They use Sky’s corporate network, a large part of which is reserved for video use, to back each other up. “Tata provide the three main video services, which they encode and manage for us, but they go to Italy and get passed on to Germany, and go to us, and get passed on to Germany, so we back each other up via our own network, so we’re not duplicating those services, we’re just sending them out once,” which saves costs.

With UHD in prospect, they are currently examining how best to deliver this, testing different encoders and set ups for HEVC, on the back of FOM’s own testing of UHD cameras and equipment. “We did a test of that service back [in Singapore] – it went fine. We were happy with the delivery method,” said Lane. He thinks they will also be happy with the bandwidth, although there still need to be further tests. “FOM still has a long way to go to develop their product, because it has to be HD compatible, and they’ll be going to 21 races and there will be some challenges there for them in terms of other broadcasters,” he added.

“We’re still forming our plans around what our UHD coverage will look like, and we still have some engineering and design aspects to go through, but we’re on the right track,” said Lane. They will have to look at how they edit material and share it, perhaps making use of its connectivity for doing some of this remotely, to reduce the amount (and weight) of storage needed on site. “We have more resources back at our broadcast centres to do things than we have on the road.” For that it was crucial to have the right partner, and as Tata already works with F1, “they have a scale there that we can benefit from.”

A race to improve

Although the technology and presentation is improving, the problem now is ensuring the sport is attractive enough to retain viewers, something it isn’t doing in Germany, according to Reitano: “We improve in our production and content delivery, they [FI] should improve in the event.”

“Sky as a group is a big player in FI, and the interesting challenge for us is how much influence we can have on the F1 product to actually drive change which will drive viewership, and ultimately subscribers,” added Lane.

Broadcasters pay a lot of money for the rights, “and if our viewership is going down, we’re asking ourselves ‘is that because we have not done all the right things to get the best value out of the technology and content?’ or is it the sport?” While he thinks F1 is a great sport, “and innovative in so many ways, there are parts of it where it just isn’t hitting the mark.” Admittedly, there are a lot of changes being brought in (not least of which is Liberty Media taking control of Formula 1), and they will have to consider the impact of those as they enter rights negotiations for the next contracts.

Baraschi hopes that the relationship with FOM (following Liberty Media’s takeover) will become as good as the partnership Sky Italia enjoys with Dorna covering MotoGP.

Because each broadcaster holds the rights for different periods, which are not aligned, the contract for the facilities had to be done on the basis of the longest rights holder (Sky UK). “The idea was to be able to scale up and scale down,” said Lane, but the most important thing was to bring the companies together.