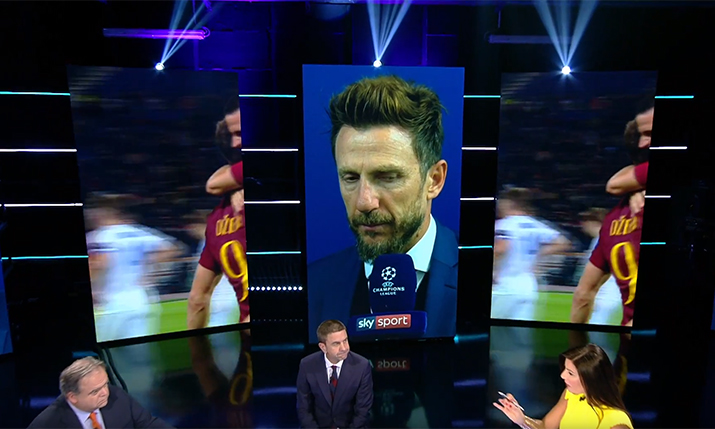 Sky Italy has chosen tools from Vizrt to change the way it orchestrates its sports studios, a move that adds new virtual and augmented reality capabilities to its armoury.

The broadcaster wanted to create a flexible studio space that could accommodate a variety of shows.

The new studio, which launched at the end of 2018, has 16 dynamic LED walls. All the content on the LED walls is controlled via Viz Multiplay. Additionally, Sky Italy has a virtual window combined with augmented reality (AR) graphics to maximise the studio and enhance storytelling.

Commented Andrea Cavaliere, Sky Italy’s Vizrt graphics lead: “We have been working Vizrt for augmented reality for many years, for 10 years in fact. We went from virtual studio to having a virtual window, where we can use graphics to come in and out of the window.”

When the studio was being built, their creative team got inspiration from how light, sound and screens are used during musical concerts and incorporated this into the studio setting. They combined this with graphics, virtual windows and AR to create something quite unique.

“We lower the lights, add some music and this makes the whole thing spectacular,” noted Roberto Montoli, sports studio director.

The studio flexibility is such that it gives the producer the ability to easily change the studio background and graphics, even within a specific programme, in order to note a change in feature, segment and to reflect storytelling.

“We are able to control five different layers of graphics inside the studio, so the potential is very wide,” added Marco Fecchio, on-air graphic developer.

All these variations are made with Vizrt’s tools: rendering engine, Viz Engine; control application, Viz Multiplay; and automation tool, Viz Mosart. Vizrt’s complete end to end solutions enables Sky Italy to control all the graphics so it can always be creative, while maintaining the distinctive Sky Italy look.

“The graphics are very important to create an identity and also instead of being just a background and a scenography part of it, it is also a main feature of the storytelling,” concluded Vincenzo Lagattolla, head of creative.

Sky Italy is embracing the possibilities of using graphics and AR in its programming. With its new studio, it is demonstrating how broadcasters can express their creativity through AR and graphics, creating their own way of storytelling.