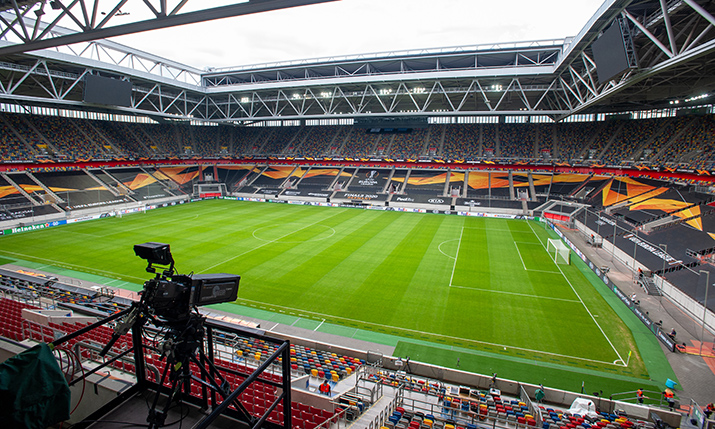 Germany’s Sky Sport used 5G mobile technology during its pre- and post-match coverage of Fortuna Düsseldorf vs VfL Osnabrück in the Bundesliga 2 on Wednesday (16 December).

Working with Vodafone, the trial at the Merkur Spiel-Arena (pictured above) saw images captured by wireless cameras or 5G mobile phones sent to a virtual studio in the cloud and then directly to viewers TV screens or smartphones, bypassing the traditional satellite contribution and distribution signal path.

Network slicing, in conjunction with Ericsson, was used to ensure stability and speed for the trial.

Both Sky and Vodafone hope the set-up will not only quicken the screen-to-screen workflow but also provide creative possibilities and the chance to try portrait-style 9:16 ratio images.

Charly Classen, executive vice president of sports at Sky Deutschland, said: “Using the first live test with 5G at a Bundesliga game, we and our partner Vodafone want to demonstrate the potential of using the new mobile technology in our sports productions. Wireless cameras offer us completely new opportunities in the stadium to get even closer to the fan.”

In a statement, Sky said that the “previous route via the Sky SNG to the broadcasting centre can be saved, which saves time. The live images could end up on our TV screen or smartphone with less delay. And because the final display of the live images is controlled from a virtual broadcasting centre, this final production of the images could in future also be carried out from the home office, for example.”

“5G transmits live images in real-time, enables the more flexible use of cameras and brings fans on TV even closer to the action”

Because the cameras and phones aren’t connected to cables, operators will be able to access places that are difficult to reach with conventional cameras, it added.

Vodafone Germany chief executive Hannes Ametsreiter believes that the trial signals the beginning of the age of real-time television.

“5G transmits live images in real-time, enables the more flexible use of cameras and brings fans on TV even closer to the action,” he said. “Even the smartphone then becomes a professional camera for every perspective.

“Together with Sky, we are now testing the image transmission via mobile communications for the first time with a live transmission in the vicinity of the 2nd Bundesliga. We have upgraded the Merkur Spiel-Arena to one of the first 5G stadiums in Germany. ”

Pictures were made available in portrait format (9:16), a format that Sky describes as being “optimised for streaming on the go with a smartphone”.

The trial in Düsseldorf only applied to pre- and post-match presentation and analysis. The live production of the game itself was the responsibility of the Deutsche Fußball Liga (DFL) subsidiary Sportcast who act as the host broadcaster for the Bundesliga.

The Merkur Spiel-Arena was one of four venues used for the finals of the UEFA Europa League in 2020.