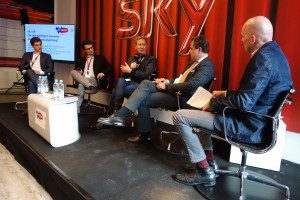 Companies don’t know yet what the business model will be for Artificial Intelligence, autonomous driving, VR and AR. “If we invest in something, we want to get the return immediately but unfortunately the industry does not work this way yet,” said Alissia Iljaitsch, co-Founder of digital innovation strategist IQ Gemini. “We need to be much more comfortable with not knowing the answer today.”

One use case for Artificial Intelligence could be to track athletes. After feeding a computer with 500 videos of rugby games, the machine can ‘watch’ a rugby game live and make a prediction about what is going to happen. “With a combination of all this technologies which are all available now, you can use this data of the athletes for scouting of the right athlete, use is to predict the performance”, explained Iljaitsch. “You can maximise the performance of the athlete by tracking his current situation and predict how many more miles can he go and include it into the game strategy.”

According to the American computer scientist Jaron Lanier who is a pioneer in the field of VR, the most important thing about technology is how it changes our behaviour. “How do we change the behaviour of our consumer?” is a key questioned cited by Iljaitsch.

“One important aspect is to have regular content that is worth watching,” says Samuel Westberg, director of sales EMEA at VR specialist LiveLike, who is convinced that virtual reality is much more than just a virtual video player. “The idea is to add up all those elements of consumption that we want for sports, third party data, editorial content… and the multiplayer functionality to be able to share that experience with somebody.” It will be possible to zoom data or editorial content, replays and all features that are essential. “From the moment a broadcaster will tackle the art of having a regular productions in VR, the market will be ready for it.”

Right now, there are eight million VR sets in the worldwide market. “You have to conceive VR not only as a player for inside a headset but also without one, which is why we have to have a 360-degree player which we call magic window. VR can be enjoyed through a smart phone or can be airplayed to have a wide angle that every sports fan dreams of (…) It is adding that sum of content inside the VR experience which makes it the perfect sports centre,” underlined Westberg. “I hope that we can start next season in Germany.”

According to Bill Browning, creative advisor at Sky Deutschland, the German market is ready for VR. “As long as the content which is delivered is good, any market is ready,” said Browning, who is also examining from the marketing point of view how Augmented Reality can play its part. “It is about giving more to potential viewers [than] what they really see.”

But the hype for VR and AR is not as big as it was with 3D. “A lot of broadcasters learned from the 3D showcase. It cost a lot of money and wasn’t sustainable,” said Marcus Beisiegel, senior manager, audio-visual rights national, DFL, which is working on VR with different tests for two years. “Together with Sky and LiveLike we had a test in November which was very interesting. From the Bundesliga rights holder point of view there is not an intermediate business case but for our broadcaster there might be one.”

For a Bundesliga game it doesn’t make sense to use 360 degree cameras in the stadium. “When you think about sports and think about what you want to see, you don’t want to see the people behind you,” says Browning. “This is why you set up 180 degree cameras to have the best position in the field and be close to the field. We have a single camera with a wide angle lens which is very easy to adopt.” Meanwhile, 360 makes sense in terms of storytelling when a camera is positioned in the hallway near the entrance so that the camera will be next to the players from Bayern Munich.

“We want to offer to our subscribers the best product from the creativity and premium quality,” said Thomas Deissenberger, managing director, Sky Media GmbH. “On the other hand, as a commercial company we have to make the most of our business.” But the habits of sponsoring TV have changed as well. “Big companies want to be more integrated and be part of the product. We should go to the huge advertisers for tests and doing something together.”

When Sky started seven years ago there was only TV while today Bundesliga can be seen on handhelds at any airport or barbecue dinner. “Now ‘live in HD’ is like saying ‘live in colour’,” said Browning, for whom VR represents added value to potential customers. “The viewer will set high expectations. That is why it is Sky’s job to jump ahead.”

Beisiegel believes that Eurosport will add additional mindset innovation to the process. “We want to make ourselves independent from the innovation efforts of our partnership,” says Beisiegel. “Eurosport and Sky are exclusive on their matches. There won’t be a competition. If there is interest from Sky to produce certain matches in VR, we certainly support it.”

In sports, the key element is being able to watch the content live – in VR as well. “People want additional piece of information in a fun way,” concludes Browning. “They won’t use augmented reality unless it gives them a game, it has to be fun and it is gotta be easy. That are three rules of AR.”

The most interesting news cases for VR are not sports broadcasting or life broadcasting, as Iljaitsch emphasises. “When we use VR and Artificial Intelligence in a smart way, we can actually get access to our brain and display our complex human reality in a virtual world. It is how we socialise in virtual worlds and is even how we are going to display data in an environment in a virtual world. With Artificial Intelligence, VR, AR symbols we can create our worlds, we can use our bodies. It is the first technology that allows us to bring our body into an experience.”

And in the field of advertising there is a stronger connection to the emotions. “This is why social VR is going to be so interesting. We are going to be able to track facial recognition, track our bodies and be somebody in VR. Artificial intelligence can be a tool that can build those interesting worlds around us in a VR space,” added Iljaitsch.