The final session at the March 22 Sky Sport Summit in Munich, held in cooperation with SVG Europe, focused on Fan Engagement and Customer Experience.

In the digital age, soccer clubs as well as broadcasters need to market their brand even stronger so that it stands out in the fragmented media world.

“We actually live from customer loyalty. When it comes to engagement it is all about experience”, said Marcello Maggioni, CCO Sky Deutschland. “Customer loyalty is about how happy the customers are.” 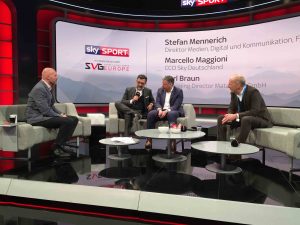 In Germany, the over-the-top service Sky ticket was launched for a younger target group which likes to see films, series and sport events not only at home on TV but also on various mobile devices. Furthermore, the introduction of Sky Q is going to offer more comfort, flexibility and program options.

“We bring back to the TV screen a lot of the positive experiences such as the flexibility, the control and, especially, bi-directional TV,” said the Sky CCO. Sky Q will also provide users with various apps, among them Netflix. In order to provide a better service for its existing 2.5 million customers, Sky has updated the set top boxes with new software that is 75 per cent faster and leads the user through a menu that is based on icons.

“Fan engagement is about approaching people personally at the right channel with the right message at the right time,” stressed Karl Braun, Managing Director, Mataracen GmbH which is working on huge CRM projects for FC Bayern Munich. Among their clients is the German Telekom. “We realised that there are so many awards given out for the best trainer, the best referee and so on but there was not any award for the fan of the year.

“Fans from all over the world in countries such as Indonesia and Brazil are submitting their videos. That proves the huge charisma of the brand FC Bavaria Munich.”

The soccer club has about 650 million fans all across the world. “Engagement is only one single step in the chain,” said Stefan Mennerich, Director Media, Digital and Communication, FC Bayern Munich. “First of all, we need to reach the people on digital platforms, through broadcast and all other media. The most direct contact is to meet them but this is only possible two weeks every year. Therefore the digitisation of the media is very important.”

After reaching out to the fans follows the engagement. The third step is to build up a relationship with the fans. “The CRM comes into the game when people register at FC Bayern Munich. If that is finally accomplished, monetisation is an issue so that the actions can be refinanced.”

FC Bayern Munich is a club that is open to the entire world. “We have editorial departments in Shanghai, New York, Cairo and are also starting an office in Indonesia. All staff members are fans that are communicating the Bavarian roots but also adopt the user habits of the particular country.” In the United States, only about forty percent of the fans have a long life relationship with their favoured club. “They have a different mentality to fans in Germany.”

Digitisation and diversification for clubs and broadcasters

For Karl Braun, the bottom line is that broadcasters and soccer clubs need to collaborate and appreciate it if there is some buzz at other channels when they are transmitting a live match. “US studies prove that every post and tweet brings up the quotas. It is all about engagement. We need to work together. Our real competitors are music concerts or basketball because they are also competing for the time of the viewers.”

FC Bayern Munich even launched its own basketball team which has become a chart leader. “It is about active people and the brand. If FC Bayern Munich is launching a project, it has a huge charisma”, emphasised the marketing expert. “If there is already a strong brand with many viewers, good quotas that is also attractive for the players, a discipline such as basketball can be build up. And, of course, it is a question of good management which applies for every company in the world.”

FC Bayern Munich Chairman recently Karl–Heinz Rummenigge declared 2018 as the year of digitisation. “We are going to expand our position in the digital world”, confirmed Mennerich. “Besides the local diversification, we also target a brand diversification because other sources such as sponsorship and merchandising depend on the success of the digitisation which creates range and revenues. That is our digital project: Digitisation and ‘medialisation’ is a key issue for a club in order to stay competitive internationally.”

Thanks to digitisation the clubs have become active in other markets. In this way, Karl Braun does see clubs and broadcasters as competitors. “Both of them are trying to extend their range and have a subscription model. By marketing sports events, he observed that the merchandising revenues are going up by factor four or five if there is a good story.

FC Bayern Munich will still produce its fan magazine. “We are going to relaunch the print edition and will also offer an ePaper.” Smart data is not a big issue yet. “We have a huge data base with million of user data that provide us with a lof of information”, said Mennerich. “The question is how it may be used to created an added value. A fan who is following us for over forty year may not want to receive a digital newsletter. First of all, we are a soccer club. Our business is to sell emotions.”

Sky is also carefully handling the data of its customers. “In the end we have a subscription business,” Marcello Maggioni concluded. “If we abuse their data to the point that they decide not to be with us any longer, we are actually not very clever.”