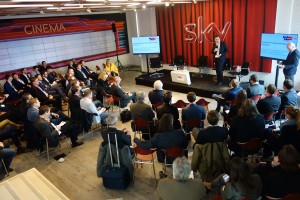 In view of the diversification of the various media distribution channels, the collection and analysis of data is of growing significance in sports production. Besides the broadcasters, online platforms and push-oriented services, the clubs and talent scouts are also benefiting from more detailled data relating to soccer players, as a session at the recent Sky Sport Summit – which took place in Munich and was organised with SVG Europe – demonstrated.

In the German soccer stadiums various methods are used to generate data. The video image and broadcast signal, microphones can be sources as well as video-based tracking systems to gather running tracks. Further options are sensor-based systems which are using RFID technology to obtain the position of the player and the ball. “The more detailled rough data we get, the more possibilities we have in terms of automation,” explains Christian Holzer, Managing Director, deltatre AG.

For the First and Second Bundesliga, a team of six up to eight scouts are collecting the data with optical tracking systems. The data is used by the broadcasters for their comments and graphics, by the clubs for a performance and video analysis, but also for goal alerts which are sent by push services to mobile phones. “This is an automated process,” says Holzer, adding that the data can be used for Augmented Reality and Virtual Reality.

Meanwhile, there are even sensor-based systems via GPS solutions. “FIFA authorised them for the playing season,” says Holzer. “The clubs can ask for permission.”

In the US the sensor technology has already been introduced. At the American Football League the position data can be gathered by sensors which are located in the shirts of the players.

“The figures help us if we can use them to tell an interesting story,” states Norman Schindler, team lead Second Bundesliga National Football, Sky Germany. But the data need to be curated. “At our top games, we have heat maps.” But the data collection also need to makes sense in terms of a cost-benefit analysis: “It only makes sense to collect data if we can monetise [it].”

At Perform Media Deutschland, a team of 25 data specialists is collecting data from about 2,000 ‘events’ during a game. “We are not only collecting data for the Bundesliga, but for 50 leagues and competitions worldwide,” explains Dirk Ifsen, Managing Director, Perform Media Deutschland. “We need to provide the broadcasters with stories and compare numbers when we mention how many goals somebody shot in the whole season. The facts need to to have a benefit for the user.”

Among the customers is Sky Germany which is receiving data for Sky Go, online and mobile as well as the club Bavaria Munich, which is using the data in the Allianz Arena, on their website, for their club TV service, the stadium magazine and social media. “In the Allianz Arena are about 1,100 screens which are featuring a forecast before the play and an analysis afterwards based on the generated data. In the B2B sector we are working with 900 media [outlets] worldwide,” says Ifsen.

Due to technological innovations there will be additional sensor data collected at the Bundesliga such as the orientation of the player, acceleration values, and heart rhythm data for the club. “We are going to collect more data because they are becoming a key element of reporting and production,” underlines Holzer. The data of the play can be used to generate automatic texts which will be updated evey other second and therefore they get a great Google ranking so that the website will have a higher range.

Starting in July the new DFL daughter company Sportec Solutions, a joint venture by Sportcast and deltatre, will collect and edit the Bundesliga data in order to create new production opportunities in the future.

“Standardised data collection is the basis for analysis,” says Schindler. “If we can combine rough data, event data and the results and generate additional information we are moving towards Artificial Intelligence. No matter if the data are presented online, sent by some push technology on the mobile phone or if they are shown as a graphic during a live game, they need to provide the viewer with an added value. Depending on the target audience that can be very specific or general information such as the detail that a goalkeeper is running about six kilometers during a 90 minutes game!”