Sky Sport Summit Munich: The beautiful world of sports, metadata and digital transformation to the fore

While UHD and HDR are improving the image quality of broadcast production, data management can create additional value for storytelling when graphical data usage such as AR comes into the picture. The potential of metadata management is also a driver for the digital transformation, the technology and the business behind it. 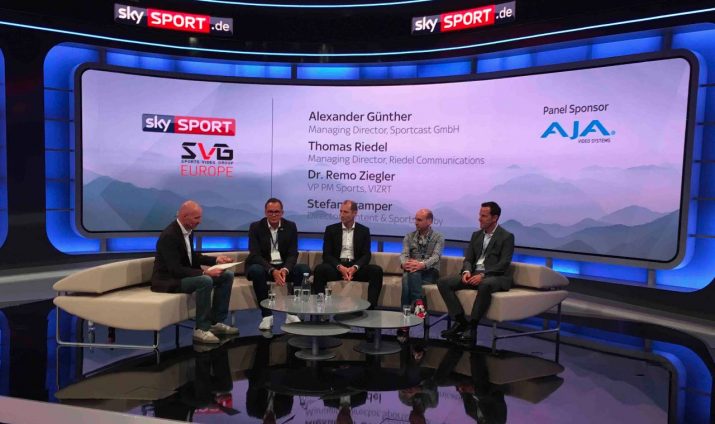 These were just some of the themes discussed at the Sky Sport Summit, in association with SVG Europe, which took place in Munich on 27 June.

In Germany, one game in the Bundesliga is produced in UHD. In Italy, the football league prefers HDR.

First of all, HDR means better contrast and more colours – but there are various HDR formats.

“We decided to go for Dolby Vision, which is a dynamic metadata model that has certain advantages for the right holders because it makes sure that the colours which were chosen in the OB van or in the grading suite will be delivered in the best possible way to the customer at home.”

“The UHD/HDR discussion is more complex than the one on SD/HD. Now, we just don’t take a step towards UHD because there is a variety that can be seen”, said Alexander Günther, managing director, Sportcast.

“The use of robotic technology is only the beginning. The media production chain can be used in many different ways.”

“As the provider of the Bundesliga signal, we are very well positioned in the national market. We are at the front of the value chain and we make sure to deliver images that look as natural as possible.”

The big challenge is to determine a standard. “Together with partners, we are testing innovative projects and new ways of production,” Günther pointed out. Therefore, Sportcast has launched the Sports Innovation exhibition in Düsseldorf that brings together different players. “There, we can set the rules.”

For example, a corner flag camera was tested at Bundesliga and the Super Cup which helps to convey emotions. “We want to create incentives that also work for other types of sport,” stressed Günther.

“The use of robotic technology is only the beginning. The media production chain can be used in many different ways.” Sportcast also holds a share in Track160. “Together with partners from data management, we need to establish an expertise for the graphical data usage and the development of AR.”

Thomas Riedel on Mission to the Moon

For Thomas Riedel, managing director, Riedel Communications, 4K resolution doesn’t need to be implemented at all costs. “If the 4K resolution can’t be recognised, it makes sense to stick to a reasonable solution, while colour fidelity is also displayed on a smart phone.”

Riedel Communications likes to push limits and solve communication technology problems, even if it comes to rocket science. One of the challenges of the Red Bull Stratos project was to send video and audio signals from the stratosphere to the earth, while dealing with the weight and energy limitations of a space capsule. “In the end, everything worked out well.”

When Thomas Riedel mentioned in an interview that he would like to be part of a moon mission, he attracted the attention of the Part Time Scientists. They approached him with the request to share his experiences in project management and technology for the Mission to the Moon project. “At the initial stage, we committed to build the Mission Control, which includes several issues that are standard in our industry. It is the same kind of communication technology that we use in the control room.”

Compared to the broadcast industry, the main difference is that the launch of the project can’t be exactly predicted because there is still a lot of research work to be done.

With several years of expertise in scientific research, Remo Ziegler, vice president Sports, Vizrt, sees innovative technologies as a possibility that can deliver information as well as emotions to the audience. “There are various tools that help to improve the storytelling. The question is how we want to use AR. Much data is tracked, measured and with AI sub-tracked out of the images.”

Instead of presenting the data as a graphic, it can be integrated in the images in a similar way to visual effects in the film industry. “We have to create additional value for the story,” said Ziegler. “In the future, there will be a stronger need to generate content for certain target groups, but we don’t want to pay more for it. For this reason, we invested in AI.”

“In terms of innovation, we are very slow,” summed up Riedel, who doesn’t blame the producers and right holders but the sports officials. “Instead of talking about resolution, we need to tackle themes such as tracking and data collection.”

As a great example he cited the America’s Cup where the sailing sport and production are intermeshed. “We can learn from other types of sport.”

User profile: As much data as possible

Samuel Westberg, chief commercial officer, LiveLike, gave an insight into the application which they provide for broadcasters and right holders. Among the biggest events covered by LiveLike was the 2018 FIFA World Cup.

”We are coming up with an Audience Engagement Platform that is for broadcasters and right holders,” said Westberg. “The idea is very simple. Broadcasters and right holders have experience with filming videos and premium sports content. On the other side are companies like Amazon and Facebook who know a lot about the user profile. And in the middle is eSports with Twitch, a video platform with social and engagement aspects.

“We want to take those two components and bring them back to the broadcasters and right holders because they need to know their audience of the future. We want to have as much data as possible and our users to be able to take the direction they want.”

Meanwhile Daniel Url, managing director, Qvest Media, pointed out that the system integrator was wondering five years ago what its business would be like if every infrastructure was cloud-based. Therefore, the company developed software for the management player Qvest Cloud which provides a connection between the cloud of different companies.

“Our orchestrator allows to integrate various third party products such as realtime graphics, vision mixers, the collecting of the encoding signals as well as the distribution on YouTube. We are taking care of the complete aggregation process.”

At the 2019 SVG Sky Sport Summit Munich, Qvest Media orchestrated Sky’s signals of the event for the live stream on YouTube. “It takes exactly three minutes to start a complete production in the cloud,” underlined Url. 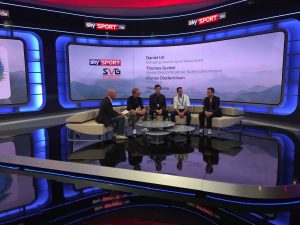 The latency of the cloud production is about 15 seconds. “We are not replacing the classic sports production. Cloud production is a good possibility for pop up channels and event channels for music concerts. In the past, it was necessary to plan that in advance and to provide an infrastructure for it.” From a technical point of view, it is even possible to operate a cloud production in HiRes but that would create unjustifiable costs.

Florian Diedrichsen, CTO, DAZN, emphasised that the classic broadcast is still the basic production workflow to deliver the signals from the stadium. “We have cameras, OB vans and signal connections that are digital. The distribution to the consumer is digital. We are streaming via Content Delivery Networks with all those advantages and disadvantages.

“An advantage is the scalability, great accessibility and device neutrality. A big disadvantage is the bandwidth of the net, which is still not sufficient for the mass audience of sports events.”

“Content is still king, but it needs to be combined with user engagement” – Florian Diedrichsen, CTO, DAZN

Cloud production is also part of the business of Skyline Communications. Once designed to control and monitor different hardware devices, nowadays the network management platform Data Miner also controls the systems in the cloud in order to increase efficiency.

“All the broadcasters have to deal with the challenge that they have to produce content for various platforms and personalised advertising while they are working with the same or even less staff,” said Thomas Gunkel, market director Broadcast, Skyline Communications. “We are automating all these processes. With Data Miner we control the complete encoding platform; collect data on how the devices are used; and we configure the video workflow from ingest to output.” In the case of Skyline Communications, even the back end is completely cloud-based.

The challenge for Thies Haase, senior vice president Metadata Management, ProSiebenSat.1, is to develop a digital strategy for the various content products of the broadcaster which includes the video on demand platform Maxdome, clips for Facebook as well as the new streaming service Joyn, which ProSiebenSat.1 and Discovery launched as a joint venture in Germany in June 2019. The free-TV platform features live streams from more than 50 broadcasters but also series, shows and previews.

“We put a focus on the development of products that are adjacent to our TV shows,” stressed Haase. “This includes the online extension of series, format Apps for single seasons as well as content for Facebook Watch, which we are using as a new content platform. Therefore, the operative handling of the content needs to be as platform-neutral as possible. We need to implement as much metadata as we can in the early stage of production.”

ProSiebenSat.1 is also considering using artificial intelligence to generate the metadata. “We have a team focusing on audio mining and video mining so that we can produce our own algorithms.” Furthermore, the broadcaster is working on a new Media Asset Management system that can manage content as well as metadata for various platforms such as Joyn and new products that are going to be developed.

“Content is still king,” concluded Diedrichsen, “but it needs to be combined with user engagement.”