The eSports universe is expanding. eSports is no longer the domain of the gamer community but attracts about 400 million fans worldwide. At the big eSports tournaments where League of Legends, Dota 2 and Counter-Strike are played in huge stadiums, players are competing for thousands, sometimes even millions of dollars. eSports viewers are mainly male, young and well-educated, making them a key target group for broadcasters as well as for sponsors.

“In Germany, eSports has an awareness level of 75%,” said Torsten Haux, VP global media rights at ESL, the founder of eSports in Germany. “We are reaching out to the millennials in the age group of 18 to 39 years.“ 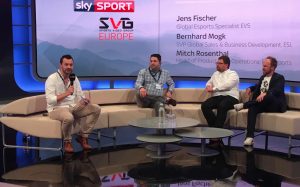 For the recent ESL One Cologne 2019, the Lanxess Arena was turned into the Cathedral of Counterstrike where world-class players competed for a prize worth US $300,000. For three days 14,000 viewers attended the event, which was broadcast in over 120 countries and could be seen by up to 20 million people. “eSports is in no way inferior to the realisation of a traditional sports production. Ice hockey, basketball and handball have an average of 5,000 viewers [in the arena],” said Haux.

An essential difference is that there is not necessarily a national team at eSports events. “In eSports the game comes first, while in traditional sports the fans can often identify with the club in their region,“ Haux pointed out. “eSports brings together the youth of the world like a big music festival. With a total of 110 million players, League of Legends is the biggest eSports title in the world.”

“eSports was literally developed as a Free To Play Game,“ said Mitch Rosenthal, head of production & operations, Riot eSports. “It definitely gives the players something to look forward to.” Riot has staged tournaments at the Bird’s Nest Arena in China as well as in Korea. “We have partners around the world and collaborate with them to bring all that technology together.”

Among the partners is EVS. “We have been working with ESL and Riot for four or five years,“ said Jens Fischer, global esports specialist at EVS. “We want to improve the storytelling, which is as complex as a soccer match with 80 players and ten balls.

“eSports is always at the cutting edge of technology,” said Fischer. “The technical infrastructure and the workflows need to be simplified.”

On the other hand, the use of AR can make sense. “The player sees the avatar only virtually. AR gives us the opportunity to let a big monster appear right next to us,” said Fischer.

”If something goes wrong, we get the feedback ten seconds later via live chat in the control room.“ Indeed, the production of an eSports event has various technical challenges. For example, the start sequence of Dota 2 in which the players choose their avatars, requires a vision mixer that supports more than 15 M/Es.

“We have hit the wall with our classical broadcast technology,“ said Fischer. eSports also means big expenditure in terms of cameras and OB vans. 80 players in a tournament translates to 80 signals from their computers alone. Furthermore, there are signals from 80 face cameras as well as other cameras.

“Basically we have two main productions,“ Haux pointed out. “On one hand, eSports is like a traditional show production with cameras, big stages and cranes. On the other hand, we need to feature the game, which requires people who understand it and can realise it comprehensively, making it visually appealing.“

Learning how to tell the story of an eSports event

When eSports started, almost all viewers were gamers. Nowadays about a third of the viewers are non-gamers who enjoy the entertainment and the atmosphere in the arena. “We are working together with broadcasters, OTT platforms and communication partners from all across the world,“ said Haux. “Therefore we need to develop an editorial way of presenting analysis, slo-mos and storytelling that has a visual value. We are still in the fledgling stage when it comes to full analysis and building up stars.”

A big benefit is the gigantic pool of hobby players. When a team lost two players for a major Dota 2 tournament, they signed a 19-year old amateur player from Finland who had never played on a big stage before. As part of the winning team that competed for $25 million prize money, the young player received $ 2.2 million. “In traditional sports it would never be possible that a club such as Real Madrid recruits an amateur player for the Champions League Final,” noted Haux.

eSports offers many options because in a game a lot of data and facts are generated. “It is very difficult to integrate the metadata. Sometimes it has to be done game by game because the games differ from each other,” said Fischer. “Some manufacturers provide the right kind of API, some don’t.”

When a partner offered EVS its metadata, the API had an output of 45,000 data points per second. “That wasn’t helpful for our editorial workflow at all.”

Meanwhile, Riot has a global league system. The fans are not focused on national leagues, they also follow up on leagues in foreign countries such as Korea. “If there is a mega clash in Los Angeles which is similar to a game that took place in Berlin a week ago, we want to show that,” emphasised the ESL representative. “We need these tools so that we can access the database, search for the material and transmit it live — connecting the American with the European league. That is exactly what the kids are doing because they are watching several leagues in parallel.”

At the 2018 World Final, Riot had 99.4 million viewers. “We have 14 leagues around the world that are playing in regular season” – Mitch Rosenthal

However eSports events in big arenas cost a lot of money. “We try to cut costs where we can and constantly reinvest back in the player,” said Rosenthal. At the 2018 World Final, Riot had 99.4 million viewers. “We have 14 leagues around the world that are playing in regular season and now sponsorship is starting.”

Riot got Mastercard on board as a sponsor. “Sponsorship is a key issue,” said Haux. “For two or three years it has been the biggest source of income besides ticket sales and licensing. Brands such as Vodafone, Mercedes Benz, DHL and Pepsi understand that they can reach the young audience in an authentic way, which is very difficult with traditional sports.”

While the Bundesliga often attracts an aging audience, eSports is a mass phenomenon that appeals to young target groups. The Danish public broadcaster TV2 is reaching a market share of 30% of its young audience groups with eSports. “eSports has more viewers than the Danish soccer league,” underlined Haux.

“We always provide the product to the player in the way they wan to [consume] it,” said Rosenthal. “We never try to push them towards TV if that is not the way they want to do it.”

Because eSports is consumed on global platforms, there are no exclusive rights. The ESL events are always broadcast in English. “That gives the local provider the chance to build up their own commentators so that the audience will switch from digital to linear,” said Haux.