Football is a multi-billion dollar business. But the TV landscape is changing. In Germany, the golden times, in which only one broadcaster held all the rights, have gone. The Federal Cartel Office fragmented the sports rights by implementing a No Single Buyer Rule for the tender of the audiovisual exploitation rights from season 2017-18 onwards.

For the first time, the DFL hit the magical one billion euro ceiling with the sale of national media rights. From Season 2017/18 up to 2020/21, the income for national media rights went up to €4.64 billion. The rights for the UEFA Champions League flushed € 3.2 billion into TEAM Marketing.

But the German football ans don‘t have a benefit. They need to access three different channels if they want to see all the Bundesliga and Champions League games in the Season 2019/20.

“We have the situation that one Bundesliga game can be exclusively seen on Eurosport only while the other matches are shown by Sky. According to the new regulation, the live transmission rights need to be divided between at least two bidders,“ Holger Blask, director audiovisual rights, DFL, told the audience at the 27 June Sky Sport Deutschland Summit in cooperation with SVE Europe.

“From our point of view it’s not necessary to implement such a regulation because it’s in our interest to conduct an open auction. We understand that the Federal Cartel Office wants to support the competition so that there will be a second player on the market. This can be reached without such regulations and, if applicable, that the viewers won‘t need various subscriptions.“

“The result of the No Single Buyer Rule is that Eurosport arrived as second provider on the market. In the case of the UEFA Champions League, the market conditions let us decide to acquire the rights together,“ added Christian Frodl, director sports rights & commercialisation, Sky Deutschland. “There are various reasons why it requires three providers for the complete bouquet.“

With the Sky Conference, the broadcaster created an editorial product that features the Bundesliga, Champions League as well as handball. “The users really appreciate these formats.“ 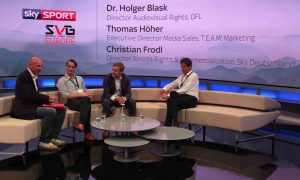 The success of the Sky Conference could inspire other bidders such as the German Telekom to build up an infrastructure, as the event presenter Gert Zimmermann added for consideration. “Everyone who is interested in these rights needs to think about how to set up the editorial organisation and production infrastructure,“ commented Frodl.

“The next season will start in two years,“ observed Blask. “The announcement of the tender will take place in fourteen to sixteen months. I assume that media enterprises will be able to take care of a corresponding exploitation since we are delivering the base signal, which is produced by Sportcast.”

In addition, there are further players entering the market. “For the past three or four years Amazon and Facebook have been acquiring rights and are doing several tests. Some of them work out, others don‘t,“ said Thomas Höher, executive director media sales, TEAM Marketing. “They are using these learnings for the new tenders but they don’t throw money around. They calculate very carefully because they have very precise objectives and won‘t just flood the market.“

Another challenge for the broadcasters is increasing piracy. “At each Bundesliga matchday we are looking for the sources and sending out warnings,“ said Blask. The written warnings are also delivered to upstream providers and social media platforms with the request to take down the streams. In addition, the cases are being prosecuted legally. “We need to raise awareness and also approach the advertisers. The illegal streams are never released altruistically but financed by pay walls or advertising,” said Blask.

Furthermore, there is an increasing demand for content delivery via OTT platforms. “This is not only the case in sports, we also see this kind of development in entertainment and fiction. It is a growth market for Netflix, Amazon but also for the Bundesliga provider in Germany,“ said Frodl. “Sky is already offering OTT services for several years and we are developing the products in line with market requirements.“

“For providers such as DAZN it is easier to develop a price structure because they start at scratch“ – Thomas Höher, TEAM Marketing

In addition to the Sky Q set top box and Sky Go, in 2016 the broadcaster launched the Sky Ticket OTT product and in Austria the follow-up product Sky X earlier this year. “While the regular customers are committed to paying the subscription fee around €30 per month, the younger target groups want to pay less,“ said Höher. “For providers such as DAZN it is easier to develop a price structure because they start at scratch.“

Therefore, Sky has to make sure that it doesn‘t cannibalise its own subscriptions. “OTT is always a business model – no matter if it offered on a daily or monthly basis,“ said Frodl. “We can‘t give premium content away too cheaply. The balance between the price volume and a good product for young audiences is difficult. We are also building up other sports, but football still remains king.”

“Even Generation Z is interested in football,“ said Blask. However, they want to have different, shorter, media formats. “Sky already invented the millennial product years ago by launching the Sky Conference,“ he said. Editorial concepts such as clip formats may apply to different kind of target groups. “We are not only acquiring rights, we are also defining what the product will look like in 2025,“ said Frodl.

Meanwhile, the tender for the UEFA Champions League will be launched in Germany in October 2019. “We will hold talks and see which kind of packages will make sense,“ concluded Höher.