Sky Sports has added its seventh channel this week, with Sky Sports 5, which is dedicated to European football. The channel launched on Tuesday with the UEFA Super Cup between Real Madrid and Sevilla, from Cardiff, where Sky was host broadcaster.

The broadcaster is also significantly increasing its coverage of football on its other channels, on the back of ratings growth of 7% last season, and through its website and mobile applications.

“We have more games than ever before,” with 116 live Premier League matches, “with more of the games that matter to fans. Every Premiere League team will be seen at least three times by the end of November,” said Gary Hughes, Sky Sports’ head of football.

There will also be 90 live games from the Sky Bet Football League, including 20 from leagues 1 and 2, and 15 from the playoffs, as well as 30 matches from Scotland and 15 games in the Capital One Cup.

Sky Sports 5 will offer “an abundance of European football,” with 129 games from the Champions’ League, more than 150 from Spain’s La Liga, the Copa del Rey, later stages of the Italian Super Cup, and more than 100 games from the Dutch Eredvise. There will also be some 250 international games this season as part of its four-year contract to cover all the European qualifiers (involving 53 nations), including every match from Ireland, Scotland, Wales and Northern Ireland (plus highlights of the England matches). The coverage will start on 7 September. 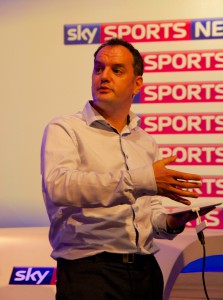 For UK fans there will also be a new, enhanced on-demand service, with every Premier League club having its own page on the catch-up service, including full repeats of live matches. “It gives the fan a real destination,” on their Sky+HD box, said Hughes.

The team sections will offer a growing library of content, interviews and documentaries featuring players and managers, historical documentaries, and club-specific clips and features from its Soccer AM and Fantasy Football Club shows.

Sky also revamped its range of digital products for tablet and mobile phone this week, and undertook a compete redesign of its skysports.com website.

Users can either watch one of the seven Sky Sports channels as a linear feed, or watch clips, whether from Sky Sports News HQ or the other channels. There is also an aggregated Twitter feed, allowing users to contact Sky Sports and to take part in polls, which will feed back into SSN HQ and help influence stories there.

It is also creating video clips of events in real time, so that viewers can keep up with other shows while watching the main game, or they can go split screen, to watch two matches at once.

For example, Sky recently signed a new contract with the US PGA, which will allow it to cover more golf events in greater depth, and the apps will allow viewers to follow their favourite European players including in-depth statistics and continuously added highlights.

Both the phone app (for iPhone and Android) and the iPad app will have a similar look and feel, and Sky Sports is also re-launching its most popular app, Score Centre, which reaches about five million unique users each month.

It carried out a survey of users, and found they wanted to be able to follow more than one team, and for the app and service to be faster, and simpler.

Therefore, Score Centre will now allow users to follow four teams with push notifications of the latest action, adding more video (with live streaming of Sky Sports 5 and the other channels on the iPhone) and many more statistics (with more than 30 data points plus individual player stats). It also has a new user interface that is easier to navigate, and has more betting integration (although users can switch that off). It should be available by the end of August, and Gibbs promised that all the apps would be updated with many more features over the next six months.

There had also been some criticism of delays with goal notifications. However, the Score Centre feed is the same as the vidiprinter on Sky Sports News, but, depending on what mobile network people are on, there have been some challenges, however Sky has “worked hard on speeding up delivery to the application,” said Gibbs.

All the digital products are free to Sky Sports subscribers, but non-subscribers can access the iPad app for £4.99 per month, including live streaming of SSN HQ (streams of other channels are subscriber only).