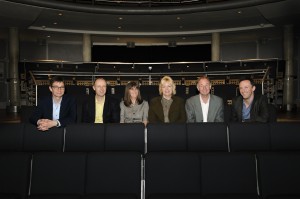 Sky Sports and BT Sport are among the UK broadcasters now using the updated technical and metadata standards for file-based delivery of TV programmes drawn up by the Digital Production Partnership (DPP).

The DPP specification, published in January 2012, has now been clarified, with new developments incorporated into it. Among these are guidance on using 4K (Ultra HD) cameras, conformity with the EBU R128 loudness standard, inclusion of Shim Version to accommodate updates, and optional audio metadata for carrying multichannel audio metadata in programme files. The necessity for providing an associated sidecar xml file has been removed.

The DPP was established in 2010 by the BBC, ITV and Channel 4 (C4) to give information and advice on best practice for digital production and data-based distribution of material. The initiative is supported by other UK broadcasters as well as Sky and BT Sport, including Channel Five, UKTV, and S4C, the Welsh-language commercial broadcaster that covers rugby in Wales as well as other sports.

Independent production companies are also signed up to the specification, which is based on the AMWA (Advanced Media Workflow Association) AS-11 standard for file-based contribution and distribution using MXF (Material eXchange Format).

Commenting on the new standards in general, Kevin Burrows (pictured second from right), technical standards chair of the DPP and controller of technical broadcast and distribution at C4, says: “Having an agreed UK standard for file-based delivery across the industry that we can build on is of great benefit in ensuring ease of exchange and the ability to incorporate future requirements.”

During the upcoming IBC in Amsterdam the DPP will be announcing “a number of major pan-industry initiatives” on Saturday 14 September, a specific meeting hosted by the organisation in the main auditorium, and Sunday 15 September, as part of the Workflow Village Event.

In the run-up to IBC the DPP announced two major changes to its Board. Mark Harrison (pictured first left), controller of production with BBC North, has taken over as chair of the organisation from Helen Stevens (pictured third from right), director of broadcast operations for ITV, while Andy Tennant (pictured first right), technology director of studios at ITV, will now oversee training collaborations. This responsibility, which includes liasing with Creative Skillset and BBC Academy, was previously supervised by Helen Stevens, who is still a DPP Board member.