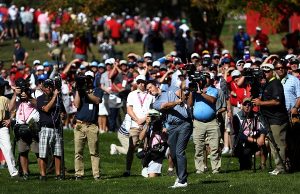 Sky Sports and golf’s European Tour have extended their UK and Ireland rights partnership until at least the end of 2022, a deal that means the next two Ryder Cups will be shown exclusively by the satellite broadcaster.

The agreement covers the Ryder Cups from Wisconsin in 2020 and Rome in 2022 plus a minimum of 35 Race to Dubai events from the European Tour. Of those, at least five UK and Irish events will be shown, including the BMW PGA Championship, the Aberdeen Standard Investments Scottish Open and the Dubai Duty Free Irish Open.

Sky Sports managing director Barney Francis said of the new agreement: “The European Tour is a hugely important part of our golf coverage – it’s a mainstay of our dedicated channel Sky Sports Golf, and it’s something we know our customers really value.”

Sky Sports is currently showing live and exclusive coverage of the Ryder Cup from Paris. It also has the rights to the British Open until 2021 and the US Open until 2019.

Sky has also extended its European Tour deal in Germany, again, including the Ryder Cup.