Sky Sports faces the Test (and ODIs, too) for complex cricket coverage 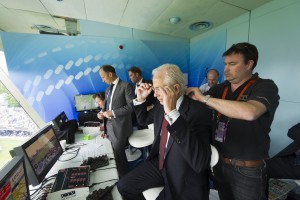 Commentator David Gower is mic’d up ready for his next session in the box (©Chris Lobina 22.05.15)

Sky Sports began its association with English cricket in 1990 when it provided the first ball by ball coverage of an overseas series involving the national test team. In January of this year, Sky Sports announced that it had extended its contract as the sole broadcaster of England cricket matches until 2019.

The agreement includes all England’s home Test, one-day and T20 matches, as well as a minimum of 60 days of domestic cricket. Sky Sports will also cover some England Lions and all women’s Ashes matches, plus the 2019 World Cup in England.

Overseeing that operation is Sky Sports’ executive producer for cricket, Bryan Henderson. “This is a job about which I am passionate. Alongside the administration of the department, I produce the coverage of a number of the games, especially the Test Matches. With the number of games we cover – almost on a daily basis – it is impossible for one person to produce every single one. In fact, the team comprises five producers.”

Henderson started with the broadcaster in 1998, becoming a producer on Sky Sports News three years later. In 2006, he joined the cricket department and was appointed to his present post in 2013.

“We have extensive interaction with the England Cricket Board (ECB) and consider it as a partnership. There are some great people at the ECB. We are all here for the good of the game – both broadcaster and governing body – to promote the sport. Having said that, it is important the broadcaster maintains editorial independence.”

That’s a point picked up by Sky’s production manager, Liz Thorne, who along with the unit manager from CTV that provides the OB facilities, shares the engineering responsibilities for The Oval match. “It is always a tricky line to walk between the crew, production and the ground. We all want the best for cricket coverage, but it can take some negotiation!” 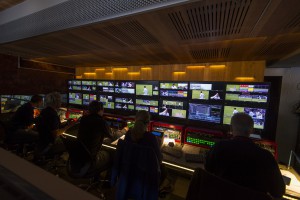 Replay: A key part of Sky’s cricket coverage is the replay of each delivery. Seven EVS machines are used in the CTV truck.
©Chris Lobina 22.05.15

Thorne says that planning started in November last year. “That involves the rostering of staff and crew, along with the negotiation of contracts and facilities. Contact with the ground is constant with pre-season recees in February time and meetings monthly on any changes that might be necessary. Actual paper planning began around a month ago. We have one 94-page planning sheet from Sky that covers the entire season, and individual sheets for each game.”

Thorne adds: “Often, though, the biggest challenge for cricket OBs is, of course, the weather.”

She continues: “We all at CTV and Sky are very dedicated to bringing the best possible viewing experience to our subscribers and are always thinking of creative and innovative ways to tell the story of the tournament. We are always looking to enhance our BAFTA and RTS award winning coverage. We use the very best production people who love the game and who know exactly what we want. Often a cameraman will stay with the same camera throughout the series because he knows exactly what the director is expecting.”

Thorne explains that all the major cricket grounds within the UK are hard-wired – meaning rig times are kept to a minimum. This is vital with so many games to be covered and with often only two days between matches and considerable distances to be travelled by the production vehicles.

Both Sky Sports and CTV work closely with the production manager and unit manager from the Sunset + Vine team, who produce the highlights programme for Channel 5. That unit uses a separate facilities company, NEP Visions, which is on site close to the CTV vehicles.

For the Ashes Test Matches, CTV provides additional facilities for Australia’s Channel 9. It takes a world feed from Sky Sports, but has its own director and commentary team for dedicated coverage for Australian viewers. 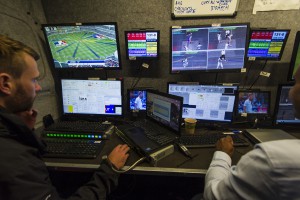 Review: Increased use of data and the analysis of all aspects of play is an important activity in coverage of today’s matches. ©Chris Lobina 22.05.15

Mark Lynch, one of Sky’s match directors, has been involved with cricket coverage for 20 years. “We use 30 cameras for ODIs, but this number may increase for the all-important Ashes series against Australia.”

The 30 included HD cameras, one wide, one tight, located in the stumps at each end of the pitch. In addition, the coverage employs six super motion and two ultra-motion, plus Hawkeye operated Fujinon ultra-motion cameras.

Unlike many other sports, Sky’s cricket directors do not carry out their own vision mixing. “Absolutely not,” emphasises Lynch. “Kim Connor is a specialist in cricket vision mixing and is at all our internationals.”

He goes on to say the biggest changes he has seen over the years involve the quality of HD, the far bigger lenses that allow extreme close ups of the players, high speed cameras like Ultra-Motion, DRS and Hawkeye. “We are continually working with Hawkeye to develop new and innovative ways of replays.”

Located close to OB unit 11, a truck jointly designed by CTV and Sky Sports and which serves as the broadcaster’s production base, are two vans used for Hawkeye and Hot Spot operators and equipment.

The ECB pays for two Hawkeye cameras to be deployed on each side of the pitch to check on run out decisions. These along, with the Hawkeye cameras on each end of the ground, take around one and a half hours to calibrate to ensure the highest degree of accuracy. When in operation, these cameras run at 340 frames per second.

In addition, four Hot Spot cameras developed by Australian company BBG Sports, and operating at between 92 and 115 frames per second, are employed to confirm whether or not a ball has hit the bat or pads.

These systems, together with the RTS (real time snicko) the audio system designed to catch the slight sound of ball hitting bat, are utilised in the Decisions Review System (DRS) now accepted for most international matches.

This year, for the first time, viewers are able to hear the conversations between the on-pitch umpires and the third official who is called to adjudge decisions referred to the DRS.

Another truck houses the graphics operation where Vizrt systems provide a variety of statistics for selection by the match director.

Located within OB11 is the replay gallery. Here each of the seven EVS operators is responsible for specific coverage cameras. Overseeing the operation is a VT co-ordinator who provides the director with selected replay angles following each delivery. The edit facility within the vehicle produces openers and closers and highlights packages.

Thorne continues: “The Sky Sports feed is also sent to a truck operated by Mediatec. This company provides the big screen coverage at the grounds, and supplements our output with a camera of its own and relevant graphics. There are tight rules as to what can or can’t be shown during the actual delivery of each ball.”

Henderson says that the biggest change he has seen involves the consumption habits of viewers. “The explosion of digital has changed the way we approach coverage. With the advent of iPhones and iPads, everyone wants to see events immediately. Our challenge in the cricket department is to ensure the coverage remains interesting for all ages so they will continue watching.”

Part of that interest comes from the delivery of relevant facts and figures. Alongside the preparation carried out by each commentator, two statisticians are located in the commentary box to provide information about players or past performances and results. The statisticians also score the game and have input to the graphics team to ensure the correct visual information accompanies facts delivered by commentators.

Henderson concludes: “The key to our success is the great team we have built around the department. On the Lord’s Ashes test, which is our biggest gig of the year, there will be about 140 people working on the programme. While it is often me, or the match producer and director who get the credit for the coverage, actually it’s a large – and talented – team that we have around us who also make the Sky Sports output the highest quality.”