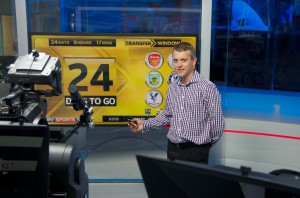 Sky Sports relaunched its news operation on Tuesday in time for the new football season, with a considerable investment in technology, the promise of more investigations, and greater use of social media. It also shifted the channel up the EPG, to 401 (the first of its sports channels), to make it the first destination for sports fans. The new Sky Sports News HQ is almost double the size of the previous studio, so that journalists are on hand to update stories more quickly.

“We’ve totally redesigned our newsroom to reflect how people are using the news,” said Karen Willmington, head of studio output, Sky Sports News. “We’ve changed the way we tell stories at different times of the day [and] we’re integrating digital media into the heart of the newsroom (they were elsewhere on the campus), so that everyone is working closer together.”

“We are adding a bit more dynamism to our stories,” with more emphasis on investigations, added Andy Cairns, executive editor, Sky Sports News.

“Social media plays such an important part in the news world, we can’t ignore it.” Indeed the social media desk is right next to the main presenters area, where the reporter can monitor what is happening on Twitter (via Tweetdeck), Vine and Instagram, on multiple monitors. “The first thing in the morning, we’re going to see what was trending overnight,” he said. This is part of a plan to make it easier for viewers to follow a sport or story on the web or mobiles, and to sort “the newsworthy from the nonsense.”

It will also be used to generate debates, setting up instant polls to find out what viewers think. “Often when there is a breaking story, we don’t have a picture, so we can go to see what’s on social media,” he said. “We curate all the best stuff [on social media] so viewers don’t have to follow everything,” added Willmington.

Rather than just have a presenter behind a desk, two mobile cameras around the newsroom will allow them to go to where the work is going on, “to see journalism in action,” she said. “People are fascinated in what is being done behind the scenes.”

Sky has also rebuilt the interview breakout studio in the reporter’s area, at the other end of the newsroom, so they can get a reporter on screen more quickly. “It was a bit of an afterthought when we first moved in here, and we didn’t make the best use of the space. We can now handle up to five people comfortably, so can do a debate or interview,” she said.

There are four fully mobile robotic cameras in the main presentation area, plus a fixed robotic in the reporter’s area, and two ceiling-mounted fixed PTZ remote cameras on either side of the main studio that can pan to cover the entire newsroom.

The most prominent new technology is the huge video wall, 8.4m across by 2.1m high, with a resolution of 6144×1536 pixels. It is made from Barco OVL-708 LED rear projection modules, which were chosen because: they had the narrowest screen gap (<0.2mm); wide colour range with self-calibration to prevent drift; were brightest in class (>1000 lumen); and promised long life and low power consumption, said Mike Ruddell, head of technology, Sky Sports. 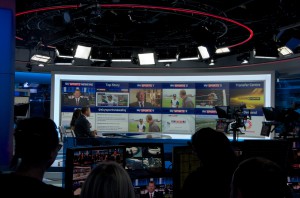 “The Chyron graphics are best for news where it’s rundown driven, but our creative guys prefer Vizrt because it has a better set of artistic tools for 3D graphics.” It can also handle the whole production chain, from creation to transmission — “it’s more of an ecosystem,” said Ruddell.

However, the Chyron systems play a large part in Sky Sports News’ look. The L shape graphic on the right and bottom of the screen “is very complex. It takes three Chyron engines, because of the complexity of the data,” some automated, the rest semi-automated (selected by an operator). “Chyron is very good at handling that sort of automated data,” he explained.

“A specific challenge of this project was getting the performance out of the Vizrt to drive the graphics on the video wall. We worked closely with Vizrt on this,” he said. “Our in-house graphics and data team developed an app to let the production team drive the graphics from a template without being a graphics designer or operator, so it’s under editorial control.”

But, while the performance of the Vizrt engine was great for HD, it suffered at the much higher resolution of the video wall (almost five times the data). Together they did a lot of optimisation, while Vizrt managed to implement a major change six months earlier than it had planned. “The amount we constantly push the suppliers relies on having good relationships,” he added. “It’s a commitment from them to push themselves, but also to be honest with us when the limits are reached — we can’t afford to be let down on high-profile projects like this.”

They have now managed to get the performance necessary to drive the video wall from a single Vizrt graphics engine, “with a very bespoke configuration.” Of course, the launch of the service is only the start. “Sky Sports is extremely ambitious. The system has the performance to do what we want to do initially, but someone will have a great idea and increase demands, so we are not going to stand still on development,” said Ruddell.

“If I only went to IBC or NAB and asked [manufacturers] what they could do, I’d be six months behind the curve. I’d rather drive the development than be following it,” he added.

Touchscreen technology is becoming increasingly important to Sky, and is widely used on sports productions, notably with the Sky Cart. However, for SSN HQ Ruddell was given the challenge to have the thinnest possible bezels around the screens.

Because every part of the newsroom is part of the studio, the screens would be seen from 360º, “so infra red technology [with sensors hidden in the bezel] was not going to be the best choice. They are affected by studio lighting, which is fine if the screen is in a fixed position, but we have three Sky Pads in the newsroom, all being twisted around, and it had to work as a screen from any direction.”

To achieve a thin bezel, they decided on a capacitive screen covering, which was a custom development with Pro Display (www.prodisplay.com), which isn’t a broadcast company and had to develop a new system for news that could work 18 hours a day, 365 days a year, and would be a lot more accurate than the normal retail displays it drives — in this case these are Samsung ME screens chosen for high brightness, good colour rendition and wide range of image control options.

Sky is using Never.no as its social media aggregation platform, as it was already in the process of rolling it out for Sky Sports in general. “We’ve integrated all of the social media (Twitter, etc), and can easily pull it into the video wall. The social media producer will be tweeting and interacting with viewers and the producer of the video wall can pull it in to integrate it with the graphics,” explained Ruddell.

Sky Sports Digital Media, which is based in Leeds, is in charge of the website, “and when we started to think about how to integrate social media, etc., we looked at what they were doing and found they were driving a lot of the content we wanted.” This can now be shared with the SSN HQ social media desk, meaning that Sky Sports News doesn’t have to create it, while Sky Sports Digital Media can now get direct access to browse all the SSN HQ video and clip it for the website, making it more efficient for both teams.

They also plan to integrate the four regional SSN bureaux, so that they can move from transferring via baseband video circuits to being part of the main system. 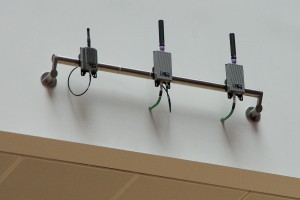 SSN HQ has two roving cameras, but with some 100 people working in the newsroom, and wanting to move the cameras around a lot, cable was out of the question. The wireless system is the first installation of the new Real Freedom range from BSI, with two antenna systems — one in the newsroom, the other in the atrium above the entrance to Sky Studios.

“It was important for us when selecting the RF system not only to maximise coverage and picture quality but to make the camera indistinguishable from a cabled camera. Both are used in the newsroom so any delay inherent to an RF system must be minimal in order to allow us to intercut cabled and RF cameras and the full range of CCU operators’ control must be available. The BSI Real Freedom System met these needs admirably,” explained Ruddell.

Indeed, “the system has surpassed our aspirations. It will cover almost all of the building,” from the atrium to the newsroom, and even out onto the roof (from where there are views of both Wembley Stadium and Twickenham’s rugby ground).

“It’s very interesting to bring a company from an OB background into confined studios. There’s a little bit of a culture clash, but it brought the best out of each.” It means cameras will be able to follow guests from coming into the building to the studio, and can even be sent to cover other members of the production team on two other floors.

One of the key things that made the implementation of SSN HQ possible was the flexible design of the Sky Studios (Harlequin) building. “If we hadn’t made studios and galleries interconnected with flexibly shared architecture, there would have been no way we could keep Sky Sports News on air for the last four months,” he said.

“We had to move production down to studio 6, and the gallery to gallery 5, while the newsroom and gallery 6 were refitted. The thought that was put into the infrastructure in the building meant that was merely a matter of routing.” The technical installation of the new newsroom took six weeks, with another two weeks, or so, for rehearsals.