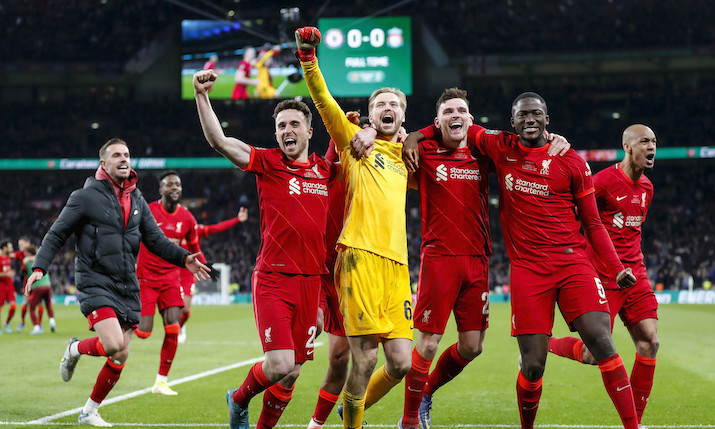 Sunday’s Carabao Cup final saw the highest in-home peak and average viewing figures on record for a League Cup Final on Sky Sports, as well as the introduction of a host of new filming technologies.

The match averaged 3.16 million viewers and peaked at over 4 million – the highest in-home peak for any match since Liverpool v Man Utd in January 2021 (4.8 million). The final also saw the highest peak audience of the 21-22 football season.

For the enthralling game – in which four goals were disallowed – fans watching from home were brought even closer to the action as Sky Sports introduced new super slow-motion Spidercam and Steadicam cameras.

The super slow Spidercam – a world first in football coverage – was used to showcase key replays and montage shots. The Spidercam, which was still used at full speed for live cuts and analytical replays, was switched to super slow for replays of set-pieces and penalty kicks.  These new angles added to the drama of the 22-kick penalty shootout.

Fans also benefited from the introduction of ACS net cameras with zoom lenses, which provided great shots of penalty area incidents, including for the numerous goal mouth scrambles and near-misses. Previously filmed using fixed wide-angle lenses, the zoom lenses allow the viewer to get closer to the goalmouth action.

Another super slow-motion camera, the super slow Steadicam, was brought in predominantly for the trophy lift and celebration scenes at full time. Most of Sky Sports’ celebration shots over the years have come from the use of Steadicams on the pitch, so the ability to switch this camera to super slow mode was a way to add greater depth to the live show.

Sky Sports director of football Gary Hughes said: “It was a brilliant final and great occasion to introduce the new cameras – bringing over 4 million fans even closer to the action.”

EFL chief commercial officer Ben Wright said: “Sunday’s game was a spectacular finale to the 2021-22 Carabao Cup. The record-breaking number of people watching live on Sky Sports, alongside a sell-out Wembley Stadium demonstrates the continued popularity of the competition and its importance within the domestic game. I would like to take this opportunity to thank Sky Sports for the prominence it gave the match in its schedule, the exposure across its digital platforms and for the enhanced level of production which helped give those watching a different perspective of the dramatic penalty shoot-out.”