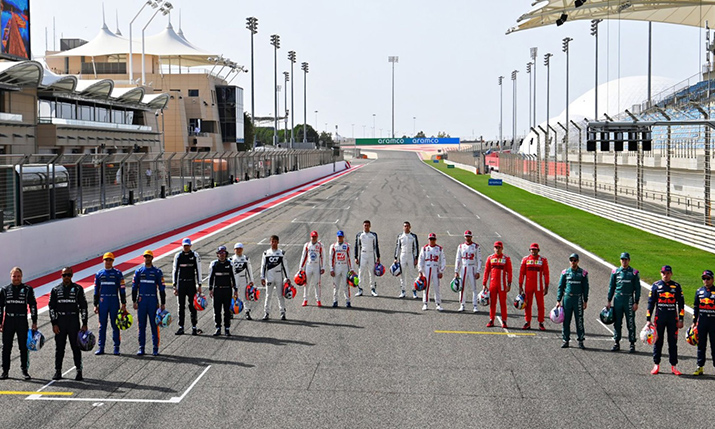 British broadcaster Sky Sports is all set for live coverage of the Formula 1 2021 season, which begins in Bahrain this weekend.

SVG Europe caught up with Sky Sports’ director of F1 Billy McGinty and Andrew Ferrans, F1 senior production manager, to talk about how they work with host broadcaster Formula One Management (FOM), the collaborative relationship on F1 coverage with other members of the Sky Group in Europe, and how they are hoping to bring new fans to the roar and thrill of F1 motorsport in 2021.

No missed tricks for fans

FOM is responsible for producing all F1 coverage for rights holding broadcasters, including Sky Sport. McGinty says: “We have a very close relationship in terms of directing them specifically on certain things, but they’re the experts on live coverage. We leave that to them, but we always debrief and we always keep the conversation going. I think that’s important.

“We allow them the space to do what they do best, and there was no better example of that than when Romain Grosjean back in December crashed into the [barrier] and his car burst into flames. So when you’ve got some real sensitivities around, when we’re relying on Formula One for the pictures and for them to tell the story and to do it in a sensitive and respectful way, they absolutely deliver, and we trust them on that. I think it’s a question of dialogue channels that are always open pre and post races, and during the races.”

“I’m going to try and get some of the wider Sky onscreen family into a race this year as elite sporting guests. What we’re trying to do is grow the audience and they can describe and convey how amazing Formula 1 is as a sport”

On capturing the story for fans, McGinty states: “I don’t think a fan watching Sky Sports F1 would miss a trick during the course of a race weekend. I think we have a great mix of an on-screen team that are experts and drill down into the car mechanics and the engineering of Formula 1 cars, but we also have a team that understands the sport of racing that can speak to [anyone] on why this is such a dramatic sport.” 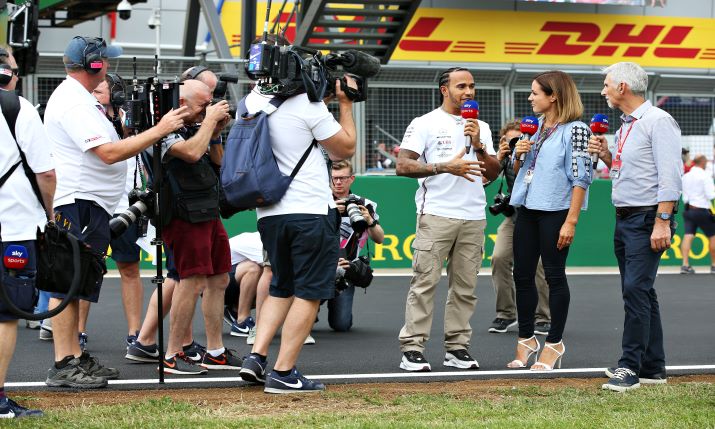 Lewis Hamilton being interviewed by Sky Sports in pre-pandemic times

However, more can be done, he adds: “I think our biggest challenge is to get that floating sports fan to love F1. On most occasions we succeed, and we try our hardest [with] a great mix of onscreen team that allow the story, the in depth technical bits, but also the drama of sport [to be told].”

In terms of innovations around Formula 1, Sky Sports approaches it from both technological and editorial perspectives, to give fans what they want. Says McGinty: “I think we try and look at how we do different kinds of interviews; we try and have fun along the way, [and also] we try and be serious. We also we have the Sky Pad, which is an open air touchscreen, which has been with us for nine years, all the way [with F1]. It’s still unique, we still continue to do it, and that just gives us the edge in terms of an analytical perspective.”

He adds that Sky Sports will be bringing pundits from other sports who are, McGinty says, “massive Formula 1 fans”, into the F1 conversation, with the aim of increasing the viewership. McGinty comments: “I’m going to try and get some of the wider Sky onscreen family into a race this year as elite sporting guests. So members of our sporting department who are onscreen in other sports, to get them as part of the team and embed them in Formula 1 teams.

“What we’re trying to do is grow the audience and they can describe and convey how amazing Formula 1 is as a sport. Micah Richards, who’s one of our football pundits, has already sat down with Lewis Hamilton for a pre-season introductory interview. The hope is he will come to a race this year.”

The Sky Sports team is very experienced in television broadcasting. It includes Martin Brundle, who’s been broadcasting since 1997, “from his ITV days and into his BBC days”, notes McGinty. “He’s the wise man of the sport; the preeminent broadcaster in the sport.

“But we also have drivers, for example Jenson Button and Nico Rosberg this year, that have just left the sport recently, so we have that mix and we have that balance and therefore we have certain people that the audience can identify with,” explains McGinty. “We also have a couple of former drivers that really have brilliant knowledge of the sport and they too play their part within the scene; they might not have had the stellar driving careers that Jensen and Nico had, but they have an incredible knowledge and are fundamental members of the team.

“What we generally look for is a team of seven or eight during the course of a race weekend; that’s commentators, reporters and on screen. Across those I don’t think we’ve got anybody who’s the same; they’re all individuals, but they come together as a collective to be a fantastic on-screen team.”

Sky Sports has bought some its new ways of working discovered during the last 12 months into its F1 coverage this year. Explains McGinty: “We’ve recorded a vMix cloud-based F1 show pre-season special with 14 contributors on it in the space of 96 minutes of editorial, a two-hour slot. We would never have dreamed of doing this last year.”

“In conventional circumstances we would have had a one-plus-three in a studio with some nice VT inserts and the odd person dialling in on Zoom or something on a big screen,” he continues. “But because we love the fact that this technology can create new opportunities for us, I think to have 13 or 14 contributors, the whole [presentation] team and some star guests on it has just created a great opportunity for us. Even though it sounds really simple, it’s different.” 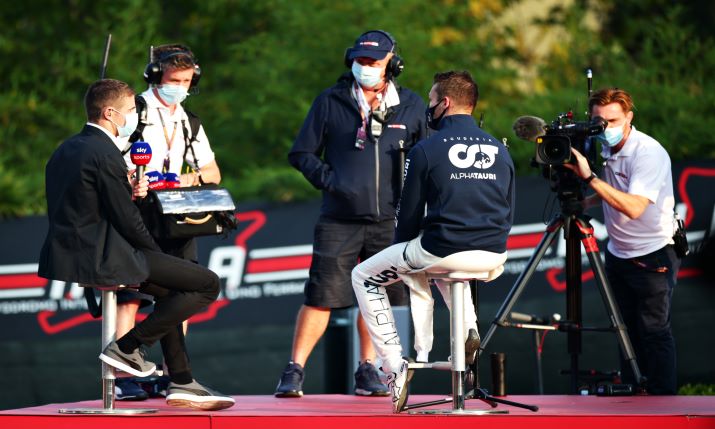 The Sky family of Sky Sports, Sky Germany and Sky Italy are all heavily involved in F1 and therefore each are present on the ground at the races. Although all operate independently to reflect their own editorial choices and cultural requirements, they also collaborate where they can.

McGinty explains: “There’s clearly a collaboration with [each] of the territories and we content share where we can. For example, Nico Rosberg will come and join us [and is shared across all three territories because] he’s fluent in Italian, German and English; it’s fabulous for the group because he’s cross-territory.”

The cross-country teams have weekly calls in the pre-season preparation for the start of F1, as well as during, to debrief and brief each other to see where it is possible to collaborate. McGinty states: “We just go through what our plans are for Bahrain, is there an opportunity for someone to piggyback a shoot, for example; if Sky Deutschland are speaking to Mick Schumacher this week, is there an opportunity to ask him a few questions in English off the back, so we can get some content as well?”

“I’ve just worked on Premier League football for the past five years and what is clear is the real close collaboration between [Sky] group on this sport, which is actually difficult as we don’t always have a vision that is exactly the same for all our programmes. What we do though is try and see the opportunities that each territory creates,” continues McGinty.

He comments on the differing editorial styles each group uses: “I can’t speak Italian, but when I watch the Italian team present, it’s clearly culturally an Italian team. You can see the colour and essence. You can tell that their presenting style is a little bit different to a UK style of broadcasting.”

Meanwhile Sky Germany has just launched a new 24/7 F1 motorsports TV channel for the start of the new F1 season, joining both Sky Sports and Sky Italy with their own F1 channels. Ferrans says the new channel means Sky Germany is stepping up its on-site presence at F1’s upcoming races.

Ferrans notes: “So they have presented back from Munich for the last 12 months. As they came back into the sport, after a couple of years away, they now will present a full on-site programme the same way as we do. They’ll have presenters, reporters, and commentators on site at the majority of events. The UK will be at all events; the Germans at the majority. They’ll still have a live programme every single week; it’s just about how they choose to utilise their resources, whether they’ll all be on site or some on site, but the main programme will come from site every week.”

McGinty concludes: “We’re going to try and market the sport and try and widen the audience group as best we can. We’ve got the Sky Pad, we’ve got the technology; we’ll do the things that will seem normal to our viewer, but probably take more effort given the [pandemic] circumstances on site. For us, I think it’s trying to keep the same level of production value, but working hard behind the scenes to make it happen.”