Having built some 37 vehicles for in-house customers over four years, Sky Vehicle Technology is now looking beyond the bounds of Sky’s European sports and news channels for new customers. It has already done its first design job for an outside client, but IBC2017 in Amsterdam was Sky Vehicle Technology’s first push for clients outside Sky.

However, according to senior engineer John Ault: “We’ve already had a lot of interest from outside companies,” mainly when the vans were on location at sports events. Of the 24 vehicles it has constructed for Sky UK and the 13 for Sky Deutschland, the vast majority have been for sports news or news, all one- or two-person units. It built the fleet of 13 for Sky Deutschland in 24 weeks, comprising seven uplink vehicles, four IP Land Rover Discoverys (primarily for sports production) and two multi-camera production tenders.

It is currently building a portable studio for Sky Sports on a 3.5-ton Sprinter-size chassis. This single-side expanding studio will be 4m x 4m x 3m (high) when open, and will be used for a new football show launching in mid October.

“The demountable studio can’t be expanded when it is on the van. It is not unusable, it’s just that the studio space is much smaller,” explained Beth Fairweather-Bloud, vehicle technology manager. 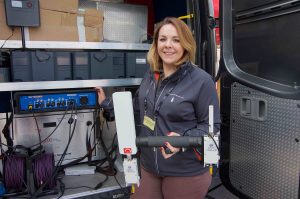 It showed a Ranger XL vehicle at IBC fitted with a Sematron RM150 1.5m DSNG antenna, which can be used with the studio. The dual-path uplink unit can support four fibre cameras and two wireless cameras – it uses custom 3D printed brackets to give 360º directional coverage around the van. It also uses Riedel’s new Bolero wireless intercom system, plus Peplink Pepwave 3G/4G cellular bonding, so it can remote control the vehicle.

It has a Bluebell Silhouette box especially designed for a Sky Deutschland project, which supplies the four fibre cameras with power, comms, bi-directional video and audio, and Gigabit Ethernet. The vehicle also has a de-riggable omni- and directional-wireless camera antenna (using Link antennae) — again using a 3D printed mount.

Sky Vehicle Technology also builds a smaller Ranger vehicle, where everything has to be installed without doing any damage to the van – as they are on three-year leases. This has resulted in a very flexible design, which makes it quick and simple to take out and replace modules needing maintenance, to ensure no downtime.

The Ranger is single-person operation, because it can be remote-controlled, and the van can be locked and left running to power the equipment while the user is shooting. The XL is a dual-person van, as it has a vision mixer and sound desk. Both offer location editing.

It is also looking at building a demountable box that can house camera racking and operators, which will plug in to a small SNG van. This will enable users to provide racked cameras without needing a huge OB truck — making it useful for remote productions.

There is also likely to be a small, non-expandable, down-the-line studio, with a dish and generator, on a 3.5-ton Sprinter, to be used as a single-seat remote interview studio (instead of putting interview studios around the UK).