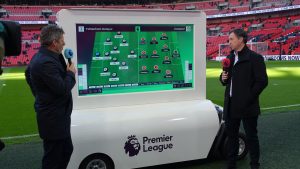 SMARTCART has announced that it supported Premier League Productions for its pitch-side presentation of the Tottenham V Liverpool game at Wembley Stadium on Sunday October 22. The company, which is owned by Gil Cowie, now looks forward to working with PLP for the rest of the 2017/2018 season.

SMARTCART SVX has become synonymous with pitch-side, track-side and golf course presentation and analysis, delivering greater fan engagement and providing the opportunity to get deeper into the live event with surprise interviews, insight, video reviews and other content with the stars of each sport.

“Our turnkey service package comes at modest cost per event compared to what it brings to the production by bringing the fans closer to the game,” Cowie tells SVG Europe. “With the rise in remote production and OTT sports coverage, SMARTCART SVX and its spinoffs comprise a great fit for the on-site ‘production hub’, whether it be as a standalone or as part of a larger production. It provides fantastic chances for cost savings across the board as well as new coverage opportunities for lower tier sports.”