SMPTE, the organisation whose standards work has supported a century of advances in entertainment technology and whose membership spans the globe, has announced that the SMPTE 2017 Annual Technical Conference & Exhibition (SMPTE 2017), held this week in Hollywood, California, drew more than 2,500 registered attendees for a landmark event. 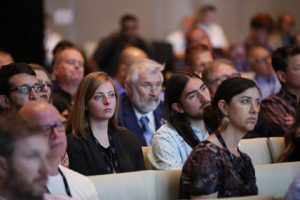 “Attendance for SMPTE 2017 was our highest in more than a decade, with guests from around the world joining us for the final instalment of the conference here at the Hollywood and Highland Centre and Loews Hollywood Hotel,” said SMPTE executive director Barbara Lange. “In fact, attendance broke the record set last year for the Society’s centenary celebration. The continued growth of our annual conference and exhibition is a strong signal of SMPTE’s vital role in enabling the future of entertainment technology.”

The day prior to the official start of SMPTE 2017 featured the SMPTE 2017 Symposium, “Artificial Intelligence (AI) and Machine Learning (ML) in Digital Media Creation: The Promise, The Reality, and The (Scary?) Future.” The daylong symposium was co-chaired by SMPTE Fellow Michelle Munson, co-founder of Aspera, and Yvonne Thomas, product manager at Arvato Systems. Subject matter experts, visionaries, and thought leaders in the field helped attendees to establish a firm foundation for understanding these technologies and their potential to disrupt the media and entertainment industry. Jeff Kember, technical director for media in the office of the CTO at Google, delivered the keynote address, discussing the latest opportunities and advances in ML, and how AI and ML are shaping the media and entertainment industry.

Also on 23 October, the Women in Technology Luncheon, presented jointly by the Hollywood Professional Association (HPA) Women in Post Committee and SMPTE, drew a record number of attendees, who were treated to a conversation with Madeline Di Nonno, executive director of the Geena Davis Institute on Gender in Media. Joined by Kari Grubin, vice president of mastering for the Walt Disney Company, Di Nonno shared the latest findings from the institute’s new ML media metrics tool, the Geena Davis Inclusion Quotient (GD-IQ), and analysis of the top family films of 2017.

The third annual SMPTE-HPA Student Film Festival took place on the evening of the 23rd at the TCL Chinese 6 Theatres. SMPTE and the HPA received 119 submissions from more than 30 countries, and the 17 official selections chosen by the jury represented Germany, Hong Kong, the UK, and the US. Eight films were revealed as winners at the conclusion of the evening, and student filmmakers received prizes courtesy of Avid, Blackmagic Design, One World Computing, and Sundog Media Toolkit. Further details on these films and filmmakers are available at www.smpte2017.org/student-film.html.

SMPTE 2017 will officially wrap this evening with the Annual Awards Gala, hosted by top Hollywood entertainment anchor Sam Rubin. Along with leadership from SMPTE and the HPA, Rubin will guide guests through the awards ceremony, recognising the evening’s honourees, while moving through Hollywood history from the 1950s to the present time. Guests are encouraged to dress in black-tie attire with a nod to Hollywood glamour through the decades.

During tonight’s celebration, SMPTE will officially bestow the Society’s highest honour, Honorary Membership, posthumously on Renville “Ren” H. McMann Jr. (1927 – 2015) by inducting him into the SMPTE Honor Roll. McMann’s many innovations include the CBS Minicam Mark VI, the first handheld color TV camera, and the magnetic scan conversion techniques used by NASA to bring color TV images from the moon to viewers around the world.

At the Annual Awards Gala, SMPTE will present the Society’s most prestigious award, the Progress Medal, to Paul E. Debevec. Debevec is being recognised for his achievements, and ongoing work in techniques for illuminating computer graphics (CG) objects based on measurement of real world illumination and their application in films such as “The Curious Case of Benjamin Button,” “District 9,” and “Avatar.” The Annual Awards Gala will recognise more than 20 additional honourees and a dozen Society members who have been elevated to SMPTE Fellow status.