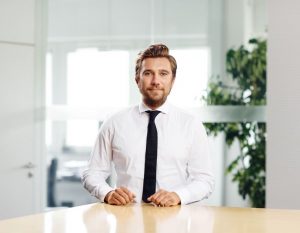 Germany-based broadcast products, rental and systems company sonoVTS GmbH has announced that it has established a cooperative partnership with Broadcast Remote Global (BRG) Ltd, the UK-based video production service company. The new agreement – which is to be officially signed tomorrow at Broadcast Asia (Suntec, Singapore, 26-28 June 2018) – will initially focus on developing shared interests in China, with the burgeoning eSports market expected to provide particularly exciting opportunities for the two companies in the coming years.

The collaboration has its origins in a long working relationship between sonoVTS Business Development Manager Bart Meeus (pictured) and Colin Cradock, who is the owner of Broadcast Remote Global and the Owner and Chief Executive Officer of China BRG. Meeus and Cradock worked together on “many major sports productions some years ago,” and since then Meeus has observed with interest BRG’s “ongoing expansion in China and other Asian markets, with Colin rapidly becoming an influential participant in the emerging eSports broadcast and events industry.”

Since 2014 Colin has serviced numerous eSports events from Korea to Los Angeles, including the Formula E Grand Prix and Riot Games World Finals, as well as overseeing the development and build of new broadcast studios worldwide. sonoVTS – whose extensive system design, integration and service capabilities are augmented by an increasingly powerful manufacturing offer that includes the HDQLINE series of modular videowall and IP-enabled broadcast displays – has also been collecting some significant references in this exciting market, and together the two companies are confident that their complementary skillsets can make them a dominant force in the Asian eSports industry.

“IP is going to be very important in giving eSports producers the flexibility and functionality they require to undertake events of increasing complexity,” says Meeus. “With our latest IP-capable displays – as well as our expertise in designing and developing OB facilities and flypacks – we believe that we will be a valuable partner to BRG as we jointly explore the incredible opportunities presented by this dynamic market. We are also in the process of developing new solutions geared specifically towards the requirements of eSports.”

With live stage performances and Augmented Reality (AR) also being added to eSports events formats, Cradock believes the time is right for a partnership able to offer such a range of technical capabilities and future-proofed solutions. “As Bart has remarked, BRG will be the ‘eyes and ears on the ground’ for the partnership in China and elsewhere in Asia as the eSports market matures to become a permanent element of the sports and events industry,” he says. “In combination we will have a very strong offer to put to event organisers and broadcasters wishing to accommodate the growing expectations of audiences watching both at eSports venues and on mobile and OTT platforms throughout the region and beyond. We have already had some positive conversations about specific projects and look forward to making further announcements in the near-future.”