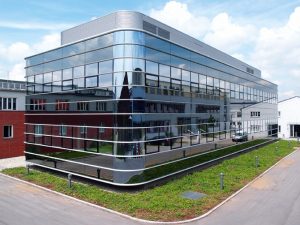 The new Plazamedia facility near Munich

The leading German media production company – which has a particular specialism in generating live and non-live sports content – is renowned for its use of cutting-edge technological infrastructures, and it is within this spirit that it has decided to implement a comprehensive IP production infrastructure at its new broadcasting centre in Ismaning, near Munich.

For more than 40 years Plazamedia has been at the forefront of production and delivery, latterly producing, managing, archiving and distributing content on a multitude of leading platforms. Having been among the first companies to adopt extensive file-based workflows nearly a decade ago, it should come as no surprise to discover that it is now embracing an entirely IP-based approach to production at its new broadcasting centre, which is scheduled to be operational in time for the start of the new Bundesliga season on 24 August.

The new centre – which was designed by Plazamedia – puts the onus on flexibility and the fast, efficient production and distribution of content. A maximum data throughput of 12.8 terabits per second sets a new standard in the broadcast sector, while the massive IP-based crossbar system based on Lawo and Nevion devices replaces the 17 formerly used video routers and manages the entire signal distribution and signal processing.

Plazamedia will be able to help broadcasters work the way they want to with production, workflow and media asset management capabilities from remote production to the cloud. A flexible, scalable media platform supports live streaming and broadcast-quality video-on-demand offerings, while virtual servers and high-availability storage systems – both on-premise and in the cloud – facilitate powerful and endlessly flexible media management, processing and archiving.

Incorporating a multi-functional design that allows rooms to be used in smaller or larger formations as required by the needs of each project, the new centre features systems from some of the most respected manufacturers in the business. Lawo’s VSM broadcast control system is integral to the specification, allowing user interfaces and control panels to be configured almost freely within the fully redundant system – making it possible for them to be adapted specifically to the various application areas and workflows of Plazamedia.

The centre has been developed with a watchful eye on emerging technologies that are set to dominate broadcast production over the next few years. As might be expected the facility is posied and ready to support UHD production, but attention has also been given to the rapid growth of online services with a renewal and extension of the existing streaming and OTT delivery platform. A powerful multi-CDN – deployed, if required, with comprehensive rights management – will ensure the cost-effective and high-quality distribution of the broadcast streams.

sonoVTS is serving as the systems integrator for the entire project, continuing a long and productive association with Plazamedia. Franz Olbert, Managing Director of sonoVTS, comments: “This is a truly groundbreaking facility with the capability not just to support the production workflows and requirements of today, but those of tomorrow and for many years hence. We believe it is the most flexible and powerful broadcasting centre of its kind, and we are proud to be playing such an important role in its delivery. Once again, the collaboration with Plazamedia has been brilliant and constantly creative.”